It is also said that Begum Ra’ana Liaquat Ali Khan, who was facing the biggest challenge of her lifetime, was confronted with evidence of those involved in the plot to eliminate her husband and she chose discretion. She may have learnt some lessons from Ms Fatima Jinnah’s case who defied the powers that be and had been ostracized by the ruling elite. Yet in her forties, Ra’ana Liaquat took a deliberate tilt against defying the authorities while upholding her integrity and principles, realizing that she could devote more attention to her lifelong causes more fearlessly. Thus Ms Fatima Jinnah and Begum Liaquat Ali Khan chose to pursue somewhat different paths. 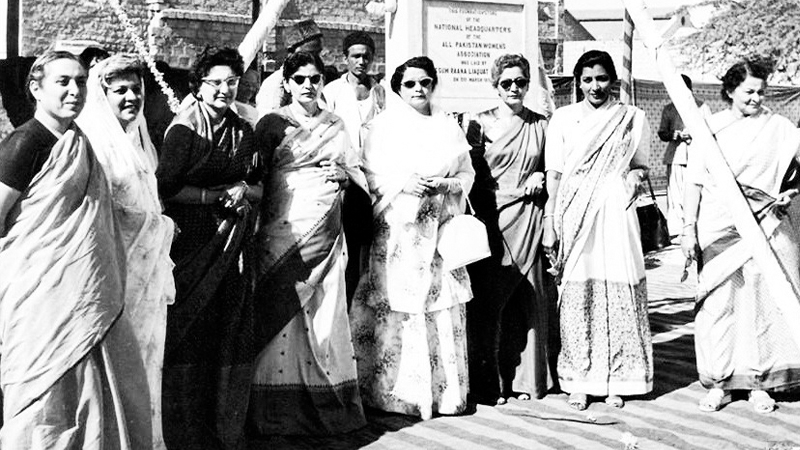 After her husband’s death, Ra’ana was first sent as a Pakistan delegate to the United Nations General Assembly and ILO in 1952. It may be mentioned that her husband had spurned a visit to the USSR after accepting it, and proceeded instead to the United States in 1950. Much has been written on this clear foreign policy direction that we embarked upon early in our national history. It has also been hypothesized that this course was actually charted by the Founder of the Nation at some time even prior to the creation of Pakistan. Anyhow, Begum Liaquat Ali Khan made her mark during the USA visit meeting the Trumans, state governors, senators, Congressmen and entrepreneurs like Walt Disney and school children with equal ease. She addressed a huge Town Hall meeting in New York and advocated for women’s rights at each forum.

The first major landmark in her career came in 1954 when she was appointed as Pakistan’s Ambassador to the Netherlands and became the first woman in the Muslim world to hold such an appointment. Although this prolonged responsibility had an adverse effect on her national activities, she pursued her diplomatic pursuits with great dedication completing two 3-year terms in Amsterdam till 1961. She ended up being the senior most diplomat there as Doyen of the Diplomat Corps and was decorated by Queen Juliana. She had brief stints as Ambassador in Italy and Tunisia as well during 1965-66 and was decorated with a high award by Italy as well.

President Ayub has also recalled meeting her in Europe while he was returning from the USA after meeting the Secretary of State, John Foster Dulles, and his brother Allen Dulles, the CIA director. Begum Liaquat apparently told him in end-1957 that Pakistan needed a continued rule of ten years to give it stability. It goes to her credit that Ayub Khan certainly acted on her advice and remained in power until a few months after celebrating his “Decade of Reforms”. Coming events cast their shadow! In 1958, she received the Nishan-i-Pakistan from President Iskander Mirza, yet she would support Ms Jinnah in the presidential election in 1965 against Ayub Khan. As mentioned before, she never compromised her integrity for worldly gain.

On 15 February, 1973, Begum Liaquat AIi Khan took oath as Governor of Sindh, securing the distinction of being the first female provincial governor in Pakistan. President Zulfikar Ali Bhutto had very high regard for her and accorded her the utmost respect. She resigned after her three year term in 1976 to be succeeded by the Nawab Dilawar Khanji of Junagadh. Bhutto who has taken over as Prime Minister in August 1973 wrote to his Cabinet Secretary Vaqar Ahmad that by appointing the Nawab of Junagadh, he had paid all his debts – a reference to the appointment of his father Sir Shahnawaz Bhutto as the Deewan (Premier) of Junagadh in early 1947 before Independence.

As the Sindh governor, it seems her meticulous economics, that was the defining characteristic of our founding fathers, came into play again. Every cup of tea or coffee was accounted for if a visitor came to meet her. She would write chits like tea for me and so and so (the visitor) and regularly audit them. At a Rotary Club luncheon decades ago, the late Mr Ahmed EH Jaffer would relate to us how Mr Jinnah would himself be switching off lights personally in the Governor General’s House. A glimpse of that rigid accountability was witnessed during Begum Liaquat’s tenure whose husband had also left her with precious little despite being all powerful. It must not, however, be assumed that she was stingy. The banquets during her time were quite lavish and left nothing to be desired; it was her abhorrence for any waste that was significant. 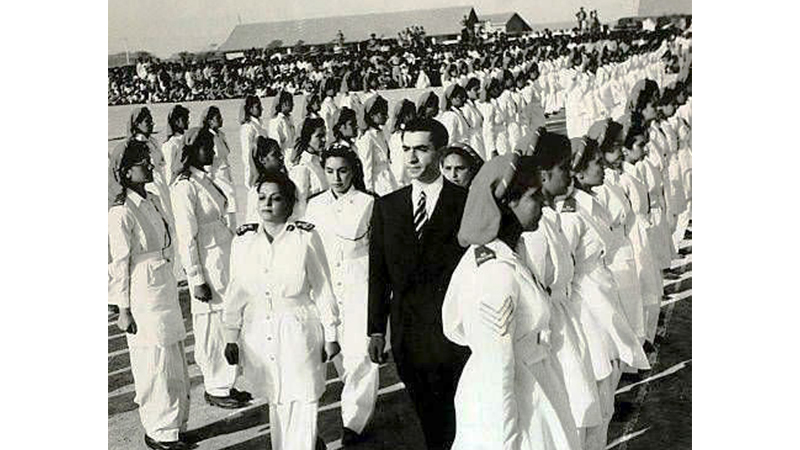 As a young medical student, I myself visited the Governor’s House once to seek a message of Begum Liaquat, who was also the Chancellor of all the public sector universities in the province, for the annual magazine of Dow Medical College. An ADC asked if I would like to meet the Governor and I responded that she would be rather busy and this was a routine request. Her military secretary at that time was Commander M Farhat Ali Khan and her secretary was Ms P Miles, an associate from her APWA days. In a few days, I received a very well-written message indicating her attention to detail and not just signing on the dotted line. It also indicated she had capable people working for her.

Once Prime Minister Bhutto actually asked her why her husband had not gone to Moscow. Pat came the reply, “Because it was Ramazan”

There are several anecdotes relating to that period, but I will restrict myself to two or three. With Mr Bhutto assuming power, Major General Akbar Khan was taken out of retirement and made National Security adviser. This was the same person who had provided stewardship to the Rawalpindi conspiracy case. History had come full circle! Although Akbar Khan may not have been directly involved in the assassination of Prime Minister Liaquat Ali Khan, he had certainly planned to oust him and anything can happen in the heat of the moment during a coup de tat. Once at a banquet, Ra’ana Liaquat would say: “I see General Akbar Khan here – General Akbar Khan not yet Field Marshal.” The point was made.

Once Prime Minister Bhutto actually asked her why her husband had not gone to Moscow. Pat came the reply, “Because it was Ramazan”. Everyone there burst out laughing. Liaquat Ali Khan made no secret of his liking for strong drinks. A declassified CIA document had even complimented him on his high threshold for drink while another is somewhat mystifying particular in relation to his wife. It describes him as “astute, capable and reliable, but handicapped by ill health. The influence of his ambitious wife, the Begum Roana (note the incorrect spelling in this 1947 communication) is said to result sometimes in his manifesting an opportunist attitude contrary to his innate honesty. He is decidedly friendly to the US and cultivates Americans. He is highly esteemed by those British officials who have served with him.”

It is true that Ra’ana Liaquat was by no means a traditional housewife and may even have been regarded by some conservative elements as a radical feminist, yet this comment about her when her spouse was just taking over the helm of affairs in 1947 is rather confounding. Another interesting incident happened when a head of state was stuck in Karachi due to a flight mess-up in the dead of night and Prime Minister ordered the eminent personalities to be set up in the Governor’s House. This must obviously have been unsettling for Begum Liaquat who was around 70 years old then. In the morning she told her nephew who was directing the Foreign Office in Karachi: “Please tell your Prime Minister, the Sindh Governor’s House is not a hotel”. The next day the Prime Minister was personally there in Karachi to apologize for her discomfort. Those were the days!

Here I must pause and mention that even while holding her high office, Begum Ra’ana would never ignore the affairs of her main offspring. In 1949, she had arranged a huge national conference with scores of dedicated women from all over Pakistan to form a non-political organisation for the social, educational and cultural uplift of the women, named All Pakistan Women’s Association. She led the organization right till the time of her death. The next year in 1950, she had stated in the Town Hall meeting in New York: “In Pakistan, we are not going in for any sort of domination by priests or fanaticism or intolerance. What we wish to emphasize are the basic Islamic principles of equality, brotherhood, and social and economic justice.” 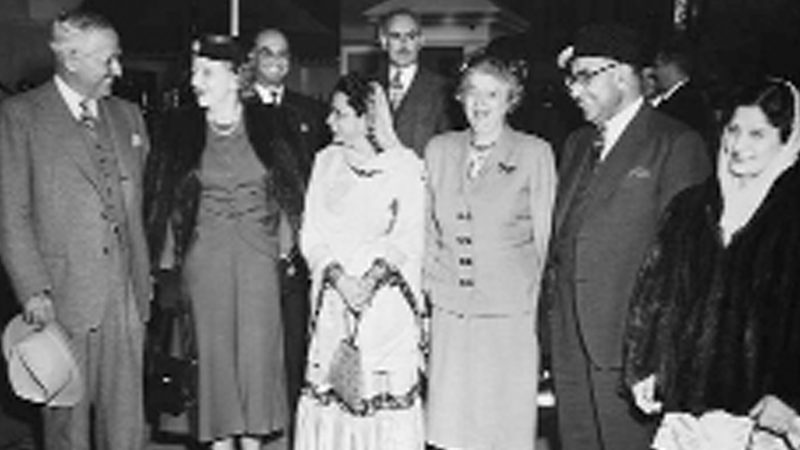 After leaving the Governor’s office, she could devote more time for her work but the greatest challenge in her life was yet to come. Martial law was imposed by General Ziaul Haq in 1977 who in less than two years unjustly executed Zulfikar Ali Bhutto and set into motion a process where laws were introduced under the garb of religion that disproportionately affected women.

Mr Bhutto’s execution had a shattering effect for the great lady who is said to have wept continuously for several days after the event. She also took on the regime for its so-called Islamization. One of her significant statements was: We did not create Pakistan to spy on whether people were praying or not!

The general was obviously not amused – her meager support allowance of Rs 2,000 per month was stopped although she was not physically harmed. Obviously Ziaul Haq was conscious of her undeniable lofty position in society, which kept him falling into a major blunder. She was not deterred and suddenly was acting just the way Ms Fatima Jinnah had after her brother passed away. During those difficult times of unnecessary suffering for most women, she was adamant in issuing statement after statement against the authorities. The United Nations awarded her its Human Rights Award in 1978. However, in 1980 she suffered a bad fall and had to be operated upon for her hip joint replacement. Thereafter her health deteriorated, yet she minced no words in her opposition to laws and edicts that she regarded as discriminatory to women, while having little to do with the true spirit of Islam.

Begum Ra’ana Liaquat Ali Khan died on June 13, 1990 at the age of 85 years and was buried next to her husband in the precincts of Mr Jinnah’s tomb. What a great loss that was for the country, yet how profitably she had used her life in the service of the women of Pakistan. She always exuded grace and charm wearing the traditional gharara. Thirty years after her death, we can be undeniably proud of her great legacy and contribution to public life in Pakistan, and highlight her monumental qualities for the benefit of younger generations who may not so much as heard about her in this unforgiving and fast moving era. May her soul rest in eternal peace!