I have a dream that one day this nation will rise up and live out the true meaning of its creed and we hold this truth to be self-evident, that all human are created equally. I have a dream that my four little children will one day live in a country where they will not be judged by the color of their skin but by the content of their character. 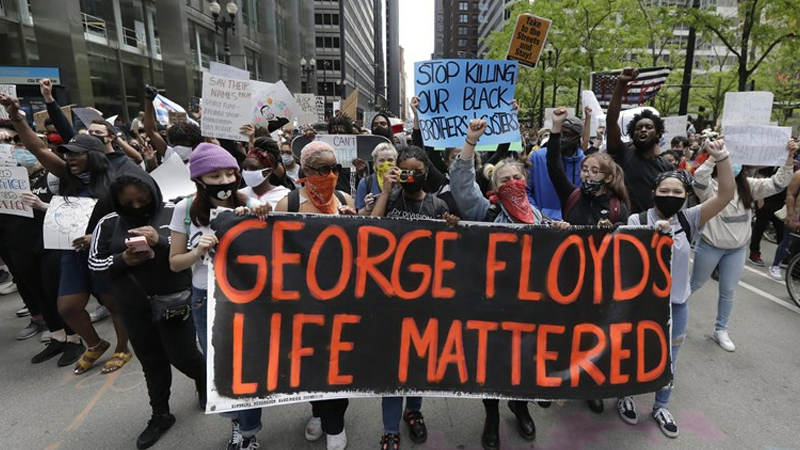 Martin Luther king junior delivered this remarkable speech “I have a dream” during the US civil right movement. Unfortunately, after decades, King’s dream did not come into reality. Legacy of slavery continues to have an impact on the position of black people in American society even 155 years after the 13th Amendment abolished slavery in the United States.

He was groaning, “I can’t breathe, I can’t breathe” and “Don’t kill me!” These were his last words. George Floyd African-American, unarmed and handcuffed, has been killed by a white police officer who pinned him to the ground with a knee on his neck. The officers were responding to a call from a grocery store that claimed Floyd used a fake $20 bill. Police said he physically resisted officers. Global outrage sparked when a video of Floyd’s arrest was seen by millions around the continents. It displays Floyd lying on the ground with white officer Derek Chauvin’s knee pinning him to the ground as he begged for air to breathe. Through footage it can be seen, Minneapolis Police officers use excessive force, although Flyod was not resisting arrest.

Floyd’s death reminds us of Eric Garner, an unarmed black man who died in 2014 after being placed in a chokehold by New York City police and pleading: “I can’t breathe.” Garner 43, father of six, was arrested on suspicion of allegedly selling loose cigarettes on 17 July, 2014. After the incident Daniel Pantaleo, a policeman who murdered Garner, was put on desk duty and faced charges. An NYPD (New York Police Department) departmental judge has suggested that Officer Pantaleo be fired for his involvement in the 2014 death of Eric Garner. The verdict, which is non-binding, found Pantaleo, 33, guilty of using a chokehold on Garner but not guilty of aggravated assault. Another black man was murdered by a police officer, six years after Eric Garner’s death; with his last words being the same “I can’t breathe”.

George Floyd’s last words speak to the truth of black life in America. Black people have experienced discrimination or have been treated unfairly because of their race or ethnicity. Black people in the United States are bearing the brunt of indiscriminate behavior and wrath of white supremacist. Some of American states where racism is at its peak. Black life has always been criminalised and dehumanised in America.

During Barack Obama’s presidency, Michael Brown, Eric Garner and countless other unarmed African-Americans were killed by police, but with a black president many Americans felt progress was attainable. Social media raised awareness on these injustices and helped to create the “Black Lives Matter” movement. Now under racist president Donald Trump indiscrimination against Black people has been and white Americans supremacists are being encouraged to re-employ black codes.

Racism is a doctrine of, by, and for fanatics

US police often involve discriminatory acts against Black American. Racial disparities in police use of force, arrests, citations, road and traffic stops continue to exist. Black residents consistently reported experiences of abusive policing. As per Washington Post, 1,004 people were killed by cops in 2019, Black Americans are killed by police at a disproportionate rate even though blacks make up 13 percent of the population. As per an analysis conducted by The Guardian in 2015, 1,093 people were killed in police shootings that year. The report also noted that black men were nine times more likely to be killed by police than other Americans. Stark racial disparities exist in the prison population; African-American adults are nearly six times as likely to be imprisoned or jailed as white adults, the imprisonment rate for black men are almost six times the rate for white men, among black women it is nearly twice as high as among white women according to the Sentencing Project watchdog group. Generally in America destitute people are African-American and they remain behind the bars for long periods of time awaiting trial because in minor offences courts require money bail as a condition of release.

The US, the so-called champion of human rights, always prosecutes and victimizes other states on the rhetoric of human rights. The Trump administration is holding China, Iran, Russia, Afghanistan, Cuba, Syria, South Korea and Venezuela responsible for severe human rights violations and tarnishes the images of these states over the globe. But according to the PEW research center report, about eight-in-ten blacks (78%) say the country hasn’t gone far enough when it comes to giving Black people equal rights with whites. Two-third say it has become more common for people to express racist views since Trump became president. Black people are treated less fairly than whites in employment situations (86%), in stores or restaurants (73%), when applying for a loan or mortgage (78%) when seeking medical treatment (61%), pay or promotion, an employer in hiring and they have been unfairly stopped by police.

The police killing of George Floyd comes on the back of two other killings of black Americans in recent weeks. Video of the murder of Ahmaud Arbery, 25, from February began circulating in May. He was jogging through a neighborhood outside Brunswick, Georgia, when he was shot dead by two white men. Just a few weeks after Arbery died, Breonna Taylor, 26, certified EMT, was killed in her bed at home by police officers. President of the Minneapolis chapter of the National Association for the Advancement said, “Enough is enough, colored people are done dying, we want to see them prosecuted”.

The killing of Floyd was a sparking point. Demonstrators filled the intersection where Floyd was pinned down, chanting “I can’t breathe” and “no justice, no peace”. In Minneapolis and St Paul where peaceful protests have turned into riots, following clashes with police. On Thursday night, demonstrators set ablaze the police precinct in Minneapolis and it continued to burn on Friday. Minneapolis Mayor Jacob Frey has imposed a curfew on the city beginning Friday night. Protests have also taken place in Chicago, Oakland, Los Angeles, Columbus, and New York.

What the world saw in the street of Minneapolis, Minnesota, was a public lynching without a rope. Martin Luther King once said, “Our lives begin to end the day when we become silent about the things which matters”.

The writer is a public policy analyst and has an interest in geopolitics. He tweets @OmerAliAwan and can be reached Omaraliawan14@gmail.com