Locust is very well known to the people in the world because it has been existed in the world for centuries. It is competing with the human for food and shelter for so many years. In Pakistan, the topic of locust is also not new or monstrous but the realities are very alarming. It has entered Pakistan like a silent killer. It has attacked on millions of acre in Pakistan and destroyed. Pakistan is leading towards food insecurity due to its attack. Pakistan government has declared emergency to control locust in different areas of country in Feb. 2020. 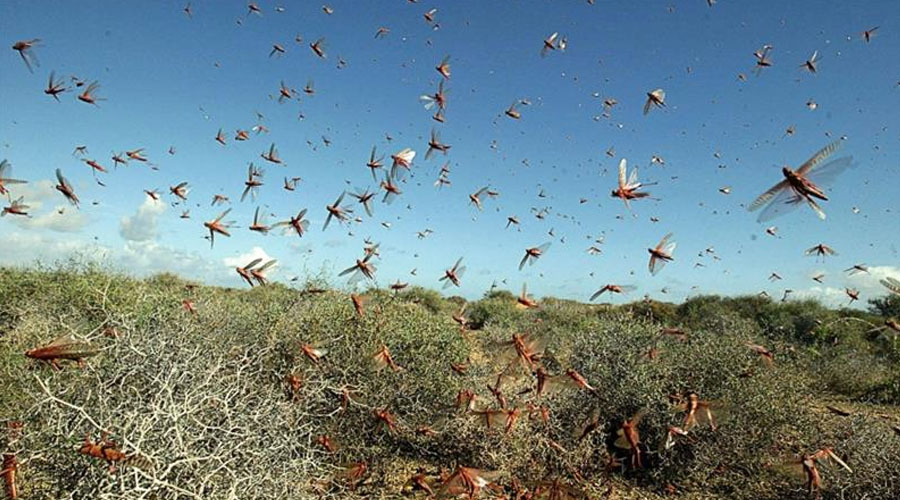 Locust is the members of class insecta, having order orthoptera and family Acrididae. These are winged insect in their adult phase and can fly up to 150 km in day light. These insects have two phases; solitary and gregarious. Mostly, these insects live in solitary form but due to some micro and macro environmental changed like drought or rapid vegetation growth, serotonin hormone produced in their brains which triggers certain changes to locust brains, so they breed rapidly and form gregarious form which act as migratory phase. When a certain level of population builds up of wingless nymph (immature stage of insect), it later becomes swarm of winged adults.

In Pakistan, locust appeared in April 2019. It migrated from Sindh and Balochistan to different other parts of country like south Punjab and then passed by desert areas of India adjacent to Bahawalpur division July 2019. The swarms settled in different areas of Punjab because these insects can only fly in daylight and after dusk the swarms settles on trees like Kikar, Karir, wheat and canola crop and on desert. They lay their eggs there. Nowadays when the temperature is rising, eggs hatch in desert areas where the previous swarm settled, the nymphs feed in desert areas of Cholistan then form small swarms of adults and damaging the wheat and canola crops in Bahawalpur Division. Their habit is to fly downwind so the swarms scattered in different areas of Punjab like Lodhran, Multan, Khanewal, Sahiwal, Toba Taik Singh, Faisalabad, Khushab, Bhakkar and Layyah districts.

In all these areas, locust is damaging the crops like cotton, maize, fodder crops and orchards. Most of the damage was observed in those areas where the farmer community was unaware of its attack or they were not present in their fields for drum beating or to make noise because locust behavior is to avoid noise.

After the announcement of emergency on locust in Pakistan, different departments are working together to control the pest attack. The agriculture department, districts administration, livestock department, the PDMA, the NDMA and army are the departments taking part in locust control. Currently, the control of locust is done through Lambda Cyhalothrin (Chemical). Due to non-resistance of this insect pest, this chemical is controlling locust very efficiently. The overall mortality rate – 85-95% – is reported in targeted areas. Chemical is sprayed through Plunger Pumps, Knapsack Sprayers and also through helicopter. Combat operations against locust are being carried out in different areas of Punjab by the agriculture department and by army in collaboration in the night where the locust settled.

After the announcement of emergency on locust in Pakistan, different departments are working together to control the pest attack

Surveillance of locust is being carried out in every Punjab tehsil and the movement of locust is predicted by the Pest Warning & Quality Control of Pesticides, Punjab Department. Also, the settled places of locust are shared with other stakeholders, and after that combat operations are started there but resources for the combat operations are scarce. The whole settled areas cannot be covered during the night. About 10% of the area of settled locust is covered during night operation and remaining 90% swarm flights next day towards its destination. Ariel spray is not also giving satisfactory results in control of locust.

Because we are now facing the local breed of locust and the chemical is not covering the whole infested areas and some of the insects remaining alive after the chemical spray, so resistance and co-resistance against the Lambda Cyhalothrin may also be the next our challenge in the management of locust.

During the surveillance of locust, it is observed that after changing from nymphal stage to adult form, it travels towards desert areas for its next breeding. Mostly, it settles on the big trees like Kikar, Eucliptus and other tall trees and very minute numbers on the crops. Next day, it resumes its flight towards its final destination so by observing its behavior, here are some suggestions for effective control of locust in Pakistan.

1. Surveillance of swarms should be done in the desert areas to observe its egg laying, nymphal and adult stages.

2. Bait application, barrier treatment or the chemicals spray through plunger pumps or by aerial spray should be done before the flight of the insect in desert areas.

3. After the flight, awareness among farmers should be increased in predicted infested area for drum beating in the field so that it will settle on the trees rather than the crops and chemicals spray should not be used in cropped areas.

4. After the completion of its flight towards its final point, it starts egg laying, so and dunes could be identified and ploughing should be done there to expose the eggs in the sunlight so that they cannot hatch. This could be done by deputing the technical officers and officials of Pest Warning Department and by offering them specialized vehicles for survey at the breeding sites of locust.

5. If the eggs hatch, there are 21 days for which nymphal stage of locust remain during which it cannot take flights, so in the nymphal stage, it can be controlled efficiently by bait application or aerial spray in the desert area.

6. Should not waste resources during the combat operations in cropped areas because it is not controlling the locust effectively.

The writer is agriculture officer, Pest Warning and Quality Control of Pesticides, Punjab. He can be reached at awaisawanaopp@gmail.com