I came across an article in The Daily Times which highlighted some of the embarrassing, uncalled for and childish activities of the new VC of GCU.

A further amusing surprise came when the incumbent VC decided to defend those allegations publicly in the same newspaper. Quite interestingly he himself argued to prove the justification of his appointment. It is unheard of that a sitting head of an organisation would go all the way to plead his case publicly. Perhaps empty vessels need to make a loud noise.

Holding a Dutch nationality cannot be rated a qualification or a disqualification. Many Pakistanis who work abroad obtain nationalities of different countries to ensure more security for themselves but they also prove a point that how little faith they have in their own Pakistan.

The GC has seen some great principals in its long history

Even being selected out of 200 candidates by the selection committee does not prove that the rest of the candidates were not as good as him. Nor it proves the selection of Dr Asghar Zaidi was a better choice. Surely there must have been other candidates who if not better were no less. Some of them could have been better with more experience regarding GCU and could have been more suitable for the institution. Who knows how short or long the stays of the present VC were at the universities of Oxford and Seoul? However it appears that he did not gain or develop enough confidence, restraint and grace to be above his personal self. Otherwise he would not be putting up his pictures in the media on the slightest pretext. As soon as he got his appointment as VC of GCU, he immediately resorted to a ‘Selfie’ kind of a love affair with himself. His pictures appeared on his business cards, media and GCU Diaries. All this was done in poor taste for self-projection only. He could not even wait to put up his own picture in his office with the former Principals and VCs. Such a picture is only traditionally placed when the office bearer departs.

A big question mark thus hangs as to how and why the present VC was found suitable for the GCU especially when due to his very short stay at the Government College in 1983-84 he could not have had enough time to imbibe the true spirit, culture and traditions of this great Alma Mater.

The GC has seen some great principals in its long history. There were men of great stature and presence like Prof. Sondhi, Patras Bokhari, Prof. Sirajuddin and Dr Nazir Ahmed who would never have stooped low to give public clarifications that how they were addressing issues at several levels on daily basis, nor they would have gone for cheap publicity and unnecessary photo sessions. They would never have pleaded to justify their selections as Principals. No gentleman does. 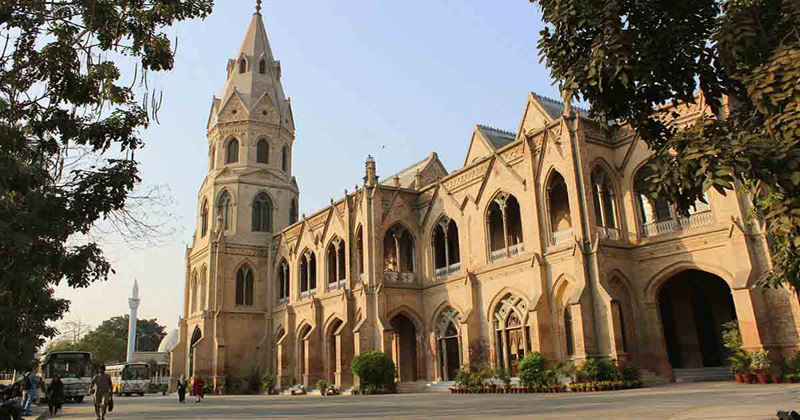 The cultural and traditional decline of the Government College started many years ago. To please a Governor of the Punjab, a stone plaque depicting the inauguration of Government College University was placed at the main door of the main hall on September 20, 2002, by breaking the wall of the heritage building which was not only a complete sacrilege of the historic building but was also an act done on a whim without a thought. The sanctity of the historic and heritage building was trampled ruthlessly for the sake of an out of place plaque. Government College University does not belong to one person only. It belongs to all the past, present and future generations of Ravians. Its spirit, values and traditions cannot be allowed to be thrown away to the winds. Among other activities that broke the hearts of so many traditional Ravians recently, include the putting up of huge life size banners with the pictures of the Punjab Governor, Minister for Health Punjab and the VC himself everywhere within the campus and also on the main entrance and the driveway. Even the old tower was not spared where a similar banner was hung. The insecurity and the self-possessed personality of the VC left no stone unturned for this garish display of banners which is a reminder of the days when McLeod Road, the hub of cinemas in Lahore, used to have publicity banners hanging on the cinemas which were bigger than the buildings. The uncalled for banners at the GCU followed the theme of Local Bodies Elections with the pictures of the candidates and their supporters. Why Has GCU stooped to this level? How far can a self possessed person go to please his superiors? It should not be at the cost of the dignity of GCU. The sight is atrociously distressing and out of place.

All Ravians and the concerned should take notice and save the dignity of GCU from a narcissistic mind which is as damaging as the coronavirus.