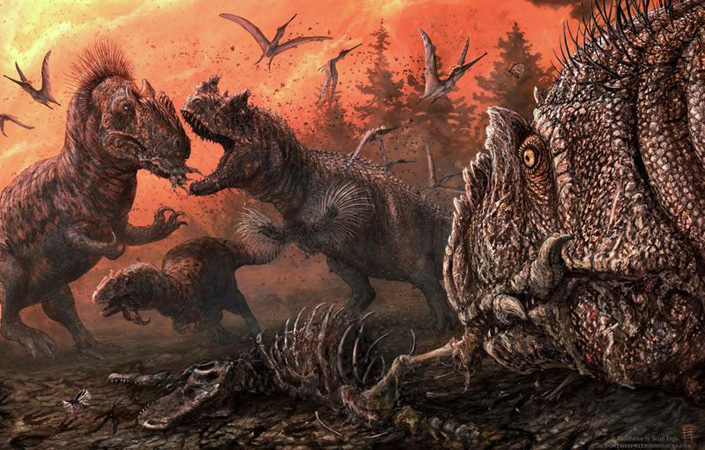 The dreaded dinosaur Allosaurus was the scourge of the Jurassic Period landscape some 150 million years ago, an apex predator just as Tyrannosaurus rex was 80 million years later during the Cretaceous Period.

And, like T. rex, Allosaurus may have engaged in cannibalism to keep its tummy filled during lean times, based on a western Colorado trove of fossils described by scientists on Wednesday. The researchers unearthed 2,368 fossil bones including several different dinosaurs and other creatures. Remarkably, 29% of the bones bore evidence of bite marks, a much-higher percentage than usual, indicative of heavy scavenging in what may have been a stressed ecosystem caused by a seasonal drought or potentially a wildfire.

Allosaurus, up to 33 feet long (10 meters) and 2-1/2 tons, was this ecosystem’s most-common predator. Most of the bite marks appear to have been inflicted by it.

Another surprise was that 17% of the bones of dinosaur predators – mostly Allosaurus – bore bite marks, even including small toes bones, suggesting Allosaurus was scavenging carcasses of its own species and perhaps actively hunting them. “Allosaurus was most likely an opportunistic feeder,” said University of Tennessee paleontologist Stephanie Drumheller, lead author of the research published in the journal PLOS ONE. “It probably ate anything and everything it could.”

Allosaurus becomes the third dinosaur to have strong evidence of cannibalism, joining North America’s Tyrannosaurus and Madagascar’s Majungasaurus. “Allosaurus might not have been as big as T. rex, but it was no slouch as an apex predator,” Drumheller said. “It was able to hyper-extend its jaw for a super-wide gape. It was a hatchet feeder like a hawk, meaning it would chop into prey with its head. It had long arms with grasping claws and a strong bite force. Track sites suggest it might have been a long-distance hunter that would follow herds for miles to pick off prey.”