Tiger Force and its implications

The economy of a country is the indicator of its socio-economic status/growth. Pakistan is among those few countries that have an approximately 65 per cent young population, most of which is wandering after jobs while jobs are shrinking due to the rapid increase in the population of Pakistan.

Zulfikar Ali Bhutto emphasised on birth control for a better future of the coming generations. This was not taken seriously, rather opposed by religious quarters and other politicians. In the recent past, I came to know that in 2016, a country in Central Asia had realised through studies that in the future two to three decades, they may only have a population either below 16 years or above 40 years and, thus, no workforce will be available to run their factories. This is because the new-born ratio has decreased due to “non-interest” in children by the new generations. Since then, they are focusing on attracting young ones from neighbouring countries to match their future demands through free training/workshops, which may become a lucrative offer for those who attended seminars. Similarly, some countries have announced easy access for student visas, as per press reports, like Canada and Britain, and have established separate counters to facilitate such students. This is going to be a brain-drain for under-developed countries. Intelligent students from our country are being given admissions immediately.

Now coming to the main point, here we are a nation doing nothing for the youth, which is a major part of our population, probably because of the lack of resources. All our political parties have student wings across the country but are using them as a political tool in general elections only. Nothing new is being done for the creation of jobs or business development prospects. Using student’s wings to pressurise other parties is a malfunctioning of politics. Let the new system be evolved through society. I agree that the imposed systems could never be successful anywhere in the world because of being formed without considering ground realities.

Since the creation of Pakistan, many administrative experiments have been done to date and many of those chains have already been broken like Local Bodies, Union Councils and Market Committees etc. 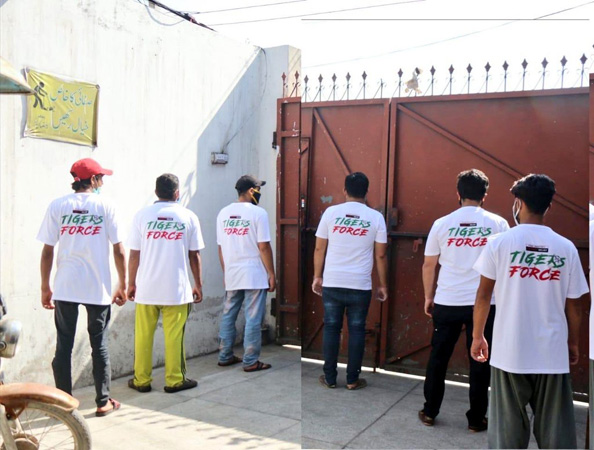 So far, all these are a source to allure peoples for jobs on political grounds that never produced positive results. This time, let a working force come out for the country, not for a party.

Presently, our PM Imran Khan has formed a new force (Tiger force), which is assigned to look after that broken chain on grassroots-level. This force is formed in the presence of police force, traffic police, city-district force (police), Dolphin and Razakar force. So what new will come out of this force, only time will tell.

As briefed, such force, persons/ recruited beyond merit can work for their well-wishers. The present government, as per press reports, is hiring a million people as a task-force to streamline the execution of its policies. I expect people available to be working in different fields with experience. They must be screened and then allowed to join and perform duties on local levels regardless of their affiliation with political parties. Such new recruitments across the country must be used for multiple uses, not only for the documentation for daily wagers. Why cannot they become a part of the team to report price hikes to inform authorities? Of course, they must be given some authority to send reports to competent authorities for challans. If possible, they must be given a role to interview masses with the help of electronic media. It would support the already functioning bodies. My objective is: if a new force is going to take off, do not waste new force for numbering daily wagers only but give it more duties, which may range from improving street-to-street relations to assisting all existing/available pressure groups at local levels. Those existing bodies are advised to harmonise coordination for a better cause and share their knowledge and available data because the new force is already supposed to work without political affiliations (we expect so). It is in my knowledge that officers working in development authorities and municipal corporations are doing their duties on dengue disaster; leaving their own offices unattended for the last 10 years or so.

SMEADA is also seen ineffective since long in both media and society. Most people are practically unaware of it and the fact that it can help boost small businesses and cottage industries. Let the new teams guide people and make them consider it a chance to promote business. The current price hike wave has gone high with the increase in electricity prices. There seems to be no authority to try to re-set the hike on a real basis. Concerned administration is responsible for higher rates in the market. The minister of transport is supposed to establish transport and travel fares. Similarly, after a reduction in petroleum products, prices of food items are to be revised by the ministry of food. Why are our food authorities not raiding markets after this extreme price hike in commodities prices? Media channels are reporting the skyrocketing rates of each food item but why aren’t the authorities doing anything?

The administration is neglecting price hike cries on media. What are the functions of the media-cells of all political parties? Why do parties only get serious about price hikes when they are in opposition? In the late 80s, I found chairman WAPDA oft-campaigning at national-level throughout the country about Kalabagh Dam; replying to media queries while some ministers also faced and replied to direct question-answers on live programmes. Never saw such live-shows again on media.

Top of all, will this force be run by a person, department/authority or organisation? If headed by a member of the parliament, how will it function without any investigative agency or authority and how will it be accepted or cooperated by people from opposition quarters, which are free to respond? If it goes under the district administration, how will that officer patronise without amendment in the parliament? If it will be working under the Federal Agency because of its scope in all provinces of the country, how will the provinces attend that force imposed by the federal government? Commonly, in our country, provinces are politically controlled by parties in the opposition so there is a chance of poor performance or a clash between federal and provincial forces in terms of cooperation in that particular province. A delay in the announcement of new force indicates that it was announced without spadework like some other projects. There is no harm in getting delayed but the announcement should have been made after making it acceptable to all concerned corners.

The writer is a Lahore-based senior journalist and Incharge of Readers Column, Daily Times, Lahore.