Remdesiver is an antiviral drug developed by a leading company, famous for antiviral drug manufacturing in California, the US. The FDA has authorised its emergency use for treatment in COVID patients; stating that the benefits of the drug outweigh the risks in patients. A double-blinded, randomised clinical trial by National Institutes of Health (NIH) on 1,063 patients in the US, Europe, and Asia showed moderate effectiveness in treating severely hospitalised patients of COVID-19 by reducing the recovery time to 11 days in patients treated with Remdesiver compared to 15 days for those who received the placebo drug.

Although a 31 per cent improvement doesn’t seem like a knockout 100 per cent, it is very important evidence of the concept because it has shown that a drug can inhibit the growth and load of this deadly virus.

The virus will persist until a vaccine is developed, irrespective of lockdowns, and we have to live with it until then, said Imran Khan

An adenosine nucleoside triphosphate analogue, the active metabolite of Remdesiver act via the mechanism to interfere with the action of viral RNA-dependent RNA polymerase and evades proofreading by viral exoribonuclease (ExoN), causes a decrease in the viral RNA production. But its predominant effect (as in Ebola) is to induce an irreversible chain termination by inhibiting the growth process of this virus. It is a pro-drug that is converted into GS-441524 in the body. Ribonucleotide analogue’s side effects may include inflamed liver and an infusion-related reaction with nausea, hypotension pressure and sweating.

Pakistan is about to start the production of this anti-viral drug, which has shown its effectiveness in treating the novel Coronavirus. Production will start within weeks, the federal de facto minister for health, Dr Zafar Mirza, and the CEO of a leading pharmaceutical company in Pakistan stated yesterday. 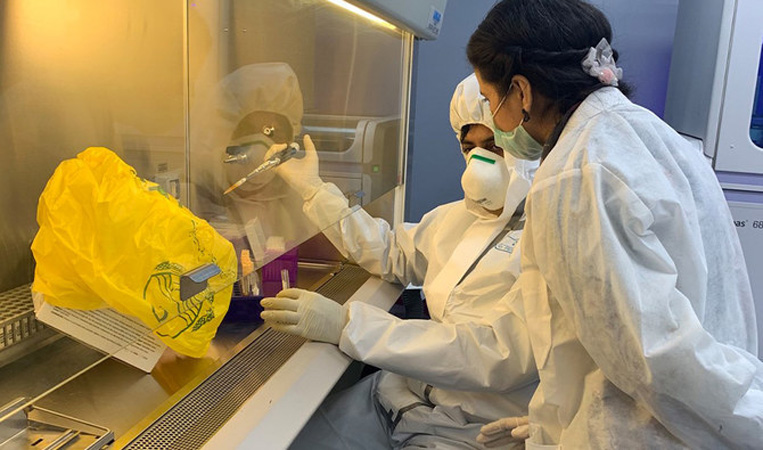 Pakistan will be among the three countries, which will not only start producing Remdesiver but also export this antiviral drug to 127 other countries to ensure its accessibility to the patients at a low cost. It will boost the economy of the country if we developed this amount of drug to be exported to other countries; easing the strain on the economy via its manufacturing capabilities.

Pakistan has recorded over 37 thousand COVID-19 cases and over 800 deaths. Lockdowns imposed to curb the disease’s spread are expected to cause the country’s economy to shrink around one per cent to 1.5 per cent in 2020. Despite an increasing infection rate, Pakistan has begun to ease the lockdown; opting for the strategy of partial lockdowns last week to avert an economic crisis.

“About 150 million individuals” across Pakistan, including daily wagers and labourers, are suffering from lockdowns. The virus will persist until a vaccine is developed, irrespective of lockdowns, and we have to live with it until then, said the premier Imran Khan in a statement.

Moreover, scientists are waiting for large-scale research trials regarding Remdesiver because, in any scenario, for a treatment to be validated and marketed, it needs at least two large-scale clinical trials to validate its effectiveness.

For the moment, one can think that it is certain that Remdesiver is the new standard drug for COVID, even if its effectiveness is not yet complete. However, it will be compared to other drugs currently being used to treat COVID.

The writer is a doctor by profession and a civil servant. He is currently serving as the Assistant Commissioner (UT) and is a Gold Medalist in International Relations (IR). He is Also a Visiting Faculty member at Civil Officers Academy. He tweets @sadiq_ac.