Sometimes is a labour of love 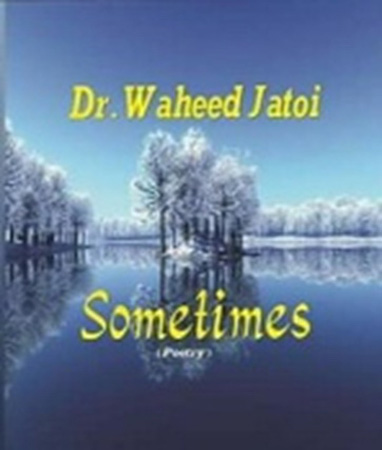 Thus, there are many authors and poets in Pakistan, who write in English language. Dr Waheed Jatoi is one of them. He is famous writer and poet in both English and Sindhi languages. He wrote a book namely “Sindhi Shairi Fun Kha Fikr Taaien” that is included in prescribed M.A Sindhi syllabus at all the general universities of Sindh. Moreover, his philosophy based “Wujudiyat Aien Sindhi Adab” (Existentialism and Sindhi Literature) is also praiseworthy work. Likewise, his book “Sometimes” is collection of his poetry in English. His poetry seems soothing shade for the wanderers of the hot desert of love, cool droplets of rain in scorching beams of the sun, and comforting morning breeze in which blooming flowers of emotions tosse their heads sprightly. In the book “Sometimes”, poet expresses feelings of love like John Keats, defines nature like wordsworth, mysticism like John Donne and Pope, and depicts bitter reality like T.S Eliot. He avoided verbosity in poetry by dint of this his poetry is in flowery language and touches chords of reader’s heart. In “Sometimes”, there are quatrains and couplets, free verse and rhymed verse. Poet marvelously gives the picture of his beloved by comparing her beauty with heaven:

Full of fragrance light and grace!”

Poet says that the talking of his loved one is poetic diction:

“Her talking is poetic diction,

“Her eyes are so blue and bright,

They enlighten the starry night!”

He feels her heartbeat like the music of rhythmic poems:

“My poems possess rhythm of her heartbeat,

And melody of the sweet frolic name.”

Furthermore, poet finds his dear one as the wax model and white pearl a golden doll.

“She – my love, the wax model, white a golden doll,

How can I buy her? for I don’t have the wherewithal!”

Poetry feeds our emotions with the charm of imagination but according to Mathew Arnold poetry is criticism of life so poetry not only gives pleasure with the help of imaginations but also depicts bitter reality of worldly circumstances. Similarly poet Dr Waheed, being a Ph.D scholar and great teacher, splendidly knows psyche of his society and in the one of his couplets defines clearly:

Success turns him timid, although be line!”

“Nothing can make you so aware,

But the moments of failure!”

In another couplet, the poet makes society look its black face in the mirror of his poetry:

“It is natural misfortune of our nation,

Where donkeys rule the great human!”

On the one hand poet admires women a lot in a great part of his poetry and on the other hand he clearly condemns and shows his anger for women. Although, poet has no hatred for women but he is feels sorry for the women who are statues of sacrifice and face cruelty without raising voice against it:

“How far it would have best and better been,

Had Shakespeare said, ‘Stupidity thy name is woman’!”

“How could she understand me?

Who herself needed to be understood!”

To me the poet who doesn’t praise his homeland on which got birth and brought up, his poetry is as as cry in wilderness. However, birth of literature is poetry and that is in epics which is adoration of heroism and patriotism. Likewise Dr Waheed also glorifies great sign of civilization Sindhi and its ever flowing the Indus river with romantic touch:

“As Sindh is in water and Indus in flood

So is my heart in love and she in blood,”

Hence, Dr. Waheed’s poetry is like the rainbow of seven colour in the sky of poetry in English. His poetry is love’s labour because poet spends night dreaming his beloved and passes day interpreting the dream. Book “Sometimes” consists lovely poems like Phoenix will rise again, Never ending pain, Selfishness, The friend, I am lost, Timeless beauty, and other. Sometimes poet takes us to get on flight of imaginations and enjoy the immortal beauty of of love. Sometimes poet makes us feel the pain of deceits. Book “Sometimes” is a garden of colorful and fragrant flowers that heals our soul.

The writer can be reached at Khaskhelipervaizali96@gmail.com