Whenever collective thought of societies discover any new dimensions of the nature it has affected the entire mind fabric of prevailing intellectuals and common person of that era. Einstein’s theory of relativity has paved a road to many scientists and theoretical physicists to explore countless hidden dimensions of nature which were impossible to explain through Newtonian Classical Physical Laws.

The theory of relativity has gone through about a 100 years of time of advancement and has reached to String Theory (The Theory of Everything). This theory of everything, at fundamental level, has combined all the four forces of nature in one equation which were used to be explained, earlier in different equations separately. The same theory also opens up new horizons of thoughts, with scientific references, and solid proof of existences metaphysical world. Scientific explanations of existences of metaphysical world have inspired every walks of the life from inventions of lasers to quantum super computers to philosophical and spiritual arguments for the proofs of existence of super natural power.

The involvement of conscious at very quantum level to study the behaviors of energy and particles, scientifically, has changed the entire perspective to analyze things because both, energy and particles possess dual and interchangeable properties of energy and matter, at the same time. Determined conscious addresses to obvious three or four dimensional behaviors of matter to senses but the theory of everything also leads to dimensions beyond the four dimensions, to twelve or even more up to 24 or 48 dimensions at strings & then to fundamental particles of quarks level. With the result, the dual behavior of existence of something forces someone to visualize the others aspects which are not quite obvious to them, consciously. This phenomenon provides logical background to accept, even without involvement of conscious, the hidden dimension of existence, which is proven by the theoretical physicists and mathematicians in relation to dark matter and dark energy as major part of approachable universe. The existence of beyond the visible has also inspired the artist’s community of South Asian countries, including Pakistan.

One of the example is the recently paintings exhibition for general public by AyishaArshadShahnawaz (AAS-??) at Lahore-Pakistan.

Painting’s Exhibition held by AAS-??, at Alhamra Art Gallery, Lahore, successfully ended on November 26, 2019. The success of exhibition was a witness to the height of vast understating of the scientific interpretation of physics and metaphysic through the medium of paintings. Her grip to the subject “The String Theory” in the overall theme of the exhibitions then to maintain it with the same interest within a single painting with different titles reflects real intellect level of her mind. Amalgamation of Scientific Theory and Art of Painting is a real achievement of AAS.

The subject itself is not a new subject; rather, it remained ever part of the arts expressions. But, ability of the artist to understand the contemporary depth of quantum physic through calculus and advance mathematics and its latest theory about visible and invisible universe then to interpret it in the languages of light and dark, colors, lines, tones and textures in paintings makes it distinguished from the all others and provokes voice of the present times. 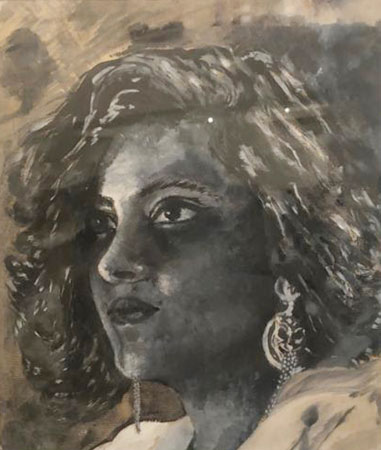 Use of modern metaphors emerging out from quantum fields’ invisible energies of strings’ vibrations to form some quantum fundamental particles of the visible universe do reflects the artist’s intake and the crafting aptitudes to transform on the surface of the canvas.

Every individual painting with different title and content is showing her mastery to provide a complete balance in her knowledge and thoughts. Somewhere dots in her paintings giving shape to lines and sometimes redshift in the colors appear to form figures and letters do compliment the oscillating strings vibes appearing into contented visuals of shapes, volumes and figures. Nevertheless, painting’s blank areas are still giving meanings to white holes connecting visuals of these paintings are the projections of paintings existing in the parallel universes.

AAS’s-?? insight does not limit to the effects of String Theory on visual arts, it encompasses also, hard times of the humanities in the history on different locations on the globe, the links of advancement of human ancestors’ movements from one area to another to form so-called civilized nations of the their times. Keeping herself within mood of series of paintings on String Theory and giving thanks to the old masters, by adopting some of their simple geometrical compositions and shading those with tones and impressionist techniques is also another aspect that gives her stand on the irreplaceable position in the contemporary intellectuals’ community of artists.

Her vast study grasps and unifies her ideas of all paintings to depict her own personality. Bench mark of history in 1150 BCE for Music of Strings of Mycenaean’s and the loss of Indus Valley People, the cyclic movement of happenings vide “Big Bounce” resulted into “Big Bang” the first cosmological event (genesis), numerology and positivity, excellence without tragedy, spiritual mindset of Pope Innocent of Rome versus Sir Francis Bacon of England, Blood Diamond, History of Unknown Heroes, Gratitude Towards Grate Painters like Frank Stella & Barnett Newman and Contour Map of Universe are those topics which reveal her higher level of efforts to reach such uttermost intelligence.

The painting with title “Black on Black on Black”, though it is referred by painter herself as minimalist work inspired form Frank Stella & Barnett Newman’s principles, even then its technique of painting, layer by layer and spots of black and white color on layers, takes the viewer’s thoughts beyond the limits of four dimensions on two dimensional surface of canvas. It would be better to say that the mood of the painting will always open new horizons for any spectator according to his/her own vocabulary imbedded in the mind. Its hidden meanings are as vast as the universe itself. Furthermore, the beauty of the paintings can be enjoyed while seeing textured surface and understating the subject together, the more you will involve yourself in it the more it will synchronize with the vibes of pleasure state of mind.

AAS-??, being a teacher and mentor has given a message to open new avenues of hope and inspirations for coming generations to explore the field of visual arts by interpreting the Spring Theory of Science by enhancing the mental capacity to deal with soul of every materialistic body and to provide ease to live in this visible world happily.

The writer is an artist and practicing architect in Lahore – Pakistan who has vast study of behavior sciences, history, political & socioeconomic issues, science, art, religion and culture and he is conducting research on the issues of similar nature