“L et no one doubt that this is a difficult and dangerous effort on which we have set out. No one can foresee precisely what course it will take or what costs or casualties will be incurred. Many months of sacrifice and self-discipline lie ahead – months in which both our patience and our will will be tested, months in which many threats and denunciations will keep us aware of our dangers.” John F. Kennedy, the president of the United States, told his countrymen six days into the Cuban Missile crisis 1962.

Calamities, emergencies, and disasters where jolt the set socio-economic patterns of the states, give rise to a class of people who prove to be silver linings for the devastated and dejected communities. The English proverb, ”Cometh the hour, Cometh the Man”, verily illustrates that the right type of leaders steps to the fore during crises. Reminiscing from the past, the topic is indelibly linked to Winston Churchill’s leadership role during WW II, New York Mayor Rudy Giuliani’s handling of the post-9/11 situation and New Zealand Prime Minister Jacinda Ardern’s swift reaction to the Christchurch shootings in March 2019. ”The Hour” has now come again with the recent outbreak of COVID-19 that has engulfed almost all the countries of the world with over 3.1 million confirmed infections and nearly 218,000 deaths worldwide, according to the World Health Organization.

COVID-19 has traumatized the social, economic and political infrastructures of the world. Every country looks fighting this pandemic with its all available resources just to ensure the safety and wellbeing of its citizens

COVID-19 has traumatized the social, economic and political infrastructures of the world. Every country looks fighting this pandemic with its all available resources just to ensure the safety and wellbeing of its citizens. Though both men and material means are considered equally important to wrestle any such challenge what matters most is a capable, rational and buoyant leader to steer clear its nation of the imminent emergency. 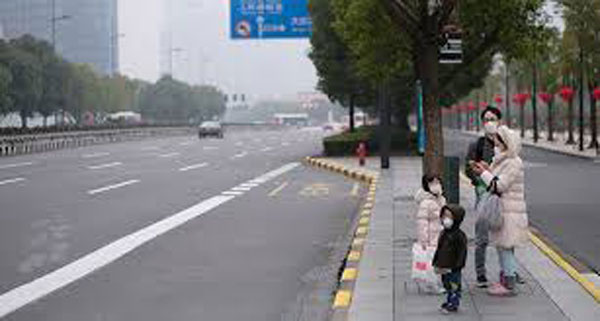 People who usually move ahead of tribulations are the ones who catch the eyes. They are the ones who have the vision to recognize approaching dangers and, ideally, put in place the necessary infrastructure and measures to quickly collect information once the crisis hits. Amid this ongoing worldwide emergency, South Korean President Moon Jae-in stands tall as he not only foreseen this disaster coming but has also made in place some tangible measures before it struck the border of this East Asian country. He rationally sensed the situation and so established a comprehensive mechanism of trace, test and treat – availability of the largest per capita testing kits, drive-through testing system, and an integrated nationwide response system – to deal with the virulent disease. Some Western leaders were, however, seen standing spectators showing indifference to this unprecedented public health emergency, ultimately failed the trust of their people.

As most of, even the ablest, governments from Europe to North America have been under extreme criticism for their incoherent and delayed response to the rapidly worsening COVID-19, Singapore, the otherwise dubbed an authoritarian regime due to its recent mishandling of anti-government protests, has been methodical in disclosing information about the infections. To have conflict-free communication, Prime Minister Lee Hsien Loong’s government regularly posts detail of each emerging case – down to person’s age, nationality, and the street where they live – on its national database. Since the outbreak of SARS (Severe Acute Respiratory Syndrome) in Singapore in 2003, the government has upgraded its medical infrastructure by establishing isolation wards and tracking system to trace the spread of infections.

Realistic and almost unemotional understanding of developing emergencies helps in surviving moments of great stress and strain. Now, every country is going for short term and extended lockdowns to contain the spread of the Corona Virus. In such circumstances, the right type of people will be the ones who will put themselves in the shoes of their downtrodden people and make and announce policies accordingly. Dwight Eisenhower once said: “The supreme quality of leadership is unquestionable integrity.” People always look for integrity and honesty if they want to follow someone. Without these attributes, neither the people can be persuaded nor can they be directed even in extreme conditions. Leaders must walk the talk to create hope among overcast masses.

Nondiscriminatory challenges are impossible to triumph over unless a general agreement against the threat is reached. During WW II, Prime Minister Churchill warded off self-righteousness, led an all-party coalition government and garnered the support of the whole of Britain to gallantly deal with the approaching threat of German invasion. He once even asked his predecessor Neville Chamberlain to ” mend the shop ” in his absence. Such all-Britain support steered Churchill to offer an outline of his bold plans for British resistance against the not-very-distant Nazis. He promised the world that the British people would “never surrender” and they never did. That daring stand of him would not have been possible in politically divided Britain. Similar national and inclusive efforts are needed for every country to fight COVID-19.

Leaders acknowledge the pain, give direction and raise the morale of the general public to help rebuild their dwindling spirit. In the time of crises, people lose self-confidence and show despair and dejection. Such dismal circumstances readily offer podiums to people like Jacinda Ardern, the Prime Minister of New Zealand. She showed deep compassion and absolute clarity on the Christchurch shootings. She immediately reached to New Zealanders and communicated every bit of the information she had. ”They are us” was her calling to the dead and the wounded and in that compassionate way she redefined the concept of leadership. Similar empathetic and all-encompassing global responses are the needs of ”the hour”.

If and when this global ordeal of COVID-19 subsides, ”the hour” will come again when economically and socially crestfallen people will look for ”the man” in their respective countries and regions. The world will surely be left with a huge vacuum giving chance to every ruler to show statesmanship, compassion, and commitment for the wellbeing of mankind. For the purpose, leaders will have to emerge out of the traditional power-hungry class of people where they will have to divert their energies solely in establishing a secure and humane world with the single focus on the provision of shared facilities – health, education, and climate.

The writer is a graduate in International Relations from Quaid-i-Azam University, Islamabad, and currently a postgraduate student in Political Science in Government College University, Lahore