The source of Muhammad Iqbal’s thought and poetry

* Muhammad Iqbal as a poet philosopher of Islam makes philosophy sing in his verses; the message of love, hope and dignity of man 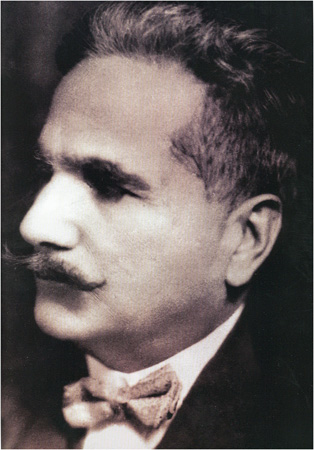 That poetry which is par excellence always comes out of that heart with seriousness and unrelenting conflict between the poet’s personality and his surrounding atmosphere.

A genuine poet, like a genuine teacher and leader, is one who can change the circumstances around as well as his society by changing their thinking and outlook through his poetry, philosophical writings and through his actions. Poetry without source and high thought make no poetry. For a poet, who is at the same time a philosopher, writer, thinker, lawyer, teacher, economist the problems of fulfilling the demands of art becomes all the more difficult to make the philosophy sign in an enormously arduous job. Allama Iqbal (RA) has succeeded in doing so in a beautiful form. Without a strong convection a poet can never conquer his milieu. In this sense Iqbal (RA) was a great conquer. When one goes through the pages what Iqbal (RA) has said we easily found that he had a purpose and a beautiful view of life before him. To live was to conquer. He makes others see and feel what he saw and felt.

Iqbal as a poet philosopher of Islam makes philosophy sing in his verses the message of love, hope and dignity of man. Both the poetic and philosophical source of inspiration for Iqbal (RA) was the Holy Quran and the teachings and noble life of the Holy Prophet Muhammad (SAW). Iqbal (RA) was of the firm belief that a man can only realize his inner potentialities and get success both here and hereafter only when he follows the commandments of Almighty Allah and the illustrious examples of the Holy Prophet (SAW) in letter and spirit.

The source of Iqbal s ideas and thought was the Glorious Holy Quran. This Holy Quran was revealed upon our Holy Prophet (SAW) by Almighty Allah as the book of guidance for the whole of the humanity. What some of the great scholars say about the source of Iqbals ideas and thought. Azaz Ahmad in his book he quotes about Iqbal that after having read all of Iqbals poetry, one feels obliged to read a lot around him (to understand him), for example Rumi, Nietzsche, Bergson, Al-jilli, Greek philosophy, Muslim philosophy, Ancient Hindu philosophy, Modern European philosophy, German, Latin and English poetry, Persian and urdu ghazal, and after having read all this when you come back to Iqbal one feels that he has yet to read and study a lot about Iqbal. Azaz Ahmad further says in his book that to understand Iqbal (RA) well one must also need to have knowledge of Arabic literature because the source of his philosophical thought comes from the Quran which is in Arabic language and claimed by Iqbal as:

If my jar is Persian, does not matter,

My wine is Arabian,

If my song is Indian, does not matter,

My melody is Arabian.

Dr. A.Schimmel pointedly remark that “nobody will assert that he was a prophet that would definitely be wrong both from the point of history of religions and its incompatible utility with the Islamic dogma of the finality of prophet hood but we may admit that he has been touched by the Gabriel’s wing”. A famous poet says about Iqbal that:

“He did the work of a Prophet, though one may not call him a prophet”.

Abu Ala Modudi (RA) said about Iqbal (RA) that whatever he thinks, he thinks it in the light of Quran, whatever he sees, he sees it from the eye of Quran. He goes to the extent of saying that we found that Iqbal is the leader of the Mufasreens of the past four hundred years. The reality and Quran was one/ same in the sight of Iqbal.

What I say was beyond the intellect of those western philosophers.

Allama Iqbal in one verse says that if I say anything which contradicts with the Holy Quran hold me accountable on the Day of Judgment.

Iqbal (RA) was also against as we see it in his poetry and speeches slavery, blind imitation, aimlessness both in thought and action, despondency, defeatism and faithfulness. He was a poet of hope and inspiration whose works still continue to illuminate the hearts of those who use intellect and insight.

In nutshell Allama Dr Sir Muhammad Iqbal (RA) was a great scholar of repute whose works were admired both in the east as well as in west. He had the profound knowledge of the oriental and occidental philosophies besides deep understanding of Holy Quran which he used to make people aware of their purpose of their lives. The source of his inspiration and foundation of philosophical thought was the Holy Quran and the traditions and Noble life of Holy Prophet (SAW). As Iqbal says that “Europe has given me the taste for innovation, my way of conduct is still that of the Quran and what it has ordered it in his verses. As Iqbal again says about Quran as it was its source of ideas:

“A hundred new worlds lie within its verses,

Whole centuries are involved in its movements”.

When Iqbal (RA) met Shah Sahseed he gave him the Holy Quran as gift and said;

In the court of that bounteous Muslim,

I have brought the gift of the Great Holy Quran.

NOTE – sources for this article were taken from many authentic books on the life of Allama Iqbal.

The writer is a scholar based in Srinagar and can be reached at mubashirkitaba@gmail.com