The choice between hunger and infectiona

A new wave of hunger is imminent as the virus age is shaping the novel contours of socio-economic fabrics. This will essentially impact all segments, sectors and slices of human existence for many epochs. This facade is going to be multiplied more exotically with pervasive poverty, structural injustice, maneuvering of religious dogmas and capitalization of economic gains in our region. However, this contagion may escort a swing from grasping behavior of society to more just balancing equivalence of the social order. But this fact is undeniable that it will hit poor much harder than the better off. Choices and chances play an important role in shaping the human destiny. Informed choices are the basic right of every citizen of a civilized country. In the pandemic times, the choice to take the chance is purely different; as taking a chance of disrupting lockdown, taking the chance of COVID-19 host and taking the chance of hunger might have had the same cost for the poor.

At the very twitch, different sects’ seminaries have been branded as the virus spreader and wave of blame hunt whitewashed the real quantum of looming danger. Although, Pakistan with unstable democratic and fragile economic fabric could not strategize any integrated blueprint for food, health and financial support infrastructure for this calamity but shockingly, the shutdown announced by the power corridors is with zero preparedness for 220 million people. In Pakistan, 40 percent of people live below 1$ daily income. This very segment lives under multidimensional poverty. They live on hunt-kill-eat model. There are not only the questions of cash crunch but they also endure shortage of basic needs like health, clean water and the most significantly food security. These factors are direct contributor towards availability and accessibility of food. The World Food Programme states that “43 percent of the country’s population remains food insecure, and out of that, 18 percent of people are facing an alarming dearth of food. Six people out of 10 in Pakistan are food insecure. Poverty is one of the primary drivers of hunger in Pakistan. Poverty, hunger and disease working in causation effect scenario corroborate more devastatingly for this time.

This time poverty, hunger, infection and death are working in “singularity in nature”

The most hard-hit strata in this tragedy is the poorest of the poor. As the country wide lockdown enters its second month, the poor people on the streets of metropolitan have started tossing up to hoard the ration for the upcoming rainy days. The large segment of the population survives at the edge of unprotected and unsure work, poor housing without clean water, pitiable sanitation and largely without assured public health care. 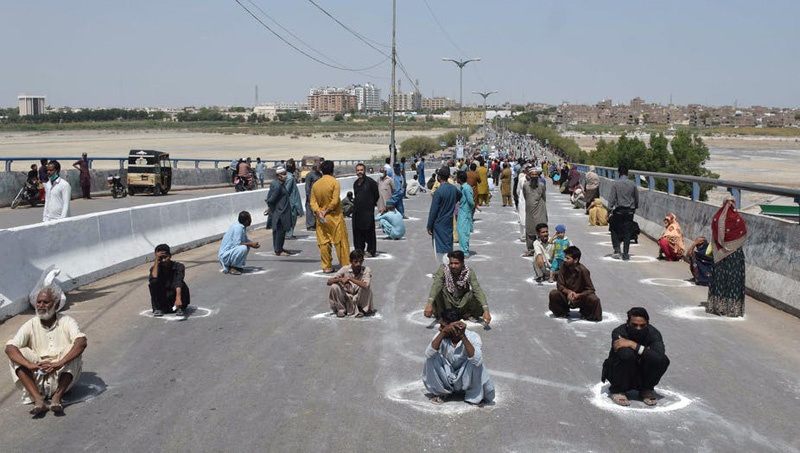 In slums, they commonly use many basic civic facilities which blow apart all clang claims and protocols of social distancing. The most vulnerable segments who live in slums shanties, homeless children and single immigrant workers are left with no choice except to bypass the health protocols, lawful practices and administrative procedures for this contagious spell. To keep roads empty, the feeblest has been cramped into quarters of slums without any alternative arrangement. So, the poor are left with binary choice, to die with hunger or to give a chance to infection. Thus, the minority affluent barricaded in the walled colonies would also be soon propped on the mercy of majority hunger stricken, super spreader and free raiders on the streets.

Social distancing is being sermonized across the state as the sole solution for pre-preemptive health strategy. Suddenly all business and social activities got suspended and people have been instructed to limit their movement. The top political leadership of the country conserved on giving the same dissertation for three weeks. The time must have had been used for well scribbled operational strategy for the local, regional and potential population under threat of the pandemic. The corresponding health care arrangement and food accessibility for the this very disadvantaged population is the high-pitched and mislaid link among planning architype of initial, middle and ultimately last stage of pandemic crisis.

Vertically and horizontally, thousands of people have been declared idle. The employers have shut themselves in gated societies leaving impoverished on the uninhabited roads. Karachi alone has thousands daily wage workers who sleep in parks or on open places without shelter. Thousands have commenced their journey of slow starvation in search of food, familiarity and family from Karachi to Khunjrab. This phenomenon will continue to increase as the lockdown syndrome spells more strength and so the trajectory of food accessibility for these sections will be on declining curve in coming days. Karachi Railway station, Torkham border, Cash distribution sockets by administration and ration distribution points by philanthropist have worked unerringly opposite of the lockdown myths.

State and society are collectively responsible for ostracized and disadvantaged fragments. Philanthropist activities in the country are discrete and out of public sector sponsored scaffold. Individual philanthropic activities or even government activities have risks of “mob mentality” wherein virus protocols are not only badly violated but proved counterproductive in terms of aid access. The lockdown needs to be supplemented with adequate food supply mechanism to deflect people to come on the streets. Recently, a woman in a stampede lost her life who tried to get cash under Ehsaas Relief Package in Multan. Another provincial government is under limelight for delivering underweight ration packs to families in goths. This is a state of high fretfulness for the societal behavior suffering through calamity settings.

Choices are hinges of destiny and choices made out of fear bring pangs along too. This time poverty, hunger, infection and death are working in “singularity in nature”. This time, the choice is very pure and decisive not only for the under privileged but is more crucial to the mightier side of equilibrium. This time, the choice and the chance of the poorest of the poor are going to determine the destiny of all. The choice of the weakest is evident, existent and exigent.