To say the least, the United States has had a complicated relationship with South Asia over the past two decades. As a student emerging in the field of American foreign policy in South Asia, I have begun to comb through the complex history of the region. In doing so, I have found an abundance of scholars and experts who have written passionately about US foreign policy towards South Asia. Two scholars I have intensely studied are Pakistani-Americans Akbar Ahmed and Shuja Nawaz. Mr. Nawaz, former head of the Atlantic Council’s South Asia Center, recently published his seminal book on US-Pakistan relations; The Battle for Pakistan: The Bitter US Friendship and a Tough Neighborhood. I chose to pair Nawaz’s book with The Thistle and the Drone written by my professor Akbar Ahmed at American University, as Professor Ahmed offers an alternative perspective of US foreign policy outside of Kabul and Islamabad. These two studies on US foreign policy in South Asia offer a complete breakdown of how decisions were made on the ground and provide a vision for where we may be moving towards in the region.

Shuja Nawaz is one the foremost experts on South Asia in Washington given his time at the Atlantic Council and his deep ties to the Pakistani military establishment. Throughout The Battle for Pakistan, Nawaz recounts the recent history of US-Pakistan relations, running through the Musharraf regime after 9/11 to the current civilian government of Imran Khan. Nawaz includes one element which is unique to The Battle of Pakistan, the inclusion of private conversations the author had with prime ministers, presidents, generals, ambassadors and diplomats. These conversations offer a window into the world of South Asian foreign policy. As a student with a passion for learning about South Asia, these quotes provide crucial context and insider knowledge on the region’s most decisive policymakers from the past two decades. This is an advantage of Nawaz’s book, as he finds somewhere himself between an American and Pakistani, between Islamabad and Washington DC.

The tug and pull of the US-Pakistan relationship is colorfully illustrated throughout the book. Nawaz accounts the high expectations that each nation had for each other throughout the post-9/11 era, which has been a source of failure between the two countries He addresses the influence of the Pakistani military, and how the military has hampered improved ties between the nations. This interference includes the army instructing Pakistani politicians to lie to American diplomats, the additional influence of Pakistan’s Inter-Services Intelligence, and the role of military coups in Pakistan’s politics. All of these factors which have hampered ties are examined, as Nawaz dives well below the surface. The US-Pakistan relationship is one of the most complex bilateral relationships, but to understand US foreign policy towards Pakistan and its limitless complexities, one should read The Battle for Pakistan.

While Nawaz’s book focuses on the capitals of Pakistan and the United States, the rural portions of South Asia are of equal, if not greater, importance. In America’s War on Terror, the United States was seeking out al-Qaeda and the Taliban, which largely resided in the tribal regions along the border areas of Afghanistan and Pakistan.  In Akbar Ahmed’s The Thistle and the Drone, Ahmed examines various Muslim tribes in the peripheral regions of Afghanistan and Pakistan. Switching the usual focus away from political capitals, Ahmed writes on the tribesmen who have been the focus of the War on Terror. In doing so, he offers an uncommon, but incredibly valuable, alternative perspective of South Asia, away from the halls of power, and towards the peripheral land of ancient tribal societies who have been the focus of a failed two trillion-dollar war.

When the United States invaded Afghanistan following 9/11, it did not fully comprehend the hierarchical and ancient tribal societies it was staring down. Akbar focuses on these “thistle-like” tribal societies which have developed strict codes of honor and revenge, something that remains completely alien to the Americans. At the center of this confrontation was the clash between the drone and the tribes. The drone, a futuristic, unmanned killing machine, came face to face with the ancient tribes of South Asia. One society had just landed a man on the moon while the other had successfully fought off the invasion of Genghis Khan, the Moghul Empire and the Soviet Union. To these tribesmen this American war was equivalent to an invasion. Akbar is correct in his assessment of America’s naivety of the tribal regions of South Asia, and that gap in knowledge continues in some part today. The US did not engage with local tribal leaders throughout its campaign in Afghanistan, deciding to primarily speak to those in Kabul. If we want to improve America’s foreign policy, we must look beyond the halls of Kabul and Islamabad. The seat of power, and America’s interests, exists just as much in the tribal regions along the Afghanistan-Pakistan border, as it does in the capitals.

These books expose the disconnect between our offices in Washington DC and the reality in South Asia. As an aspiring diplomat, I am hoping for a more effective, human based approach to US foreign policy. This would include understanding the people and societies the US may impact in a war, instead of seeing the people in that region as a political objective for American interests. We cannot enter nations with assumptions, rather we should learn and comprehend those nations so the US can make its time more effective and less violent. The past two decades of the American approach to South Asia are of great concern to me, as we have failed in our mission as Americans. For me, I grew up always surrounded by my South Asian friends and culture, which has forged my view of the region and my personal connection to it. I am deeply concerned about the reputation the United States has left itself in the region, as I aspire to one day work in the field of South Asia foreign policy.

The United States approached the post-9/11 situation with a heavy hand, entering the region largely unaware of its thousands of years of rich history. The United States expected South Asia to function like the West, only to find a highly tribal and decentralized society, which has been the source of thousands of American and Afghan lives lost. Moving forward I hope that the United States will focus on education, human connection, and diplomacy in South Asia rather than weapons and war. The United States should create a localized effort to work alongside local players and organizations to peacefully fulfill their interests in the region, as not all problems should be solved with guns. Both scholars offer an excellent look into past failings in Afghanistan and Pakistan and the US should build off those mistakes to better its future foreign policy. 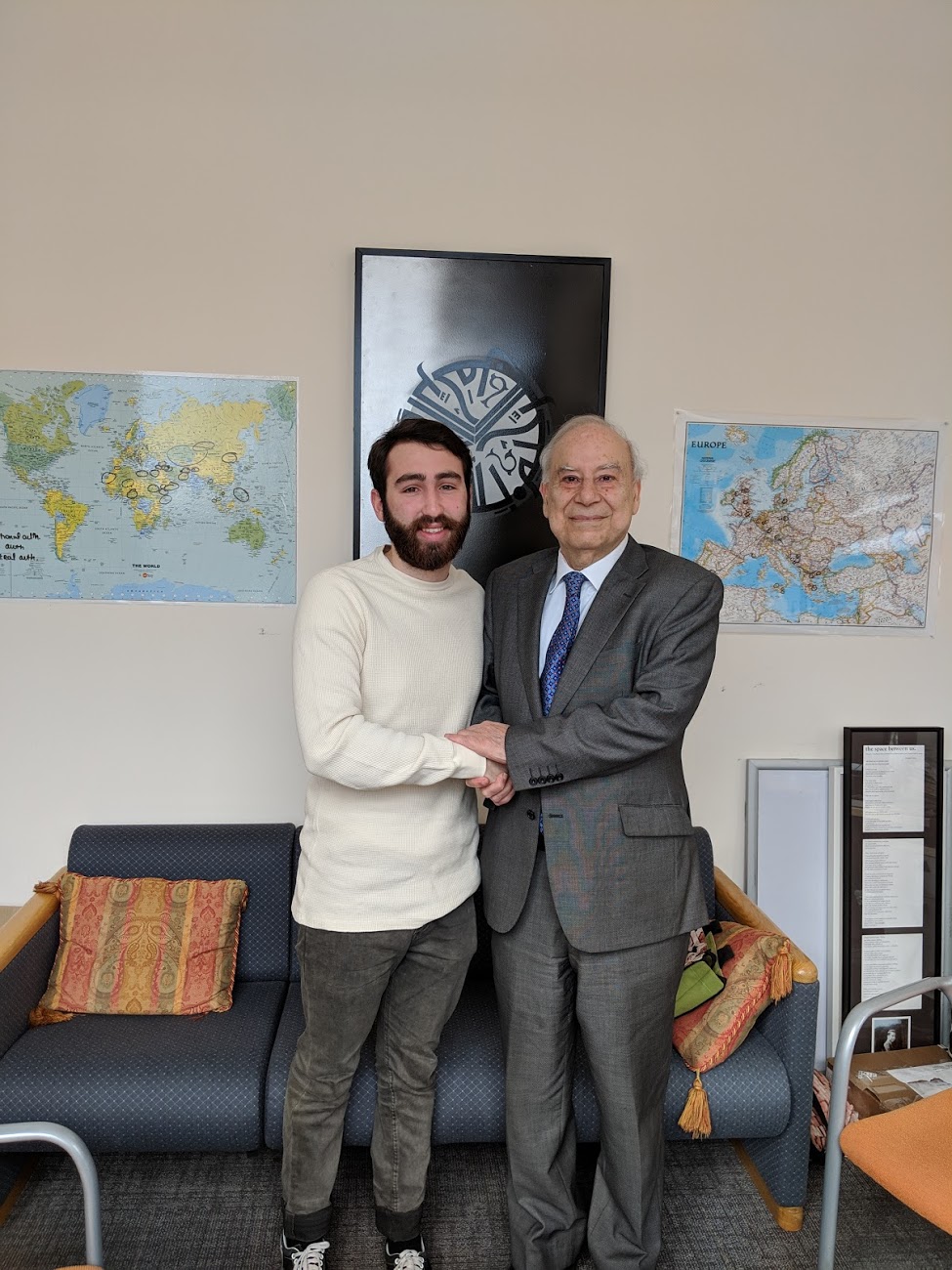 Will Shriver with Ambassador Akbar Ahmed. 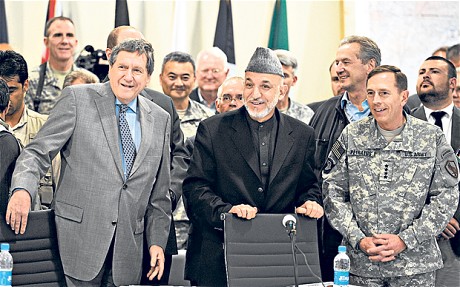 Ambassador Richard Holbrooke, one of the leading 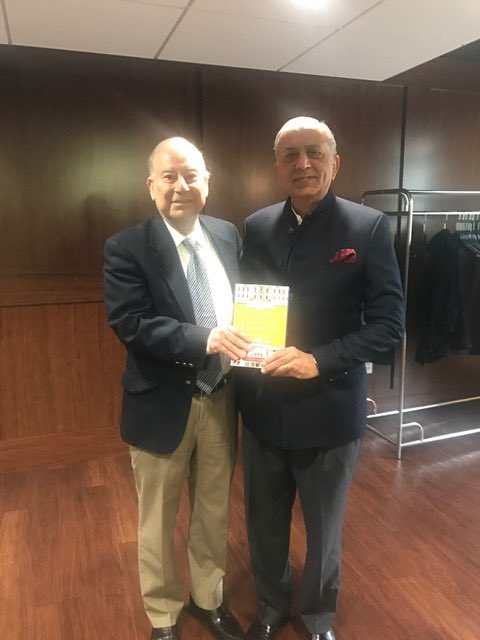 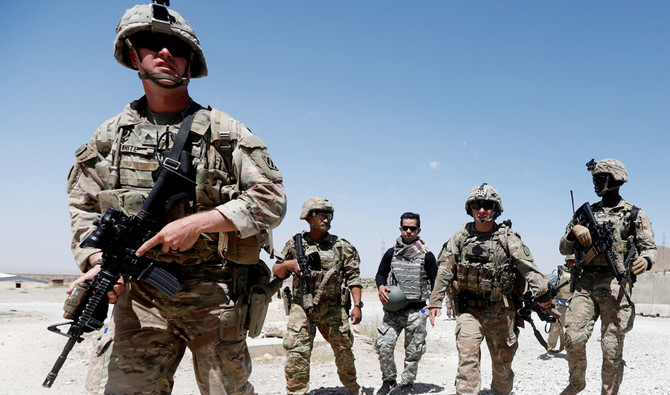 US troops in Pakistan.

William Shriver is a former intern with the Bureau of South and Central Asia at the U.S. Department of State, The Woodrow Wilson Center, Hudson Institute, and Asia Society Policy Institute. He is also a recent graduate of the School of International Service at American University, focusing on South Asia. He can be reached at: shriverwilliam@gmail.com