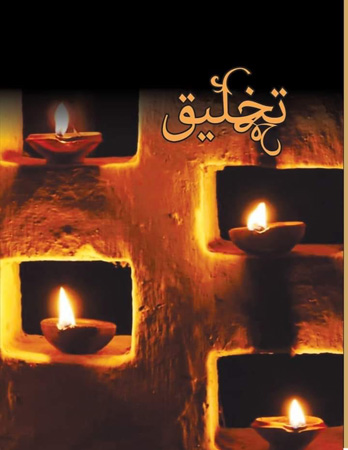 Still in affordable price and in reasonable size, monthly ‘Takhleeq’ provides interesting material for the literature lovers by its editor Soonan Azhar Javed.

March 2020 edition of Takhleeq’s special edition reserves a separate corner for Bushra Rehman. Soonan and Dr. Haroonur Rasheed Tabassum have paid tributes to Bushra Rehman, the latter names her ‘Bulbul-e-Pakistan’. He acknowledges her as a poet, writer, philosopher and column writer. Bushra is a fine orator who captivates her audience by supplementing her topic of speech with mysticism and Sufism. In a very exhaustive essay ‘Dil Ko Barbaad Kar Kei Dekh Liya’, Hassan Askari Kazmi pays tribute to Azhar Javed, the editor of Takhleeq who had reserved his life till his demise on February 14, 2012 for publishing this magazine for four decades continuously. Ghalib’s couplet is appropriate here that says ‘Go Haath Ko Jumbish Nahi Aankhon Main Tau Dum Hei/Rehne Do Abhi Saghar-o-Meena Mere Aage’ (though my hands are lifeless, at least my eyes can see the wine in front of me). His son Soonan came to his rescue and continued his father’s legacy. Aslam Kamal remembers his frankness with ‘Darwesh Sifat’ Azhar Javed in the backdrop of literary activities at its peak in 1960s. He recalls that on the footpath in front of Standard Chartered Bank where about fifty poets and writers sat in a get-together presided by Ahmad Nadeem Qasmi. Azhar Javed came and took off his Shawl from his shoulders and spread it on the floor for the guests Jamil Yousuf and Editor Nairang-e-Kheyal Sultan Rashk from Rawalpindi. This gesture became talk of the town and the literati started giving lot of respect to Azhar Javed and started suggesting the name of Bhagwan Street, where his office was located as Azhar Javed Street or ‘Kucha-e-Gaisoo Daraz’ (longhair street) as Azhar used to keep his hair long. Azhar never left Purani (old) Anarkali despite changing his office a few times. It is the same area which was famous for Anwar Kamal Pasha who produced the film Anarkali. He asked Zarif to play the role of Jehangir’s (Sudhir) friend in the film. When Zarif asked Pasha as to who played the role of Anarkali, Pasha told him it was Nurjehan. Zarif who was famous for his humour, automatically said then it should be named as ‘Purani’ (old) Anarkali. Naseem-e-Sehar and Muhammad Rafiq Khan also pay tribute to late Azhar Javed. Finally in this corner, Azhar Javed’s short story ‘Purani Cheez’ (old thing) has been analyzed by Jamil Ahmad Adeel. Najma Shaheen shares her memories of Azhar Javed.

I am more familiar with the name, poetry and music of Ameer Khusrou because of various singers singing his songs from time to time at PTV, for private CDs and at performances on Stage etc. Some of the most popular songs are ‘Chaap Tilak Sab Cheeni’, ‘Zihaal-e-Miskeen’, ‘Mun Kunto Maula’, ‘Nami Danam’ and ‘Sakal Ban Phool Raji Sarson’ etc. Khusrau was self-trained musician and creation of one of the most intricate musical instrument ‘Sitar’ is attributed to him. He also cut Mardang and created Tabla

Essays section comprises writings of Younis Ijaz, Muslim Shameem, Khalid Abdullah and Kamran Rafiq. Muslim Shameem terms Abid Hassan Manto as ‘Jehan-e-Fikr-o-Danish’ (a world of thinkers and wisdom) – Page 57. In Manto’s first book ‘Nuqta-e-Nazar’ (point of view), Syed Sibt-e-Hassan writes in the prologue that Manto was supporter of Progressive Writers Movement. This movement had all the ingredients to survive as it kept in touch with the changing environments in all times. An essay of great interest is on Ameer Khusrau by Khalid Abdullah Venice.

I am more familiar with the name, poetry and music of Ameer Khusrou because of various singers singing his songs from time to time at PTV, for private CDs and at performances on Stage etc. Some of the most popular songs are ‘Chaap Tilak Sab Cheeni’, ‘Zihaal-e-Miskeen’, ‘Mun Kunto Maula’, ‘Nami Danam’ and ‘Sakal Ban Phool Raji Sarson’ etc. Khusrau was self-trained musician and creation of one of the most intricate musical instrument ‘Sitar’ is attributed to him. He also cut Mardang and created Tabla. Surprisingly more people seem to own him among present generation in Pakistan rather than in India. He hailed from Turk Lacheen tribe. His father Saif uddin had migrated to India. Since he was a literate person, he had access to the court of Shamuddin Altamash. This access provided a base for Ameer Khusau to make his contributions. He was a poet, musician, historian and a soldier at the same time. He said poetry in many languages. His poetry in Persian language became a portion of history. Sultan Ghiasuddin Balban gave him title of ‘Tooti-e-Hind’ (Voice of India). Iqbal and Ghilab have acknowledged Khusrau’s contributions. Ghalib says ‘Ghalib Mere Kalam Main Kyun Kar Maza Na Ho/Peeta Hun Dho Kei Khusrou-e-Shirin-Sukhan Kei Paano’ (how is it possible that my poetry is not sweet as I wash Khusrau’s feet and drink it).

Short Stories corner is the lengthiest in Takhleeq’s March 2020 issue. Contributors are Dr. Rasheed Amjad, Attiya Syed, Agha Gul, Salma Awan, Mussarat Kalanchavi, Asim Bukhari, Agha Shahid and Navin Roma; a collage of young and old. Rasheed Amjad is a popular senior writer from Photohaar area and received Pride of Performance in 2006 for his socio-political stories with philosophical touch. His short story ‘Halloween’ is a depiction of our youngsters who land up abroad in search of green pastures. Mostly the reality is bitter. Halloween is a myth of western culture when from dusk to midnight people collect chocolates and distribute to children that witches who descend the earth shall go away. People draw ugly faces on pumpkins, li them and exhibit them in their lawns. The narrator is in love with Sajal in a village but she has better matches of the rich landlord families. He slips and joins a group of friends who head to the West. He gets a job in a factory and stay in a room shared by the other two friends David and Brown. On Eid day he misses the celebrations back home. David tries to please him by buying him a burger. Then on Halloween night Brown is missing. When he returns he has a basket full of chocolates. He sits on the doorsill and does not enter the house. It starts raining. He still waits there alone. When asked David explains that Brown’s girlfriend had left him on one Halloween night and he believed that the witches shall return her if he treats them to chocolates. Like the previous year, she does not return. That night the narrator missed Sajal a lot!

This reviewer’s installment on Nurjehan pertains to her career as a playback singer. Her repertoire with Composers A. Hameed, Akhtar Hussain. Feroze Nizami, Baba Chishti and Khalil Ahmad have been discussed. Regarding Nurjehan – Chishti combination this reviewer wrote ‘After composing songs in India, G. A, Chishti, popularly known as Baba Chishti went on to compose music for one hundred and fifty two movies in Pakistan, mostly Punjabi songs. Exception was his Urdu movie ‘Lakht-e-Jiger’ which was a musical hit. A lullaby ‘Chanda Ki Nagri Sei Aa Ja’ became an instant hit sung by Nurjehan. This movie was produced by G. A. Gul and directed by Luqman. Lyrics were shared by Mushir Kazmi and Nazim Panipati. Another popular song by Nurjehan was ‘Aa Haal Dekh Lei Mera’. Its music was given by Rehman Verma but Baba Ji’s famous song ‘Woh Khwaab Suhana Toot Gaya’ by Madam, remains alive today. The other three songs by Madam are ‘Aaj Hum Beaasron Ka’, ‘Aahen Tarap Rahi Hai’ and ‘Chanda Re Chanda’ and ‘Rakh Sada Anjaan Par’ a duet by Nurjehan and Salim Raza. Baba Ji was lyricist too. One of the famous songs written by Baba Chishti for music composer Master Abdullah in the movie ‘Jatt Mirza’ titled ‘Sajna Raah Tera Tak Tak Haarian’ was beautifully pictured on Anjuman.

The other notable songs by Baba Chishti for Nurjehan are

Rest of the contributions comprise interview of Azra Asghar, Ghazals by seniors and juniors, autobiography ‘Kala Pani’ by Maulana Muhammad Jaffer Thanesari, Memories of Riaz Siddiqui by Arif Shafiq, profile of Muhammad Rashid Lahori by this reviewer. Newspaper cuttings and Muhammad Tariq Ali’s reviews with letters to the editor add flavor to the already rich contents of this magazine!