Nicola Ferguson Sturgeon born 19 July 1970 is a Scottish politician who has been serving as the fifth First Minister of Scotland and leader of the Scottish National Party (SNP) since November 2014. She is the first woman to hold either position. Sturgeon has been a member of the Scottish Parliament since 1999, first as an additional member for the Glasgow electoral region from 1999 to 2007 and as the member for Glasgow Southside since 2007 known as Glasgow Govan from 2007 to 2011. Sturgeon has campaigned against replacing the Trident nuclear weapons system. She has been a critic of austerity, saying that the UK government’s austerity economics is morally unjustifiable and economically unsustainable.

Sturgeon has also campaigned on women’s rights and gender equality. She is a self-described feminist. She argues that Scotland’s feminist movement is not simply symbolic, but sends a powerful signal about equality. She hails Scottish feminist economist Ailsa McKay as one of her inspirations. During the April 2019 SNP Conference held in Edinburgh, Sturgeon declared a climate emergency. She argued that Scotland’s carbon dioxide emissions are irrevocably causing sea levels to rise, which could have a negative impact on Scotland’s prospects of achieving Independence.

Time and Sturgeon’s democratic politics will prove the course

Scotland is seeking independence in a legal and legitimate referendum, which can be recognised internationally. Nicola Sturgeon’s government will seek an agreement with the UK government on the process for a referendum, and make the case for independence so strong that no prime minister, not even Boris Johnson can refuse it. The Scottish government has already taken steps, by testing the potential question to be put to voters with the electoral commission, calling a new constitutional convention to broaden the support, and publishing policy papers on how to set up an independent Scotland. Scottish leadership is taking steps, in Scotland, the steps required to ensure that a referendum can be held that is legal and legitimate so that the result be accepted and agreed internationally.

The Scottish leadership will have to agree on a process with the UK government on a referendum in line with a clear mandate from the people. At the UK general election in December, Sturgeon’s Scottish National Party won 80 percent of the seats in Scotland on an anti-Brexit and pro-independence platform. She argues that Scots, who overwhelmingly voted to remain in the European Union in the 2016 referendum, should not be taken out of the bloc against their will, and that polls suggest pro-independence sentiment is on the rise. On 24 September 2014, Sturgeon officially launched her campaign bid to succeed Salmond as Leader of the Scottish National Party at the November leadership election. It quickly became apparent that no other candidate would be able to receive enough required nominations to run a credible leadership campaign. During the speech launching her campaign, Sturgeon announced that she would resign as Depute Leader, triggering a concurrent depute leadership election. MSPs Angela Constance, and Keith Brown and MP Stewart Hosie all nominated themselves to succeed Sturgeon as Depute Leader. Nominations for the SNP leadership closed on 15 October, with Sturgeon confirmed as the only candidate. On this date, Sturgeon also came out on top in a trust rating opinion poll, conducted for the SNP, which indicated that 54% of the Scottish population trusted her to stand up for Scotland’s interests. 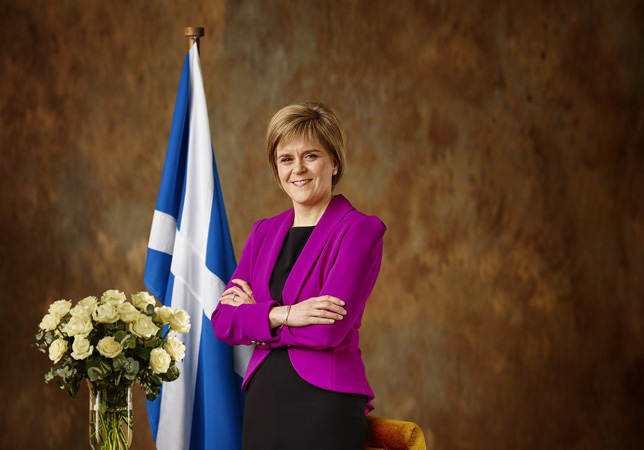 Sturgeon was formally acclaimed as the first female Leader of the SNP on 14 November 2014 at the Autumn Conference in Perth, with Hosie as her depute. This also effectively made her First Minister in waiting, given the SNP’s absolute majority in the Scottish Parliament. In her first speech as leader, Sturgeon said that it was the privilege of her life to lead the party she joined as a teenager.

Scotland had held an independence referendum in 2014, when people voted 55 percent to 45 percent to remain part of the UK, and British Prime Minister Boris Johnson has so far rejected allowing a new vote.

But Sturgeon argues that Brexit changes the context. The UK is not an imposed state. It is a voluntary union of nations. Sturgeon did not rule out the possibility of Scotland holding a referendum without British approval, an issue that has to be tested by the courts, but she said her preferred way is building momentum for independence. She is a democrat and in order to legitimately become independent, she will have to prove that it is the will of the people. Will Scotland unilaterally declare independence? Time and Sturgeon’s democratic politics will prove the course.

The Spanish region of Catalonia unilaterally declared independence in October 2017 following a referendum deemed illegal by courts, prompting Spain’s biggest political crisis in decades. This is a route Sturgeon wants to avoid and an independent Scotland would seek to re-join the European Union. Sturgeon earlier wanted to see a referendum this year of 2020, but that is unlikely to happen. Sturgeon could be looking at the Scottish parliament elections in 2021, targeting a big win on the back of a referendum campaign. The latest opinion polls showed that support for independence has risen to 51 percent. ‘Divergence too heavy a cost’ but until then, Scotland will try to convince London of the importance on establishing a close trading relationship in the talks on future relations, despite Sturgeon being not very optimistic about success. She believes that her government, where it can, will try to stay close to the EU regulations, which would make it easier to re-join once independent. She also believes that the right to diverge will come at a very heavy cost, a cost that is too heavy. The European Union has said that the UK will need to align itself with EU rules and standards if its goods want to have easy access to the bloc’s single market. The European Union wants to prevent UK from undercutting EU businesses. The UK has said, however, that it wants to diverge. There is a danger that the UK will significantly reduce Scottish access to the single market because it wants lower standards on health, environment and worker’s rights. Now Scotland minds the gap.

The writer is book ambassador, columnist, political analyst and author of several books based in London. He can be reached at naveedamankhan@hotmail.com