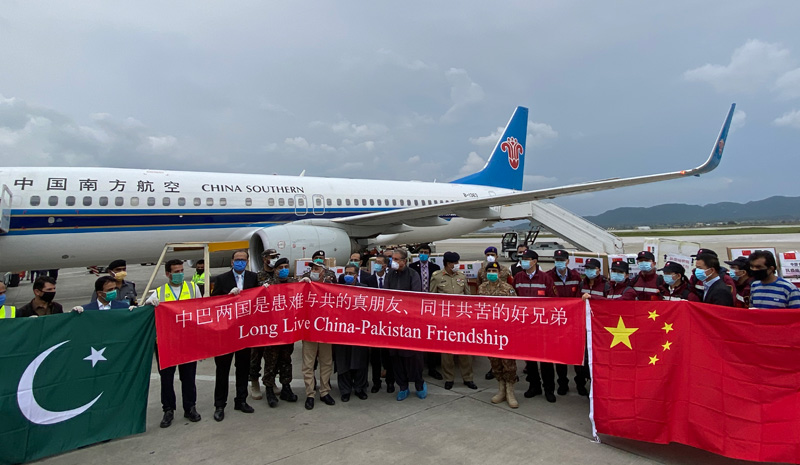 A special Chinese flight carrying an eight-member team of medical experts and relief assistance landed Saturday at Islamabad International Airport to support Pakistan, in an effort by the brotherly country to fight coronavirus pandemic.

The team of medical experts will assist the local doctors and health experts in battling the coronavirus. The team will stay in Pakistan for two weeks. The Pakistan-China all-weather strategic cooperative partnership has acquired greater strength and depth in recent years, guided by the shared vision of Prime Minister Imran Khan and President Xi Jinping.

President Dr Arif Alvi, accompanied by Foreign Minister Qureshi and Minister for Planning and Development Asad Umar, visited Beijing on March 16-17 this year to express Pakistan’s abiding support and solidarity with China in its fight against Coronavirus. Pakistan and China continue to collaborate closely and coordinate relief assistance to counter the formidable challenges posed by COVID-19.

Talking to media persons at the airport, Foreign Minister Shah Mahmood Qureshi thanked the Chinese leadership for sending the medical team to share their experiences with Pakistani counterparts to fight the pandemic. “Chinese have once again shown to the world that they are friends of Pakistan. They care for us. We stand with each other in difficult times. This is a unique relationship and such testing times tell us how close we are to each other,” he remarked.

The foreign minister said the government’s first priority was to protect medical workers who were in the first line of duty for what the supplies had arrived and would be distributed soon. He said the government was trying to double the number of the ventilators and the testing capacity which would be remarkably enhanced after the arrival of a walk-through testing facility. Regarding the return of the stranded Pakistanis abroad, the foreign minister said the arrangements are being made to receive them at the airport.

Later, he also inspected the arrangements at the airport where he was also briefed by the health officials about the protocols to be followed on the arrival of the Pakistanis from abroad.

A considerable amount of donations from private sources from China has also arrived in Pakistan in recent days. Alibaba Foundation and Jack Ma Foundation have donated 50,000 test kits and 500,000 face masks.

A day earlier, China handed over two tons of masks, test kits, ventilators, medical protective clothes through Khunjerab. The consignment of medical supplies contained two tons of medical equipment to help Islamabad fight coronavirus pandemic. The supplies arrived at Pakistan-China border at Khunjerab Pass and included face masks, testing kits, ventilators and protective clothes. The consignment was handed over to Pakistani authorities at Khunjerab Pass from where an army helicopter further transported those.

“At least 2 tonnes of masks, test kits, ventilators, medical protective clothes worth Rs 67 million were handed over [to Pakistani officials] at Khunjerab Pass,” according to a statement by Chinese Embassy in Pakistan. “This is the friendship higher than mountains!” the embassy tweeted.A spokesperson of the Chinese Embassy in Islamabad had told Global Times on Friday that Pakistan is facing a severe challenge in the shape of COVID-19 outbreak. “This batch of assistance from China is urgently needed by Pakistan. The Xinjiang regional government took the responsibility of purchasing and transferring. China and Pakistan made the decision within three days to temporarily open the Khunjerab Pass and send two tons of medical supplies to Pakistan,” the spokesperson said. The Kashi government quickly accomplished the preparation work on the Chinese side, including customs clearance, cleaning the roads and coordination work, which ensured the smooth transfer of medical supplies, the spokesperson said.