A Mullah Sahib in San Jose

The beauty of California, other than its rugged mountains and bays, is its cultural diversity. A diversity where you are under the same sky as people from all over the world. In San Jose the other day, just as in Lahore, the Women’s International Day was celebrated with walks, slogans, speeches, and ceremonies, with pledges by one and all, across genders, to stand up for human equality. Both men and women took part in these ceremonies. 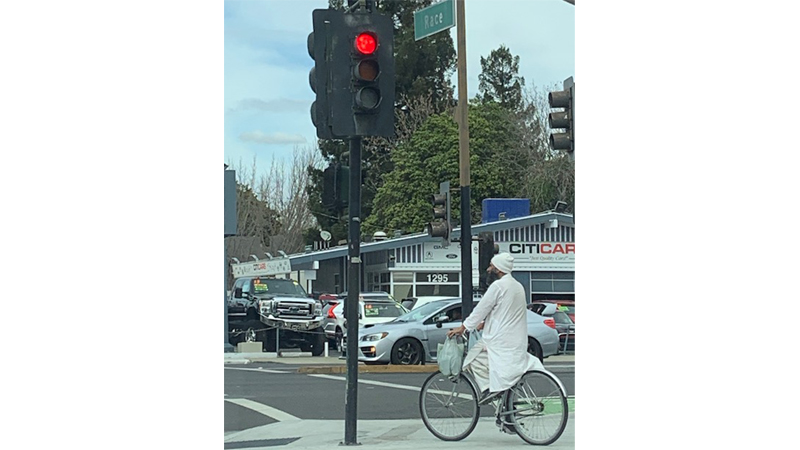 Today in San Jose as I drove around running errands, I saw a gentleman on a bicycle wearing traditional white shalwar kameez, with a full Mullah beard and cap. We were parked at the same red light, he was waiting for the cross walk pedestrian light to turn green. He knew all the rules. He pressed the cross walk pedestrian button to indicate to traffic that he needed to cross on his bicycle. The cars acknowledged his signal as the lights started flashing yellow to indicate that someone on a bike or on foot had pressed the button to wait his turn to cross the busy intersection. In those few minutes of waiting, I thought how poignant it was that I, a woman from Lahore, was waiting alongside a San Jose intersection of California, with a Pakistani looking Mullah sahib, riding a bike. We were both waiting our turns to proceed until the light turned green. It is then that the thought occurred to me how well behaved, clean, and law abiding this gentleman was. He was following all traffic rules. Did not rush his turn or try to cross the road, but waited for the green signal. He did not stare at anyone or give the women walking around in shorts or jeans any begrudging or harassing looks. He did not pelt stones or make remarks. The same Maulvi in California, acting like a seasoned, thorough gentleman. Why, I thought to myself, can we not make the Lahori Mullahs who pelted stones, behave like gentleman?

It occurred to me how I live in a city in America with different ethnic and religious groups. In 2017 USA had an estimated 3.45 million Muslims of all ages. By 2050, Pew researchers estimate Islam will supplant Judaism as the second-most popular religion in the US with 8.1 million Muslims.

Why then, in a country I call home, where the majority are Allah’s children, are women like me not allowed to march for human rights without being pelted stones by factions of those who consider themselves higher beholders of a rhetoric Islamic ideology, which is anything but? Where in Islam does it claim that a group of women marching in peace and asking for equal rights, deserve to be punished, desecrated, beaten and injured?

If a Maulvi sahib can ride his bike without being harassed or being allowed to harass, why can’t we at home in Pakistan, enforce the rule of civil law? A rule of law that would not give the Mullahs the sense of entitlement to throw stones, and tantrums in public, against women who oppose a draconian ideology which sees women as subservient to men?

When will our nation learn that those countries who have progressed in terms of education and industry, are countries where women enjoy the same rights as men? When will Pakistan as a nation come to terms with cotemporary economic and civilian parameters of growth, in which there is little or no room for rhetoric of women being ‘controlled’ by men?

In the recent political global climate, more and more women have taken over as heads of states in Europe and Asia, begging the question, why in Pakistan, a group of women can’t be allowed to hold a simple congregation without being pelted stones by factions of those perpetuating a fourteenth century mentality?

Above all, who gives a faction of such bellowing factions the right to disturb law and order? What then distinguishes civilised societies from barbaric ones? Is the rule of law and the ability of civilian government to control those who break it? The Maulvi sahib who was my fellow rider this morning on the streets of San Jose behaved like any other citizen, waiting his turn at the intersection before he could cross over.

If an American Mullah can be a Mullah with equal rights and go about his business, why can’t Pakistan train its civilians to follow the law? The rule of law must supersede ideological demagogy in order for society to retain control of its citizenship. Religion cannot and should not be used as a tool to subvert the rule of the constitution, nor should it allow those with a certain belief system a sense of entitlement that they are above the law.

I hope in Naya Pakistan, we can begin the much needed process of taming the shrew of those Mullahs who think that in the year 2020, it is defensible to pelt those who don’t agree with them, with stones. Or is Pakistan doomed to live in the Stone Age for some time to come?