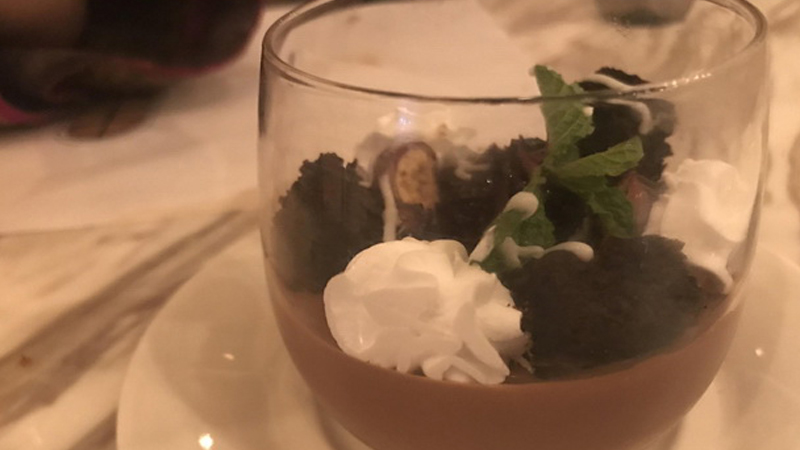 One of the first things entering Jardin restaurant is seeing one of the chefs with black gloves carrying a knife almost the size of a Samurai blade moving about in a hurried purposeful walk.

It could pique your curiosity or make you run for the exit, depending on your risk appetite.

Jardin’s core offering is mostly French and Italian food with some menu items from other cuisines. But it’s still what mostly you could qualify as ‘continental’.

But can Jardin tucked away in an unassuming corner of Bukhari Commercial DHA really hold its own against permanent fine dining fixtures like Cafe Flo for French cuisine and Pompeii for Italian cuisine. It’s a tall order but let’s dig in.

I was served the customary bread basket with butter and balsamic vinegar. So far so good. Next for starters came the beef Bruschetta accompanied by a few condiments. The cherry tomatoes on top of it lent a tarty acidic taste to the starter.

Which set the stage for the main courses; the Chicken La Mexicana, a chicken fillet doused in a spicy creamy sauce. Which left room for the main event and something truly novel on the Karachi foodmap, it’s called the Le Rare Steak which is basically a lean cut of the tenderloin sliced when the long knife wielding Maitre D appears and slices the meat for you. And there some more culinary theatre after that, when those slices are placed on really hot slabs of lack stone where the sizzling starts. The sound the smell of the slices and emission of smoke really makes for a great spectacle. I asked for the medium rare treatment, it was garnished in salt and pepper in a manner reminiscent of the famous Salt Bae. Visuals and theatrics aside the taste matched the buildup to it. Definitely the star of the show and a nod to Jardin for an experience out of the ordinary.

All of the content were washed down from a strawberry margarita from the fresh produce of the season instead of an artificial essence. 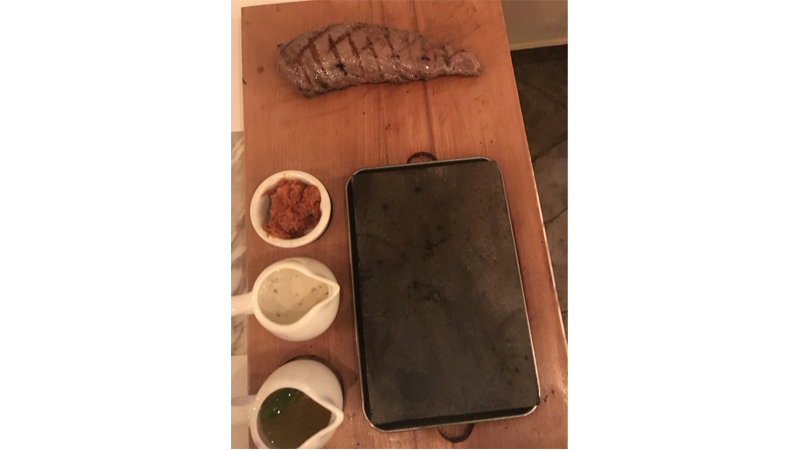 To end things, I ordered the Mocha Cremeux Pot which had a strong authentic punch to it. That same robust, earthy taste of freshly ground coffee beans and just the right balance of sugar. It was an unexpected and pleasant surprise.

Jardin is doing a lot of things right and there and there is a lot of heart put in the operation. But it’s competing with permanent fixtures of the fine dining scene such as Cafe Flo and Pompeii and their offshoots catering to a younger audience such as Xanders and POMO. Instead of doing what is tried and tested which it does resonantly well, it could certainly up the game when it comes more innovation and risk taking and making a distinct identity for itself. The steak cuts on the stone slabs and a great tasting coffee dessert is a good start. It would however benefit from rethinking many other menu items that frankly are available in many run of the mill Restaurants.

Having said that it’s a difficult balance, customers are fickle and may even stay away if they see a lot of experimentation. Perhaps a limited menu or tastings could be a better way to get that experimentation going. So as for the verdict, it has decent offerings and the sizzling steak is a delight it would certainly make a bigger impact if it makes bolder bets on menu items that are truly unique, something it can really call its own.