Why people are going nuts over the Oculus Quest 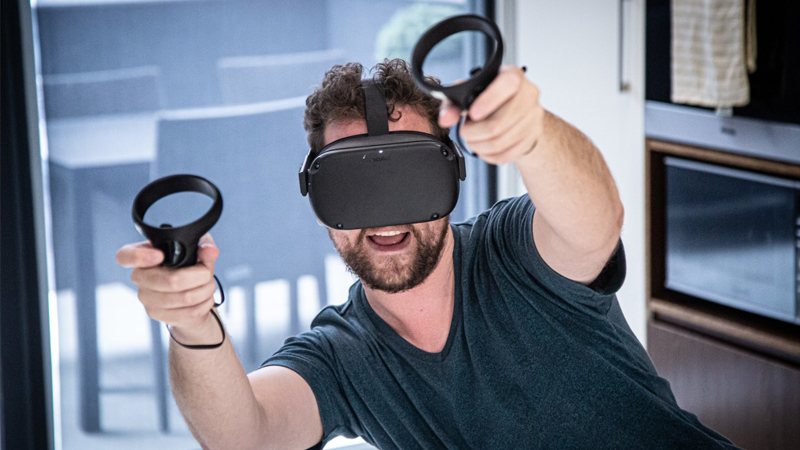 I find it amazing just how many people haven’t yet had their first taste of virtual reality – but I understand why. It’s expensive, the headsets are bulky and weird, it looks pretty antisocial, and it’s the kind of thing you need to be a bit of a nerd to work your way into, what with all the wiring, and room sensor setups, and high-end water-cooled gaming PCs.

That’s why I consider the Oculus Quest to be the most important thing that’s happened in the short history of consumer VR. It removes every barrier to entry. Totally wireless and requiring no external computer, you can throw it in a backpack, break it out at a party and have your friends exploring their first virtual worlds within literally two or three minutes.

This is like that moment when DJI took the do-it-yourself world of hobby quadcopters and wrapped it up into a solid, reliable product anyone could enjoy, with a simple, beautiful interface anyone could immediately enjoy. The Oculus Quest brings VR out of the lofty realms of nerd-dom and makes it something you can blow your grandma’s mind with.

Part of what makes this thing so special is how much Oculus has crammed into this little headset and its two hand controllers. Everything is built in, from the computer, to the WiFi connection, to the tracking system in a totally standalone package. You don’t need to put tracking sensors around the room; Quest manages to track you beautifully using just four cameras on its corners.

Switch it on in a room you’ve never played in before, and the Quest shows you the real world in black and white, asking you to draw out the safe area you’ve got to play in using your hand controller as a pointer. Once you’ve confirmed your play area, the real world disappears. You’re transported to a gorgeous, domed luxury chalet somewhere in the hills. It’s dusk, there’s a fire crackling in the stove, and you can see the lights on in other similar domes stretching out under the beauty of the Northern lights below the night sky, as far as the eye can see.

It is stunning how quickly your brain accepts a new, virtual, reality when your sensory inputs are hijacked by a device like this. You’re there, in this non-existent place, completely immersed, almost immediately. This place is beautiful, magical, calming. And all it is, is the Quest’s home screen, rendered in a not-very-impressive-sounding 1,600 x 1440 pixels per eye.

If sensor-free tracking and totally untethered operation are two of the Quest’s greatest magic tricks, a close third has to be the way that it works as you approach the borders of the safe zone you’ve marked out. As you walk around in the virtual world, the Quest will show you the edges of your safe zone as neon grid walls, and only if you’re getting close to them. Walk through the wall, and the Quest fades you back into its black-and-white version of the real world so you can see what’s going on without taking your headset off. A magnificent touch.

Your two hand controllers become magic wands you can use to bring up various menus, which appear as giant floating screens in the room before you, and from this point the Quest becomes as familiar as a smartphone to use. There’s an app store to download games and experiences from, or you can simply surf the web in virtual space, or jump on YouTube. If the content’s not 3DVR friendly, it simply shows on a big screen in front of you. If it is, then you’re transported again to another place and time to watch things unfold around you.

If you’ve got a streaming video attachment on your TV like a Chromecast or similar, you can set the Quest to show whatever it is you’re looking at on the TV in the real world, letting others see what you’re seeing and turning the Quest into a much more social experience.

And it is a social experience, especially in a group where you’ve got people who’ve never tried VR before. It’s an endless delight to me watching the awe and wonder on people’s faces as they travel through a landscape built from a Dali painting, or gaze upon the vastness of the Earth as they step outside a space station. You can watch these videos on YouTube on your phone and wonder what’s the big deal. Believe me, it is a big deal when you’re there in virtual reality and not peering at a screen.

Then there’s the games. One of the sacrifices Oculus has had to make to wrap the Quest up into an all-in-one package is its graphics processing, which, understandably, can’t compete with a standalone PC with huge amounts of memory and expensive graphics cards – although mind you, if you’ve got one of those, you can hook the Quest up to it with a cable and crank it for all it’s worth, giving you access to the latest and greatest. The upcoming Half Life: Alyx, for example – which I suspect might become the first truly unmissable VR gaming title – won’t run natively on the Quest, but will play fine through a cable connection to a good enough PC.

Much of the native game content on the Quest relies on reasonably simple graphics, and I’m here to tell you it doesn’t matter one bit. Just like we’ve discovered with warehouse-scale multiplayer VR experiences we’ve had in the past, VR’s immersive capabilities seem almost resolution-independent. The sense of immersion is immediate and total even when the graphics feel like they’re from a decade ago, and the fun factor is absolutely enormous.

VR staple Superhot is a great example; you’re placed in a series of white rooms, instantly under attack from a number of red assailants, running toward you and attacking with a variety of weapons. You have to defend yourself with whatever is lying about, from guns and knives to hammers, saucepans and ashtrays, with your main advantage being the fact that time slows way down when you stop moving.

The fact that the furniture is rendered so simply it might as well be placeholder graphics, or that your enemies are naked red polygonal bodies, makes no difference. You feel the fear, and within minutes you’re contorting your body Matrix-style to dodge bullets and kick some red, polygonal butt.

Other games are much more visually detailed, but great gameplay is king in this new world of VR. A hulking, angry-looking opponent advancing at you from the other corner of a boxing ring is a viscerally terrifying thing to experience, even when you intellectually know it’s not real, and graphically he could be an overgrown sprite from an old Double Dragon game.

Sure, you’re probably looking like a goofball ducking, dodging and throwing right hooks and uppercuts in your empty kitchen (god help your roommates if they walk past at the wrong time), but it’s a helluva workout and a very intense experience.

I don’t feel like I need to take you through all the different games and experiences I’ve enjoyed in my month with the Quest, but there’s plenty to choose from in the Oculus store for around half to a third what you’d pay for a blockbuster Playstation game, and this device’s incredible ease of use and zero barriers to entry have garnered it huge sales in the nine months or so since its release.

It’s already outselling everything else in the Oculus range, and according to Nielsen, the Quest is single-handedly responsible for a 31 percent leap in annual VR hardware sales in the nine months or so since its release. This, folks, could be the tipping point for consumer VR; a device so easy, friendly and affordable that you’d be mad not to have one in your home for whenever you feel like poking your head into another world or two. The more headsets are sold, the more developers will invest in making the next generation of VR games and experiences.

If you can’t tell, I’m all in. I consider the Oculus Quest a masterpiece of usability, a gateway to all sorts of incredible experiences and a significant step forward into a mind-blowing virtual future we all know is coming. The fact that wireless, standalone VR will only get better from here in the coming years, with higher resolutions, better graphics processing and even wider fields of view – that’s just gravy. Of the 30 or so people I’ve thrown this headset on in the last month, almost every single one has been blown away.

The Oculus Quest starts at US$399 for a unit with 64GB of storage, or US$499 with 128GB. That price, to me, is absolutely nuts. You can pay thousands for higher-resolution headsets that still need a gaming computer and don’t offer anywhere near as seamless an introduction to VR. We don’t know what the PS5 or Xbox One X have up their sleeve for the end of the year, but right now the Quest is the game-changing king of the consumer VR space.