In Defense of Aurat March 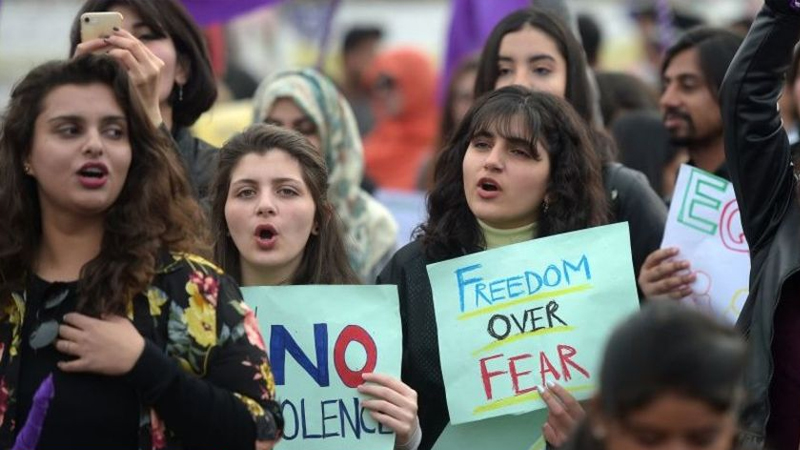 Met with controversy, Aurat March has been viewed as a platform tainted with the wrong image than its initial purpose that being of channeling the spirit of equality. This being a direct result of a media that likes to turn spurring activism into attention by portraying an image likely to gain negative connotations.

Aurat March allows for a platform free of political bias for all members of society to gather for the uplifting of female empowerment, yet with this display of freedom of speech, expression and protest the march is quickly targeted for its lack of preserving ‘Eastern’ feminist values and instead showing counter feminist agenda that will bring no good to the position of women in society. With media channels showing posters and slogans that they deemed to be problematic are in essence far from it. Placards such as “Khana Khud Garam Karo” or “Mera Jism Meri Marzi” are taken at face value to portray “Western” ideology than something applicable in the South-Asian Region more specifically to an Islamic Republic. But in reality these very posters and slogans remain to be the most relevant to us.

First and foremost, it is important to track down the basics of feminism, an ideology that is subjective to how you view it and express it. Feminism is inclusive and intersectional; it is not bound to one particular class, gender, ethnicity or religion. An inclusive approach that does not make how it is expressed by one individual any less meaningful than how it is expressed by the other regardless of the socio-economic background. With the various waves of feminism highlighting the progression and transitions within feminism and all actively achieved goals, feminism is a growing ideology. It is not one that is stagnant but engaging every individual to move within their social position for a better standard.

Secondly, to break down the position of Pakistan alone with its status of women in society and why that factors into us needing movements such as Aurat March. Pakistan has been infamous for its horrid conditions against women by being placed as 151 amongst 153 countries on their status of women. Our legislation clashes with cultural ideology making implication of these very laws favor patriarchy than to execute their actual purpose. Social stigma leads to women’s cases from abuse at a domestic level to public sphere never be heard nor reported. Our culture shuns us from ever taking stigmatized topics to the public sphere and remains a private matter. Within our Judiciary it was only during Benazir Bhutto’s era that five females were appointed as judges in three high courts and it took another eleven years before more women made it into the higher judiciary. If we have excluded women from the decision making processes we have failed at a very basic level to attempt to protect them.

It is these very reasons, where a woman is always told “boys will be boys” or justified actions that put women down whether that be in context to women-to-women encounters or women-to-men. It is because our nation continues to have flawed concepts of Jirga to objectification, it is because we make it a norm that we value the male more and it is because we teach not only females to accept these norms but males too. We are socialized to accept these values and never question them, never speak up against them and act in accordance to them. It is why we fail to accept movements such as Aurat march because we’ve been taught not to counter norms, and it is why we will fail in progressing as a nation unless we unlearn this toxic belief and relearn pragmatic ideals of equality.

At the same time it is important for us to learn why posters such as “Mera Jism Meri Marzi” or “Khana Khud Garam Karo” are a potent part of these movements. At a very basic level where these are taken at face value, people question the integrity of the movement on the philosophy of how warming up one’s own food will bring about large-scale change in the status of women in Pakistani society. At the same time it is this society that on November 30th 2017 let Roshan Bibi be murdered in the hands of her husband over an argument of serving cold food. It is the same society that on 1st October 2015 let Aniqa Khalid, a 12 year old, be murdered by her own father for not being able to make “gol” (rounded) roti. It is the same society that will not bat an eye before blaming the victim of rape and assault cases for the clothes they wear for what they have been through than the rapist. It is these slogans that matter when remembering these cases and numerous like them.

While these slogans may not be of importance to all, some factor in other problems such as equal pay, various forms of domestic abuse or other flawed socio-economic legislation to be integral to be brought down. The movement is far more diverse than just pinpointing it to one or two posters that may be easy to leech attention off of by being manipulated by the media. However, it is not just the question of the content present within the movement but also of how prominent those very problems remain. As mentioned before feminism is an all-inclusive approach, what is an important problem to one dynamic of society might not pose as the most important one to the other but it does in no way make the problem irrelevant. Whether the conundrum be on being objectified as a result of what they wear, unequal wages, lack of implementation of legislation, the lack there of separate solutions to all contribute to collectively uphold patriarchy. This is often done so by turning both, men and women, against these important movements.

Feminism acknowledges the progression made in society; it simultaneously notes the need of further advancements to be made. It does not render the inclusivity of men rather sees how inequality does not benefit either sex or any gender. Our issue is far deep rooted than to be shunned by a handful of publicized bad images of an essentially relevant problem. It is these very reasons why I march alongside hundreds of others.

The writer is Islamabad-based student