Pakistan and its political history 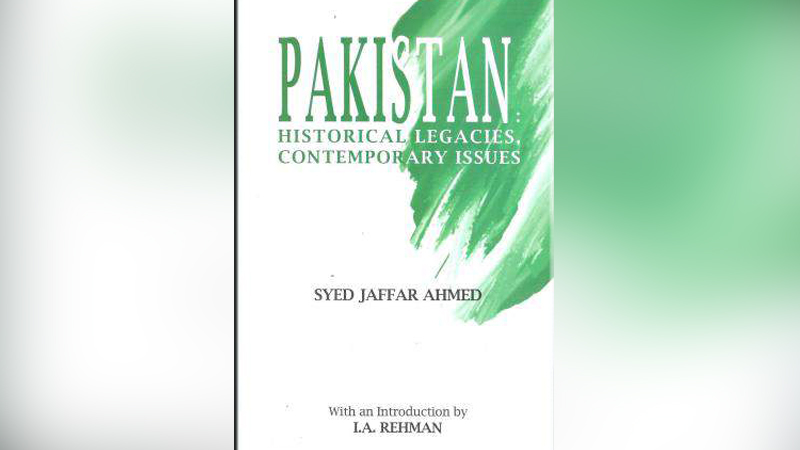 Dr Syed Jaffar Ahmed is no stranger to the world of learning and scholarship. He is a known social scientist, political activist, rights campaigner, academic and researcher. He retired as professor and director Pakistan Study Centre, University of Karachi a year ago. He holds PhD degree from the faculty of social sciences, University of Cambridge and has taught politics, freedom movement, and contemporary socio-political issues for decades. He penned down five books and compiled/edited 19 other books dealing with political history of Pakistan and its various facets.

Under his tenure, Pakistan Study Centre of Karachi University published scores of books, both in Urdu and English that threw light on the many an unexplored areas concerning Pakistan, especially the left politics. I can’t name all the books which he published but most certainly these books and memoirs analysed Pakistan’s history from the point of view of the oppressed and under privileged classes.

He organised many conferences, seminars exploring the socio-political history of Pakistan with special reference to the left wing political workers.

The present volume consists of articles written on varied topics relating to political history of sub-continent with a special reference to Pakistan. Titled as ‘Pakistan: Historical Legacies, Contemporary Issues’ and published by Royal Book Company Karachi, this book tries to chronicle the various existential crises which has been plaguing the country since its independence from the British imperialism in 1947.

While most of these articles were written for different English newspapers and usually such writings don’t have a long life. But not so in the case of these articles as they continue to remain relevant because we are moving at a snail’s pace or rather just static as a nation? Noted human rights activist, journalist and political commentator IA Rehman has introduced the book and its contents and rightly notes that ‘all almost all the problems and upheavals Pakistan has faced, and continues to face, can be traced to the acts of commission and omission done in the final phase of the Indo-Pakistan peoples struggle for freedom and during the first twelve years of independence”. He gives full marks to Dr Jaffar Ahmed for choosing to discuss these issues with sagacity and astuteness.

Without fully understanding these ailments that gnaw at the body politic of Pakistan, one can’t prescribe a remedy to steer Pakistan out of the abyss. Dr Jaffar Ahmed has divided these articles into four topics namely history, democracy, federalism and provincial autonomy ad lastly Pakistan in contemporary times. To set the historical record, Dr Jaffar Ahmed takes the readers down the memory lane as he dissects the tumultuous events leading to 1857 revolt. He notes that although the revolt bogged down due to the poor coordination and effective central command and host of other reasons, but it did ignite a flickering light in the hearts of the oppressed people. They were ruthlessly crushed and subdued in the end, but not their hope. They learnt their lessons the hard way and decided to wage a battle in the political arena which won him freedom after decades of exploitation and oppression. He pens a befitting tribute to poet-activist Hasrat Mohani who combined in himself the undying passion for written words and rebellion. Two articles on Feroz Ahmad, a scholar, journalist and writer in his own right, are much needed. He is a neglected scholar and Dr Jaffar Ahmed did the right thing by remembering him. There is another piece of Justice Dorab Patel who won laurels for his uprightness and integrity. Apart from these, there is plenty of food for thought in scores of articles collected in the book. He pines for democracy and democratic ethos in Pakistan and states that “past history has time and again shown that the tailor made constitutions and engineered political systems don’t work. In the context of its history, Pakistan would have to think to bring about a sustainable and viable democratic system”. He further suggests quite rightly that Pakistan can only flourish under democracy with millions of its people becoming the actual sovereign and the sole arbiters of their fate.

All said and done, this book can be very disturbing read for those who wish to read the actual political history of Pakistan as it would dispel many myths. And to bust these myths, one needs more such books so that we might come to terms with the reality staring at us. One hopes this books is read by students and common people alike.