“How is riding a motorcycle empowering for women? I’m trying to understand”, wrote a Business University alumna on her social media. It was perhaps for the sake of provoking a discussion there, however, some of the comments that were underneath I found quite interesting as the opinion on the matter was quite divided, ironically enough, amongst the women themselves. Although, yes, there were a few men who gave in some negative comments there, it was more surprising that a debate on the hype and the promotion of women riding bikes was taken up mainly by women. Perhaps people did not understand that women getting a mode of independent transport to work or just learning a life-skill which would make her an independent commuter, was in fact empowerment by enablement. 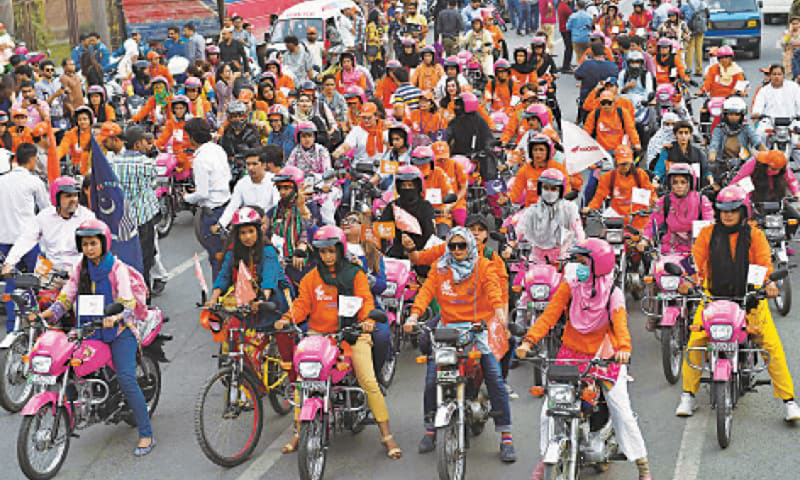 Research (by the World Bank Group) shows that developing nations need to keep the ease of mode of transport as a primary focus. The World Bank highly considers sustainable transport to be a major section in reduction of poverty, and they link that to solutions via the SDGs. That being due to transportation being an important factor in the transformation of any nation’s economy, moving goods and people from one to place to another. Inaccessible public transport is the main barrier to economic attainment be it a man or a woman, specifically in developing economies. However here on social media, it turned into for some, a question of modesty vs mobility, where the seated position/arrangement of the women was more of an importance to highlight.

Women were riding bicycles and motorbikes since 1947, how is this empowering now?” as one person stated. Answer: because if they were so in 1947 (at the independence of Pakistan), where are they now? Here was a complete blackout of that due to many reasons. Somehow, we lost that feature from our culture and our history. As to the questions on why not empower them by driving cars, the answer to that lies in our economic status; the mode of car transport is exceedingly expensive in regards to fuel prices and income levels in our part of the world. Keeping a car is still considered a luxury in Pakistan by the lower mid-level income strata.

Perhaps people did not understand that women getting a mode of independent transport to work or just learning a life-skill which would make her an independent commuter, was in fact empowerment by enablement

Another important consideration is the ease of accessibility to transport here in Pakistan which is a crucial problem being tackled by the government. Pakistan does have a framework that interconnects cities or local commuters and there is certainly an infrastructure present, however transport routes are not as efficient or accessible in comparison to the rest of the developing world. The state of public buses has only recently started getting a little better. The dependency or the unlimited freedom one would have on a motorbike (however a female commuter wanted to sit on it) is the main concern for us getting our women to remote places to work in order to earn.

For the World Economic Forum, a main concern on the Fourth Industrial revolution is where AI, technology and automation could widen the gap between those less currently enabled. Therefore, as part of the development rollout, they now have countries onboard with specific programs to re-skilling labour with life based skills. One such program in Pakistan is the establishment of the National Accelerator on Closing Skills Gap in partnership with the World Economic Forum.

One private venture which may have started out this chain reaction of comments and debate is the news of a private initiative called WoW. Women on Wheels by the Salman Sufi Foundation started training women on electric motorbikes. The Salman Sufi Foundation is an independently run social welfare organisation dedicated to women empowerment, equality, and social justice in Pakistan. Recently they have just signed an MOU with Cheetay.pk (a delivery service) who will hire WoW beneficiaries as part of their official fleet. One can only imagine a fleet of 10,000 women riders-mobile with employment opportunities.

If these numbers are true, one can use such parallel models set by the government on a much larger scale and incorporate a national mobility driving program to teach such skills. Incentives could be given perhaps as loans for bikes and/or the provision of motorbikes as a part of an achievements program and a life skills course; and yes, even cars as part of an investment venture could be created especially for women. This would create a nation-wide shift towards betterment not only in terms of modernisation but also the advancement of a universally accepted norm and mode of transport whilst teaching a life skill technique for the fourth industrial revolution. One such example in our daily lives is the women gaining employment by offering their services through different ride hailing apps.

From Muslim women who went to work and even war 1400 years ago on camels, which was a mode of transport at the given time in Arabia, to women now driving and on motorbikes we are certainly a few steps away to something that would energise our systems and a global perception towards modernity.

It is a fact that Women’s Empowerment movement is not confined to one straight course of action. There is no magic solution here so to speak in order to address it in one go to close the gender gap in workplaces. However, there are different ‘routes’ which are enabling factors to process the way by encouragement and lifting cultural barriers. And there are several challenges to confront. There is hope for a time when it would be normal to see a woman going about freely to her own business, whether it is work, or for just another drive out in the city.