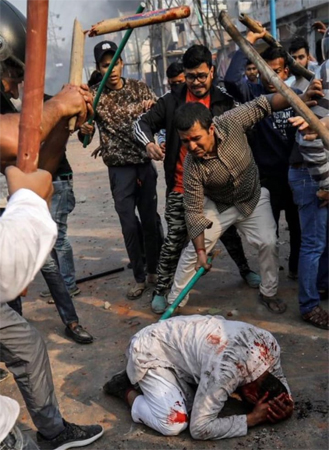 The curfew has been imposed in Maujpur, Jaffrabad, Chand Bagh and Karawal Nagar areas of North East Delhi. Delhi Police said on Tuesday that 23 people, including one policeman, have been killed in the violence and 200 seriously injured in Delhi.

Following widespread and rampant violence in Northeast Delhi a curfew has been imposed in Karawal Nagar, Chand Bagh, Maujpur and Jaffrabad. Delhi violence has claimed 10 lives so far. Northeast Delhi has become a virtual battlefield for clashes between mobs that either support or oppose Citizenship (Amendment) Act. The areas majorly affected in the violence include Jaffrabad, Maujpur, Chandbagh, Khureji Khas and Bhajanpura.

Here is another video that proves that @DelhiPolice is hand in hand with the Rioters. Rioters can be seen burning shops while Delhi police watches them as mute spectators.#SabYaadRakhaJayega! #DelhiRiots #DelhiBurning pic.twitter.com/xCEqz3zIpG

Violence in New Delhi has spiralled out of control. In Chandbagh, rioters set street shops on fire while acid was splashed over paramilitary forces deployed in Karawal Nagar’s Shivpulia. A scuffle broke out between rioters and security personnel at Chandbagh sometime ago.