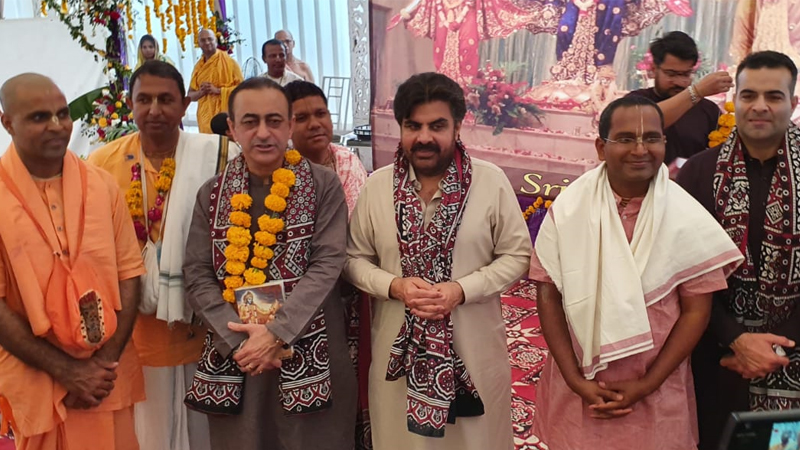 Speaking on the occasion, Syed Nasir Hussain Shah, while expressing his solidarity with the religious minorities said that, the role and contribution of the members of the minorities in the development and progress of the country was commendable. Minister for Information said that following the teachings of Quaid-i-Azam Muhammad Ali Jinnah, Pakistan People’s Party had always remained committed towards protecting the rights of the minorities. He said that the Sindh government would continue to do so under the guidance and leadership of Chairman PPP Bilawal Bhutto Zardari. He also mentioned that it was the government of Pakistan People’s Party that always reserved seats for the members of the minorities more than any other political party in the country.

Syed Nasir Hussain Shah said that he had come here with a message of peace. Provincial Minister for Information said that Chairman PPP Bilawal Bhutto Zardair and Sindh Chief Minister Syed Murad Ali Shah not only participate in the religious festivals of the minorities themselves, but they also direct the cabinet members to follow the same. He said that the PPP through plenty of legislations had protected the rights of the minorities in the province. He mentioned Sindh Child Marriage Restraint Act in this regard. The Minister vowed that the Sindh government would continue to introduce whatever legislation needed for the protection of the members of the minorities. While giving a comparison between Pakistan and India, he said that in India the members of the minorities were suffering immensely owing to the depressing policies of the Modi government, while in Pakistan they were free to move anywhere they wanted and practice their religion with complete freedom.

Meanwhile, while talking to the media Sindh Minister for Information, Local Government, Housing Town Planning, Religious Affairs, Forest and Wildlife Syed Nasir Hussain said that the government of Pakistan Tehreek-e-Insaf had given nothing to the people except for inflation and unemployment. The Minister for Information said that the problems of the people had increased manifold since PTI came into power. He said that people want to get rid of this failed government as soon as possible. Responding to a question Syed Nasir Hussain Shah said that Asad Umar and his colleagues were shedding crocodile’s tears. Responding to another question the Minister mentioned that Sindh was the only province where the local government institutions were intact and the representatives of the local government were discharging their responsibilities untiringly. He said that in contrast, in Punjab the local government had been dissolved even before it completed its tenure. And there was no chance of local government’s elections either in Punjab or in KP any sooner, he added. Syed Nasir Hussain Shah said that Chairman Pakistan People’s People Party Bilawal Bhutto Zardari had instructed to increase the authority of members of the local government institutions so as to further facilitate the people.