Islamabad High Court has recently suspended section 89 of Pakistan Penal Code in the capital territory and subsequently banned the practice of corporal punishment employed by teachers, parents and guardians in a bid to correct or punish the child’s conduct. Though it’s a welcome move, the same should be placed all over the country for the physical and mental well-being of our so-called “future of the nation.” 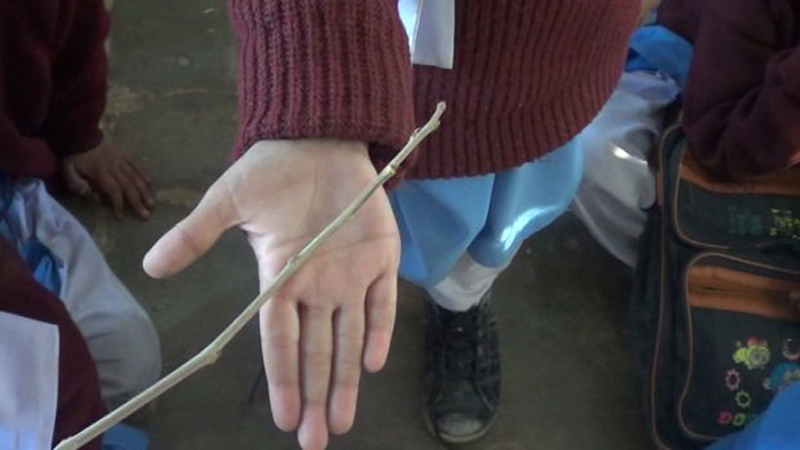 The suspended section had permitted parents, guardians and teachers of using reasonable corporal punishment as a tool to correct the conduct and behaviour of children under 12 years. It reads, “Nothing which is done in good faith for the benefit of a person under twelve years of age, or of unsound mind by or by consent, either express or implied, of the guardian or other person having lawful charge of that person, is an offence because of any harm which it may cause, or be intended by the doer to cause or be known by the doer to be likely to cause to that person.”

The practice of corporal punishment desperately failed in its objective of disciplining children and generating set and acceptable patterns of behaviour. Hence, it has been done away with in most of the developed world. But sadly enough, in Pakistan, its uselessness and harmful impacts on the behaviour and personality of children is yet to be realised.

What is corporal punishment? In what manners is it detrimental to children’s psychology and behaviour pattern? Corporal punishment, according to American National Association of School Psychologist (NASP) is “the intentional infliction of pain or discomfort and/or the use of physical force upon a student or child with the intention of causing the child to experience bodily pain so as to correct or punish the children’s behaviour.”

The punishment techniques include hitting with sticks, slapping, pinching and other inhumane measures like putting a pencil between fingers and pressing them hard, hitting on hands with palms turned down on the table and pulling ears. Generally, the practice of corporal punishment is viewed to be employed in the school setting alone. But what one may fail to know or focus on is that the same practice, perhaps more severe in intensity, is also employed in another setting: Alternative Care Settings like in places of safety, foster care emergency care, Day Care setups i.e. crèches, kindergartens, nurseries, preschools, family centres, penal institutions like borstal and juvenile prisons, madrassas and in homes.

Teenager Hunain Bilal succumbed to death due to torture from a teacher last September in American Lycetuff School, Lahore. This should have come as an eye-opener for all having a stake in the policymaking in the country. According to the police report, the teenager was badly slammed against the wall, repeatedly punched in the face and grabbed by the hair by his teacher in the classroom. Honestly speaking, a number of likes of Hunain became a victim (though short of death) of this barbaric act of “civilising children” in all settings and are barely reported “out of reputation” or “influential” issues of the perpetrator and victim.

The brutalities of physical assaults and punishment leave almost indelible detrimental thought patterns and behaviours throughout the future course of their lives. According to new research, youth violence rate is less in countries that banned corporal punishment. The otherwise learning and grooming of mind and body of a teenager are left badly traumatised by such punishments; leaving creative, inquiring free-will facilities. It makes children irrationally phobic that “a mistake will cause them shame or pain.”

Subsequently, they are not apt to try, take chances and risks required to survive and thrive. They learn less as learning is but the output or sum of the mistake one makes in life to learn and earn from. Moreover, corporal punishment makes children learn taking revenge. They assume that it is an injustice meted out against them and, hence, become less forgiving and patient in their later lives.

Additionally, children are highly likely to lose respect for their teachers, parents or guardians who physically assault or hit them.

Various researches have repeatedly shown that a child experiencing corporal punishment develops an increased aggressive behavioural pattern towards their fellows, approval tendencies of violence and torture in their relationships, bullying of others and more aggression to their parents. Increased bad behaviours are among the other detrimental impacts of physical punishment. Cheating, lying, bullying and involvement in crimes are some the behaviours resulting from corporal punishment. Additionally, psychological traumas, mental health challenges, behavioural disorders, depression, anxiety disorders, suicidal thoughts, substance abuse, emotional instability, lowered sense of self-esteem and hostility also result from torturing of a child in any setting.

According to the UNICEF data, laws banning corporal punishment exist merely in 60 countries; putting round 600 million children under five prone to physical assault and punishment. The research further shows that the countries that ban smacking children altogether experience 69 per cent less physical fighting and violence.

Despite being among the first to ratify the UN Convention on Rights of Child, which declared corporal punishment as a legalised form of violence and be eliminated from all types of settings through lawmaking, administrative, educational and social endeavours, Pakistan failed to do away with this horrific menace. Sadly enough, there is, to date, no coherent and uniform policymaking and legislation in Pakistan that may bar physical punishment in all settings.

The IHC’s move should serve as an impetus to create “violence-free space for children in all settings.” Taking the IHC verdict of suspending section 89 of PPC ahead, the same should be put in place all over the country. Moreover, the colonial era’s section 89 of PPC should be abrogated altogether. Merely abrogating a section won’t serve the purpose of eradicating physical violence of children unless the same is penalised through coherent and uniform legislation and its effective implementation.

Apart from legislation, awareness programs and social mobilisation campaigns, regarding the damaging effects of corporal punishment, be initiated at all administrative levels and the significance of violence-free child-rearing and grooming be encouraged in all setting. Only through coherent and directed efforts, a non-violent, conducive and child-friendly atmosphere be created where the future of the nation could grow and thrive at their fullest.