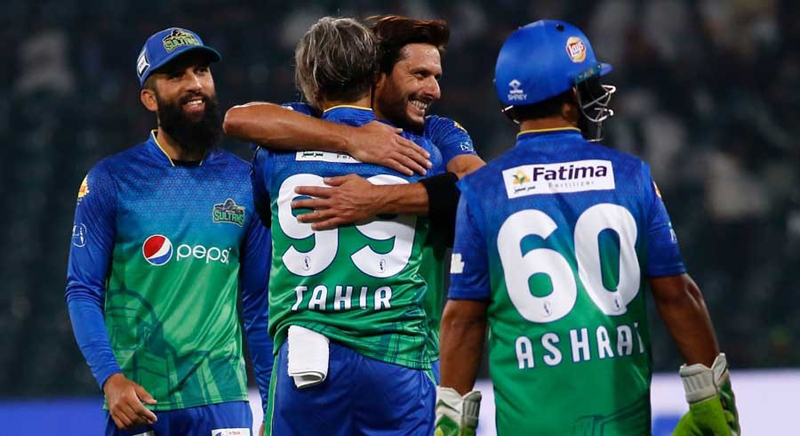 LAHORE: Multan Sultans defeated Lahore Qalandars by five wickets in the third match of the ongoing HBL Pakistan Super League5 match at Gaddafi Stadium here on Friday night. Multan, led by Shan Masood, chased down the 139-run target in 16.1 overs. Opening the batting, Shan top-scored with 38 off 29 balls, with four fours and a six, in the run chase. In the middle order, Rilee Rossouw made 32 off 28 and Shahid Afridi scored a quickfire 12-ball 21. Both batsmen struck two fours and a six each. Earlier, Lahore scored 138 runs for the loss of eight wickets after they were asked to bat. The opening pair of Fakhar Zaman and Chris Lynn provided Lahore a solid start with a 59-run stand in 5.2 overs. Lynn, who hit four fours and three sixes, anchored the partnership by scoring 39 from 19 balls, while Fakhar made 19 off 14. As Lahore looked to have gained the momentum, Moeen Ali’s double-blow in the last Powerplay over turned the innings on its head as the off-spinner accounted for the wickets of both openers. The wickets sparked a collapse as Lahore lost their next four wickets for 44 runs. Lahore captain Sohail Akhtar staged a recovery to take his side to a decent score. The right-handed batsman made 34 off 30 balls and struck three sixes and a four during his stay at the crease. For Multan, Imran Tahir and Mohammad Ilyas were the other bowlers with two wickets each next to their name. For taking two wickets for 21 runs, Imran was named player of the match.