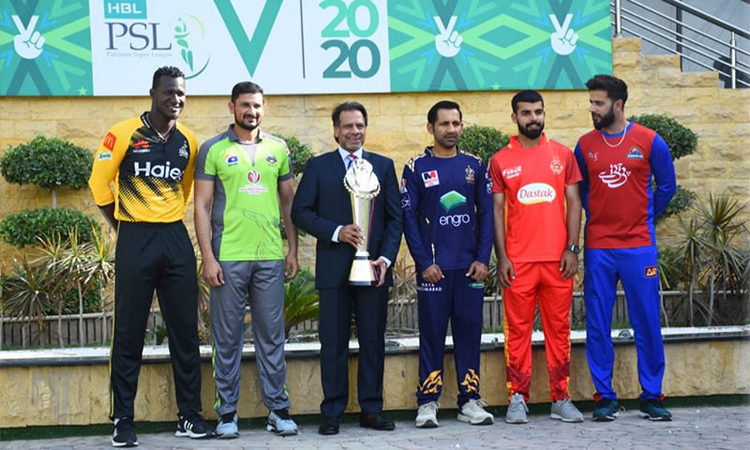 LAHORE: Quetta Gladiators will clash with Islamabad United in opener when HBL Pakistan Super League5 rolls into action at National Stadium Karachi on Thursday (today). As many as 350 artists will perform in the colourful and dazzling opening ceremony. The metropolitan city is expected to be set alight as artists from different music genres – Sufi, pop, rock, bhangra and folk – will come together to perform at what will be the biggest opening ceremony in the history of the PSL. Artists like Abrar-ul-Haq, Aima Baig, Abu Mohammad, Fareed Ayaz, Rahat Fateh Ali Khan, Sajjad Ali, Sanam Marvi and rock band Soch will embellish the ceremony with their breath-taking performances, while Ali Azmat, Arif Lohar, Haroon and Asim Azhar will perform PSL 2020’s anthem Tayyar Hain. The glittery ceremony, which will be held before the opening match, will also include riveting acts and a spectacular fireworks show. The ceremony, which will be approximately an hour long, will kick-off at 6:45pm. The toss for the first match will be held at 8:30pm, while the much-anticipated first ball of the HBL PSL 2020 will be delivered at 9:00pm.

Although a domestic tournament, the six-team PSL will be held across four venues with Karachi staging nine, Lahore 14, Rawalpindi eight and Multan three. When the 2020 edition of the PSL starts in Karachi today, Darren Sammy of the West Indies and Shane Watson of Australia will be among 36 foreign cricketers involved in the six franchises. The return of international cricket has been a slow process following an attack on the Sri Lankan team’s bus in Lahore during a Test series in 2009. For this T20 event, the PCB has worked with the Federation of International Cricketers Association and also shared its security plans with foreign stars to make them feel safe.

Cricket went into isolation for more than six years after the attack near Gaddafi Stadium in Lahore in 2009. There was a ray of hope in 2015 when Zimbabwe toured for a limited-overs series. Over the next two years, Sri Lanka and the West Indies also played limited-overs matches in the country. The PCB overcame another barrier when it hosted Test matches last year in Pakistan for the first time in a decade. In a bid to reassure cricket officials from countries such as Australia, England, New Zealand and South Africa about the security situation, Pakistan invited the Marylebone Cricket Club (MCC), the guardians of the laws of cricket, for limited-overs matches in Lahore. Led by former Sri Lankan captain Kumar Sangakkara, who is also the MCC president, the players have had VIP level security, which is a slightly lower level than that provided to Bangladesh and Sri Lankan squads for recent series.

This edition will be the first one to be played in Pakistan in its entirety. Since the advent of the league in 2016, the tournament has gradually moved to Pakistan with this year’s edition nothing less than leapfrog for the coveted league. The first edition that included five teams was played entirely in the United Arab Emirates; the second edition saw the first step towards its homecoming with the final between Peshawar Zalmi and Quetta Gladiators at the Gaddafi Stadium Lahore. The 2018 edition was the first instance that two Pakistani cities hosted the PSL matches. Lahore was host to two play-offs while Karachi staged the final in which Islamabad United prevailed against defending champions Peshawar Zalmi. It was also in this very season that Multan Sultans were added as the sixth franchise. The 2019 season had an unprecedented eight games in Pakistan. Karachi’s National Stadium was the host to all matches, including the three play-offs and the final between Quetta Gladiators and Peshawar Zalmi which Quetta won convincingly to lift the prestigious HBL PSL trophy for the first time.

The 2020 tournament is carrying total prize money of US$1million. The winners of the March 22 final under Gaddafi Stadium lights will collect a cheque for U$500,000 along with a glittering and brand new trophy, while the runners-up will receive a cheque for US$200,000. In addition to the above, there will be number of other cash awards, including US$4500 each to all the 34 player of the matches. Furthermore, US$80,000 will be equally distributed to player of the tournament, best batsman, best bowler and Spirit of Cricket. The remaining amount will be distributed for other match-related awards like best catch, best run-out and most sixes.

The 34-match 32-day PSL 2020 will be the biggest cricket extravaganza to take place in Pakistan and first since the six-team Asia Cup 2008. Twelve years ago, the then four Test playing countries were joined by the United Arab Emirates and Hong Kong in a 13-match tournament in Karachi and Lahore. Sri Lanka had defeated India in the final at the National Stadium by 100 runs. Prior to this tournament, Pakistan had staged the ICC Men’s Cricket World Cup 1987 and 1996. In 1987, Pakistan had hosted 10 matches at seven venues, while 16 matches were played at six venues in 1996.