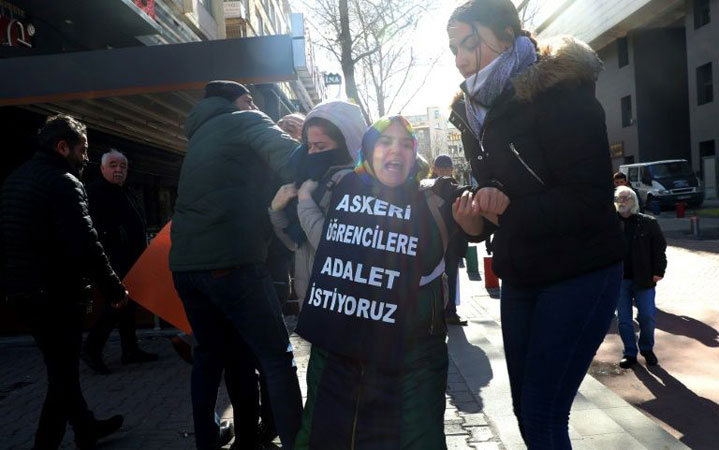 Wearing a colourful headscarf and long coat to guard against a bitter Ankara frost, Turkish mother Melek Cetinkaya would not usually catch the attention of the police.

But when she dons a vest calling for justice for her imprisoned son Furkan Cetinkaya, it is only minutes before two female police officers silently grab her and bundle her into a white van.

Since her protests began last September, the 43-year-old mother of three has been detained nearly 30 times.

Cetinkaya is undeterred because she is fighting for her son, an air force cadet who was just 19 years old when he was jailed for participating in the failed coup against President Recep Tayyip Erdogan in July 2016.

Hundreds of cadets have suffered the same fate, facing decades in prison for their role in something which their families say they had no way of comprehending.

“How can these children have carried out a coup?” Melek Cetinkaya asked at the protest last week, as she urged passers-by “to learn about the injustices, illegalities and unfair legal process” her son and others experienced.

“Please ensure the cadets’ voices are heard,” she shouted moments before she was detained.

A child nearby asked, “What’s going on?” but his father quickly hushed him and walked away.

After the coup attempt, tens of thousands of people were arrested and nearly 150,000 public sector workers were sacked or suspended as part of a crackdown on groups linked to the coup and other government opponents.

A total of 355 cadets have been given life sentences over alleged involvement in the coup, opposition MP Omer Faruk Gergerlioglu said, even without any “concrete evidence” — and most would have been simply obeying their superiors.

“The sentences are completely unjust. They are treated without mercy and being scapegoated,” said Gergerlioglu, of the leftist Peoples’ Democratic Party.

It was two days after the coup when Cetinkaya learned her son had been arrested.

Her initial hope that the system would bring justice faded as the trial progressed.

“When the appeals court approved (the verdict), I came to believe there was no justice in this country and I started seeking justice on the streets,” she told AFP.

She insists her son is innocent and that no one in the family had links to US-based Muslim preacher Fethullah Gulen, whom the government accuses of ordering the coup attempt.

Furkan was in a training camp in Yalova, northwestern Turkey, when he and dozens of others were told by their commanders they had to return to Istanbul because a terrorist attack had occurred.

They returned in the night to find the city in chaos, with reports of tanks on the streets and soldiers storming public buildings.

Unaware of the bigger picture, the cadets say they ended up on the streets chanting the national anthem, with no idea that they would later be accused of supporting a coup.

Furkan’s lawyer says he and his fellow cadets were not involved in any of the clashes between pro-coup soldiers and vigilante civilians that broke out later in the night.

The judge nonetheless jailed the teenagers for life for “attempting to abolish the constitutional order”.

Andrew Gardner, of Amnesty International, says the purged judiciary lacks the independence or capacity to assess who is innocent or guilty.

Their final hope is the court of cassation, the top appeals court, which has overturned some coup-related convictions.

Every fortnight since her son’s conviction, Cetinkaya has made the 20-hour round trip by bus to visit him in Silivri prison on the outskirts of Istanbul.

It was during one of these journeys that she decided to hold a “justice march” from Ankara to the prison to highlight her son’s situation.

But she was arrested last month before she could even begin the walk, and held for three days. She now faces up to three legal cases over her protests.

Judicial documents seen by AFP accuse her of being a member of an “armed terrorist organisation”.

In an interview at her home, she said she was previously unaware of injustices in Turkey, and had even voted for Erdogan in the past.