Journalism in Pakistan is not a piece of cake!

One can be completely dumbfounded as to how a journalist is treated in our country. A journalist serves as a cornerstone of society; trying to risk his life to broach the truth while often having to face perilous situations, which can often lead to a sticky end. Yet, despite knowing all the dangers through which a journalist has to go through the day, the safety of these valorous individuals is still held together by just a thin thread; ready to be snapped at any moment by a sinister force. 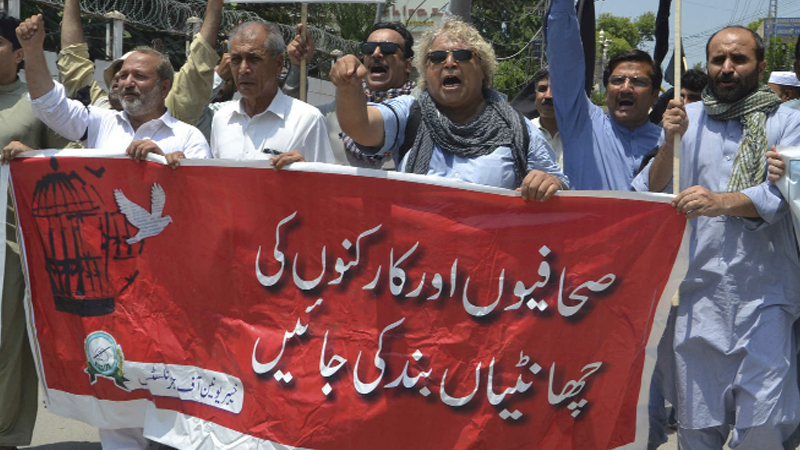 Among the plethora of problems these journalists face, violence, both physical and verbal, has been the most horrific predicament in a journalist’s career. It is, rather, appalling to find out that a number of journalists have been a victim of violence or even have been killed on duty. From 2012 to 2016, UNESCO’s Director-General condemned the killing of 530 journalists; an average of two deaths per week. During the previous five-year period (2007 to 2011), UNESCO recorded 316 killings. The year 2012 proved to be the deadliest year on record, with 124 journalists killed. The majority of journalists killed between 2012 and 2016 occurred in countries experiencing armed conflict; representing 56 per cent of the overall killings.

We can just aghast at the brutality these journalists are facing and Pakistan is no exception. In the course of six years up till 2019, 33 journalists had been killed. Among them was Syed Saleem Shahzad, an investigative journalist, who was found dead in a canal in North-east Pakistan, showing signs of torture, a day after he was kidnapped. It was clear Shahzad had been targeted by a group for being too open on very sensitive topics. But isn’t that the essence of journalism–to openly be able to speak out your opinion and bring the truth to people?

Another victim of this inhuman brutality was a journalism student, Mashal Khan, who was mercilessly lynched by an angry mob in the premises of the university on April 13, 2017, over allegations of posting blasphemous content online. Following investigations, the Inspector General Police later stated, “We did not find any concrete evidence under which investigation or legal action can be launched against Mashal,” which was a crestfallen, not only for the journalist community but for the entire nation, bewildered by what had happened to people who called themselves as guardians of the religion but were, in reality, absurd heretics and religious zealots. Women journalists also face specific dangers and are especially vulnerable to sexual assaults, whether in the form of a targeted sexual violation often in reprisal for their work; mob-related sexual violence aimed against journalists covering public events or the sexual abuse of journalists in detention or captivity. Many of these crimes are not reported as a result of professional and influential cultural stigmas.

It is quite common to see a very strong politician, landlord or an influential person trying not only to manipulate the upper echelons of the media community but also bribing and trying to hinder the works of small-time journalists as well; exploiting the weaknesses of such journalists by using money as the best possible way. Most of these small journalists are often paid very meagre salaries so one must have to bear the sin of bribery for trying to be the breadwinners for their families. These journalists are often paid to manipulate breaking stories and alter news you see on the internet, newspaper or television. These journalists with low wages end up doing underhanded works for such corrupt individuals. Even though we have reached the 21st century, we still haven’t realised the threat of impunity for crimes against journalists when it comes to tackling high profile cases linked to influential people. Its root cause has to be attributed to a lack of political will to pursue investigations, including fear of reprisals from criminal networks in addition to inadequate legal frameworks, a weak judicial system, lack of resources allocated to law enforcement, negligence and corruption.

It is great to see many international organisations slowly stepping up to protect the solidarity, charisma and sacrifices these journalists are making but in Pakistan, journalists are still at a risk. They are forcefully made to walk on thin ice. Pakistan is a country where not only local but even international journalists, like Daniel Pearl, are not safe.

To this day, it feels like one of the darkest days for Pakistani free journalism when Pearl was abducted and brutally murdered by terrorists operating within Pakistan. For a high profile Wall Street journalist like Pearl to be easily kidnapped and killed by terrorists, targeting local journalists would not be much of an effort for influential people. However, Pakistan has solved the problem of terrorism and almost all terrorist networks have been defused by the intelligence agencies and Pakistan Army.

Still, the mafia within the country is targeting the journalists. Thus, it is important the government properly cooperates with international organisations to bring forth new laws in the legislature, which could provide complete safety for journalists.