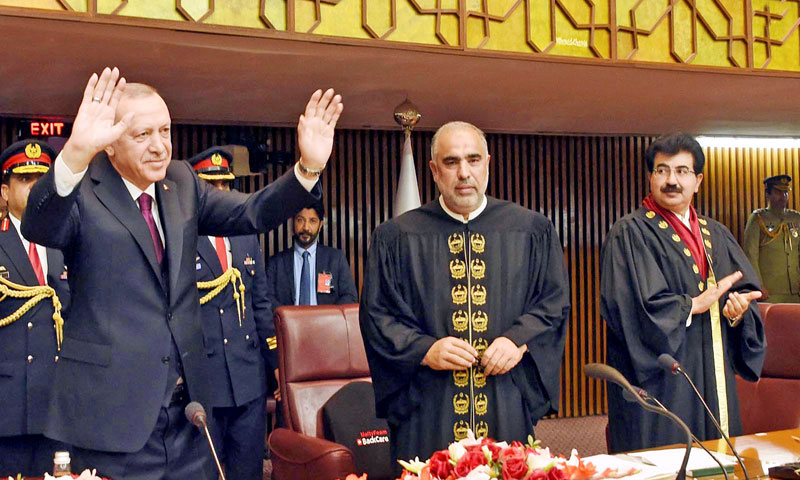 Stressing a ‘peaceful and just solution’ to Kashmir dispute, Turkish President Recep Tayyip Erdogan on Friday said Turkey will continue to extend unflinching support to the stance of Kashmiri brethren at all forums.

“Turkey believes that the Kashmir issue cannot be resolved through oppressive means but on the basis of principles of justice and peace,” the Turkish president said in his address to a joint session of parliament.

This was the fourth time Erdogan has addressed the parliament of Pakistan. Prime Minister Imran Khan, cabinet members, parliamentarians from treasury and opposition benches, services chiefs and ambassadors attended the session.

The 24-minute speech by Tayyip Erdogan also focused on Pakistan and Turkey’s joint roadmap of development and prosperity and need for unity among Islamic countries to fight common challenges including poverty and Islamophobia.

President Erdogan mentioned that Turkey openly defended the just struggle of Kashmiris at the 74th session of United Nations General Assembly in New York and during all meetings of the Organization of Islamic Cooperation (OIC). He said India’s unilateral step on changing the status of Jammu and Kashmir has further aggravated the problems faced by Kashmiris. “Curbing the freedom rights of Kashmiris and putting them under siege will be in no one’s interest,” he said, adding that only peaceful negotiations can pave the way towards solution acceptable to all the stakeholders. “Today, the issue of Kashmir is as close to us as it is to you [Pakistanis],” he said, reiterating Turkey’s support for Kashmiris.

Erdogan stressed that apart from their mutual rifts, it is religious duty of all Muslim countries to stand for the oppressed Muslims anywhere in the world, be it in Palestine, Cyprus or Kashmir.

President Erdogan said Pakistan is heading in the right direction in its journey towards development and mentioned that the tough road to prosperity requires determination, faith and struggle as main ingredients. He expressed the confidence that in an environment of cooperation among legislature, judiciary and armed forces, Pakistan will soon reap fruits of economic stability as immense foreign investment poured in during recent months.

Erdogan said he had arrived along with a high-powered delegation to participate in the sixth meeting of Pak-Turk High Level Strategic Cooperation Council with heavy agenda on strengthening business relations and other areas. He said a roadmap will be devised based on strategic economic framework, outlining trade, investment infrastructure and tourism. “The 210 million people of Pakistan and 8.3 million Turkish people will stand shoulder-by-shoulder in achieving their common goal of strong bilateral economic ties,” he added.

He recalled that implementation on the previous agreements, reached upon during visit of Prime Minister Imran Khan to Turkey, is in full progress.

Turkish President Erdogan paid tribute to Pakistan in successfully overcoming a long fight against terrorism. Erdogan said he is well aware of the difficulties faced by Pakistan in dealing with aftermath of regional conflicts as Turkey itself braved for 35 years, the terrorist and separatist activities of extremist outfits including Daesh, Kurdish PKK and Fetullah Gulen’s FETO. He thanked Pakistan’s for allowing to take over FETO-linked schools in Pakistan by Turkey’s Maarif Foundation and also for supporting the ‘Operation Peace Spring’ conducted by Turkey in north of Syria. “Contrary to those indulging in mere rhetoric of democracy and human values, Pakistan has always extended a real support to Turkey for which we are extremely grateful,” he said.

Erdogan lauded Pakistan’s efforts for resumption of peace in Afghanistan with an objective of regional stability. He criticized the Mideast peace plan presented by US President Donald Trump, saying it is meant to illegally occupy the land. He also condemned the Israeli attacks on the Bait-ul-Maqdas.

President Erdogan said Pakistan is like a second home for him and termed it a moment of pride to address the country’s parliament. He said Turkey and Pakistan enjoy unprecedented closeness in relations, based on love and affinity, rather than of interests.

On bilateral ties rooted in history, he recalled that the Muslims of Subcontinent in 1915, now Pakistan, took rallies in Lahore in support of the Turkish armed forces, defending their Fort in Turkey. “We have never forgotten and will not forget the help, which the Pakistani people delivered, during our War of Independence by piling up their own bread,” he said. “Dear brothers and sisters who else should we love and feel affection for other than you. Our friendship is not based on vested interests but on love,” he said.

Speaker National Assembly Asad Qaiser termed Erdogan a true friend of Pakistan for his undeterred support for the country at the international forums. He said the visit of Turkish President has taken place at a time when the world is faced with the challenges of Islamophobia. He paid tribute to President Erdogan on behalf of the government and people of Pakistan for extending firm support to the Kashmir cause.

Earlier on arrival of President Erdogan in the House, a noticeable jam-packed parliament gave him a standing ovation and thumped desks as a welcome gesture. National anthems of two countries were also played on the occasion.