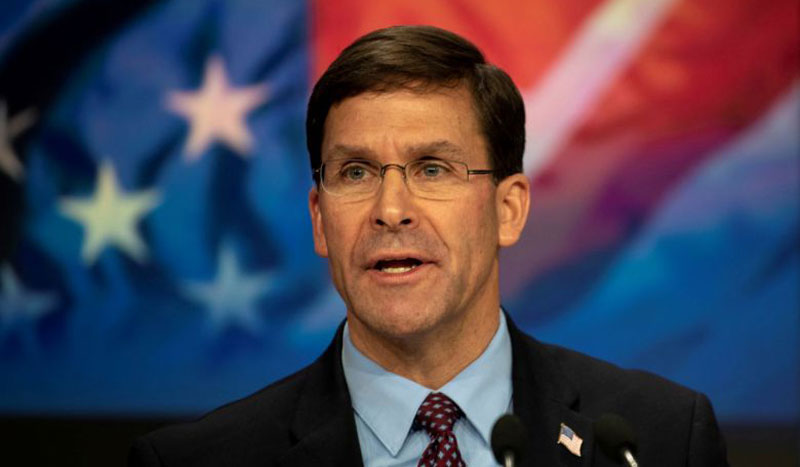 The United States has secured a seven-day reduction in violence in talks to help seek a negotiated settlement in Afghanistan, Pentagon chief Mark Esper said on Thursday.

The announcement came as NATO defence ministers met in Brussels and a day after Afghan President Ashraf Ghani reported ‘notable progress’ in negotiations with the militants. “The United States and the Taliban have negotiated a proposal for a seven-day reduction in violence,” Esper told reporters, dubbing his meetings with NATO colleagues ‘productive’. “We’ve said all along that the best, if not the only, solution in Afghanistan is a political agreement. Progress has been made on that front and we’ll have more to report on that soon, I hope.”

Esper did not say when the partial truce would begin, but on Wednesday a Taliban official said that the group will begin a ‘reduction of violence’ on Friday.

“It is our view that seven days for now is sufficient but in all things our approach to this process will be conditions based, I will say it again, conditions based,” Esper said. “So it will be a continual evaluative process as we move forward, if we go forward.”

Washington and the insurgents have been locked in grueling talks that have stretched over more than a year, seeking an end to what has already become America’s longest war. Citing Afghan and US officials, the New York Times has reported that President Donald Trump had given conditional approval to a deal with the Taliban to allow him to start withdrawing US troops.

The development comes as a senior Tehreek-i-Taliban Pakistan (TTP) commander was killed by a bomb in eastern Afghanistan on Thursday, the latest such incident to target the group in recent days.

Sheharyar Mehsud, chief of a militant faction which is part of the umbrella TTP, was the target of the remote controlled blast in Kunar province, a TTP commander in Pakistan said. A Pakistani intelligence official who confirmed the incident said Mehsud had fled to Afghanistan in 2016.

The blast comes nearly two weeks after two other key TTP leaders – Khalid Haqqani and Qari Saifullah Peshawari – were killed in a clash with security forces.

The TTP has confirmed the killing of one of their top leaders in Afghanistan. Shehryar Mehsud, leader of the Hakimullah Mehsud group of TTP, was killed by a roadside improvised explosive device (IED) in Kunar province on Wednesday evening, said Nusratullah Nusrat, a purported spokesperson for the outfit. Shehryar’s lieutenant Maulana Wali Muhammad has been appointed as the group’s new chief ‘after consultations with all senior commanders’, the statement added. No further details were provided about the incident.