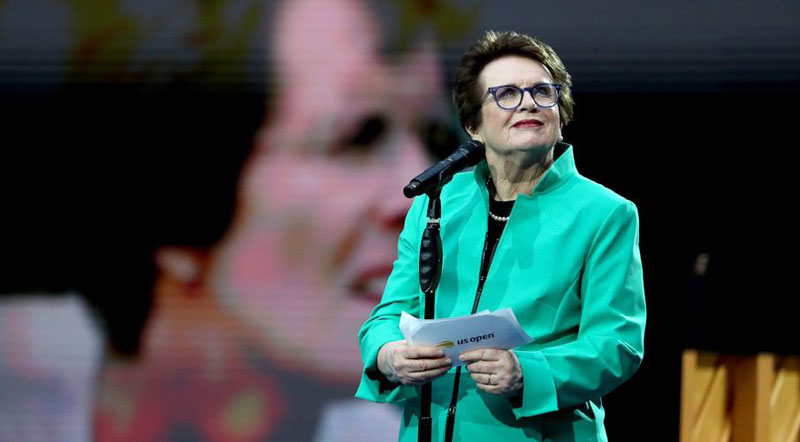 LONDON: American trailblazer Billie Jean King says the revamped Fed Cup Finals taking place in Budapest in April shows women’s tennis remains the leader in the battle for equality for women’s sport. King, who fought the establishment to create the professional Women’s Tennis Association (WTA) in 1973, was present at the Fed Cup draw on Tuesday as the 57-year-old women’s team event launched a new chapter. Twelve nations featuring many of the world’s leading women players will descend on the Hungarian capital for a week-long event boasting $18 million (13.90 million pounds) in prize money. Tennis already sets the bar with equal prize money paid to women and men at Grand Slam tournaments but King says the fact the Fed Cup prize pot matches that of the revamped Davis Cup held in November is “huge”.

“This is an unbelievable opportunity for the next three years,” the 76-year-old King, a Fed Cup Global Ambassador, said after the draw ceremony held in the stunning surrounds of Budapest’s Museum of Fine Arts. “It makes me very proud that women’s tennis is showing that it’s still the leader in women’s sports. That means a lot to me, se we must continue to be that.” King, who on the court won 12 Grand Slam singles titles (eight in the professional era) but also fought off court for the creation of a professional Tour and for equal prize money, played in the first edition of the Fed Cup in 1963. That event, started 63 years after the first men’s Davis Cup, featured 16 nations in London, with King helping the United States to victory over Australia in the final.

Worlds apart: The new format, featuring 12 nations battling for the title over a week, is something of a throwback to the first edition, but King says it is actually worlds apart. She was paid daily expenses to cover dinner while the winning team in Budapest will share $3.2 million with $1.2 million going to the winning federation. Teams who fail to progress out of the four groups will still share $500,000. “That’s how it was, we were amateurs,” said King, who paired with Darlene Hard to beat career rival Margaret Smith (now Court) and Lesley Turner in a deciding doubles in the final.

“But I was desperate to have our name first on the trophy.” “That first Fed Cup featured 16 nations, total. This year 116 started out. That gives you a measure of the huge growth. “And the new format? It’s huge. The players wanted one less week in the calendar, they got that. And they wanted more money, and the ITF came up with the money. “It’s equal with Davis Cup which is a very important message because the ITF has really basically governed themselves to have equality, to make sure they are fighting for equality. They are not just talking, they are showing.” King said women’s tennis was an example for other sports, especially in the United States. “We need all women’s sport thriving. Baseball is 150 years old, NFL is a 100 years old and NHL is 100 years old this year, and there’s no women’s leagues! That’s another thing on my brain to try and figure out. We took our stance 50 years ago. We were going to get suspended. We didn’t know what would happen to us but we fought like crazy for three things: to have a place to compete, to be appreciated for accomplishments, not just looks, and to make a living. “That was the dream for future generations and they are living it now.”