The massive population growth in Pakistan is 2.4 percent per year, and if the population keeps exploding with this rate, then, arguably, the population will be doubled in the few next years. The United Nations has also warned that Pakistan will contain 403 million inhabitants in 2050, and within 37 years it will be fourth most populated country in the world. The population growth of the country is approximately double than other regional countries like India, Bangladesh and Sri Lanka. Each family in Pakistan, on average, has 3.1 children per woman.

The unbridled population is worrying given the heavy burden to the country. Not surprisingly, on the Human Development Index, Pakistan is ranked at the 150th position. Among all the countries on the index, Pakistan has the highest population growth of 2.4 percent annually. Since independence Pakistan has grappled with severe consequences, and population explosion is at the heart of all its problems and is a matter of grave concern. It has inhibited the socio-economic development of the country.

The vicious cycle of population growth is the root cause of poverty. The poverty and population of the country are rising simultaneously. According to a report ofthe World Bank, 37 percent of the population is living below the poverty line. Controlling population growth should be the top priority of the government but unfortunately, it is not.

The vices of poverty are directly interlinked with the economy of the country. The population has raised the poverty, and poverty has hindered the economic growth

On the basis of a neo-Mathusion analysis, poverty in Pakistan is due to the rise in population. The vices of poverty are directly interlinked with the economy of the country. It is clear that the economy has been sinking. The population has raised the poverty, and poverty has hindered the economic growth. Pakistan could not show any substantial economic development nationally or internationally. In Pakistan,60.3 percent of the population is living on less than two dollars a day, and 22.6 percent is living on less than a dollar a day. In the previous year, the gross domestic product growth was 3.3 percent only, causing an extremely disappointing and abject condition for the country. 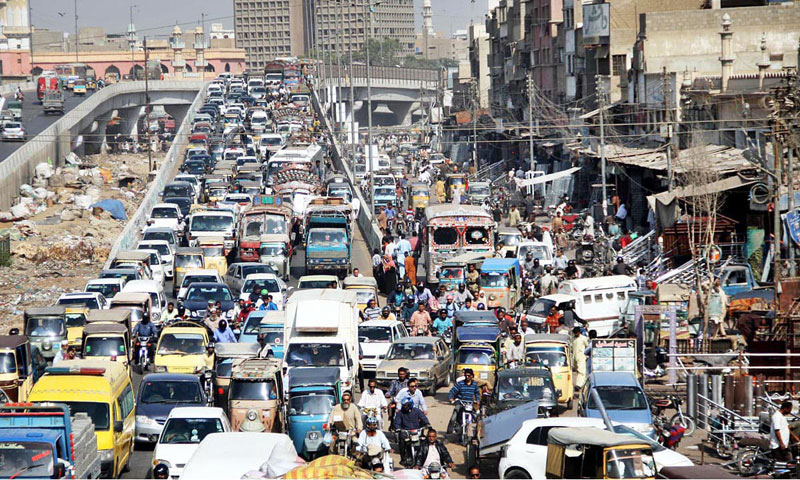 On the other hand, an alarming increase in population has put immense pressure on the political system. There are political consequences of population increase. The current government is facingmany difficulties due to its inability to provide social services, education, health, jobs, housing, security, and electricity. According to a recent report published by UNESCO Global Education Monitoring Agency, the literacy rate of Pakistan is 57 percent;the report predicts that one in four Pakistani children will not be completing primary school by the deadline of 2030. Pakistan also fares very poor in the sector of health. Only 27 percent of the population has clean water for drinking.

Though Pakistan is overwhelmed with numerous issues because of population explosion, there are measures that can bring the issue under control. To begin with, the task force established by the federal government, constitutingof federal and provincial ministers, should be reinforced to show more pro-activeness to accomplish its three targets: increasing contraceptive prevalence rate to 55 percent; reduction of fertility rate from 3.6 birth per woman to 2.1; decreasing the population growth rate to 1.5 percent. The task force on population and family planning strategy control is being funded with 10 billion rupees each year, however, it has shown no effective result so far.

Secondly, government along with civil society and community building institutions shouldadopt a collaborative approach for the challenge of implementing a proper birth control strategy.Government should introduce public awareness programmes and seminars at educational platforms on population control with the inclusion of health departments. Between 1995 to1998, the fertility rate was decreased as the role of lady health workers proved very effectivewith visitsto rural areas and spread of awareness among people about family planning.

Thirdly, the greatest social measure is to educate the citizens. When citizens are educated, theyunderstand the perils of population explosion. Education makes the aim of government easy to understand. Educated people understand the socio-cultural setting of a country along with its religious ethos and serve as an effective tool to promote population control narratives.

Fourthly, media is also one of the main sources to spread the knowledge and awareness regarding population explosion and to motivate women to use contraceptives and have family planning. Media persons can discuss the issue in talk shows and write about it in newspapers.

Lastly, many initiatives can be taken to decrease the unhindered explosion of population by making laws on restriction of child marriage and limitation of family size. China’a one-child policy is a good example.

If these ideas are implemented with practical measures the population increase can be halted.

The writer is a socio-demographic researcher