The pandemonium in Iran

The topsy-turvyness before elections is a norm everywhere but in Iran’s case, it is beyond chaos and disarray. With the ongoing protests and unrest lingering across the country, Iranians will go to the polls to vote in the unicameral Majles on 21st February 2020. The 2020 parliamentary elections of Iran came amid manifold crisis, both domestically and internationally. 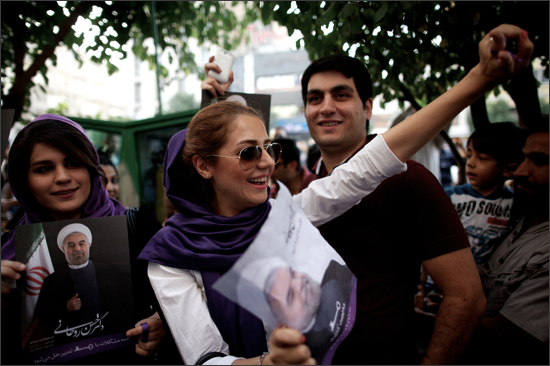 The anti-government protests started on 15th November 2019, with people waving the anti-government slogans and demanding the overthrow of Supreme Leader Ayatollah Ali Khamenei, after an overnight hike in oil prices. Indubitably, it gave a slight glimpse of 1978-79’s protests when the regime tried to dissipate the protesters by brutalizing them – this time was no exception. According to a report issued by Amnesty International, 304 people died in government’s crackdown on the protesters, including children and women.

Iran’s economic distress was the main prerequisite of the civil disorder and the United States’ sanctions on Iran were the prerequisite of economic distress. After the crippling sanctions on crude oil production and trade, the oil and energy sector took an incisive decline and handicapped the economy – oil sector carries the three quarters of Iran’s economic revenue and Iran, certainly, relies on the export of crude oil to hoist the economy. The restrictions by President Trump two years ago struck the economy on a much heavier scale, now more than ever. Resultantly, the inflation rates have increased: The International Monetary Fund (IMF) reported that the inflation rate of Iran is reaching to 35.7%. Furthermore, the Statistical Center for Iran’s (SCI) report was even more virulent, it states that the inflation rates have risen to 47.2%. In the 2019 Index of Economic Freedom, Iran ranks at 155th position globally and 13th out of 14 countries in the middle east.

Now that the US has imposed new sanctions, after the recent ongoing series of attacks between Iran and the US, the economy will immensely follow the downward path in 2020. The restrictions on other sectors include banking, mining and maritime, and that played a pivotal role in diminishing Iran’s economy. Furthermore, according to a recent report by the World Bank, the contraction for the Iranian economy in 2019 was 8.7% because of the reduction in oil and gas exports. Hence, the unemployment rates have also increased over the years which further adds up to the misery of the people.

Amid the healing process from the wounds of protests all over the country and economic suffering, the US gifted Iran a pre-election gift in the shape of an attack on General Suleimani. This gave another opportunity – President Trump’s withdrawal from the nuclear deal in 2018 being the first one – to the conservatives-hardliners, backed by Islamic Revolutionary Guard Corps, to seize the day and take votes on the grave of Suleimani, as he was a major general of that force. The conservatives could use Suleimani as the front row slogan of their campaign.

However, the mourning session was underway when Iran shot down a Ukrainian passenger plane killing 176 people, on 8th January 2020, unintentionally says PM Rouhani. A new wave of protests started, followed by the plane crash – ammunition and tear gas were fired to disperse the protesters by the government, again and brutalization within the country continued.

Along with the unrest within, the regional position of Iran is in shambles. Where many in the region were grieving after the death of Suleimani, the others were celebrating, Saudi Arabia and Israel. Given Iran’s attack on a Saudi oil facility in September 2019, Saudi Arabia’s revenge was taken, and they didn’t have to do the dirty work themselves. Before Suleimani’s death, Saudis were vulnerable due to the American troops deployed in the kingdom and were holding indirect talks with Iran, with the help of Pakistan and Iraq, to reduce tensions in the region but after the death of Iranian general, the attitude changed; the directions diverted. On the other side, there is Israel. A nuclear-armed Iran is a threat to Israel, as the Iranian influence has increased in the region especially Syria and Palestine, thanks to General Suleimani, Israel will try to sabotage Iran in any way possible. Hence, it is fair to say that Iran is confined in a room full of enemies.

Amidst all this pandemonium, there come the parliamentary elections, in which 16000 – highest so far in Iran’s history – candidates are taking part for 290 seats. Although the parliament has fewer authorities as compared to the president and the Supreme Leaders – who have the maximum power – it is critical for the 2021 presidential elections.

However, the protesters have also boycotted to vote in the elections and it is expected that this will be the lowest turnout of the history – the highest is 71% and 51% is the lowest. If we dwell into the facts and figures, whenever there’s the lowest turnout, conservatives won the majority, and the reformists were kept away from the parliament. Hence, conservatives, backed by IRGC, have two advantages: Suleimani’s death and voters boycott. Given the economic backlash, conservatives were on the back foot but the game has changed.

The same voters that boycotted the elections are the ones that do not want conservatives on the throne and if the conservatives win the majority in 21st February’s elections, a new wave of protests will rise, again. The blood bath will follow, again and it will further crumble the economy as the foreign world is unlikely to contribute if a country is under civil war.

The legitimacy of the government is damaged after the brutalization of unarmed protesters by the state. It is certain, beyond any doubt, that 2020 is going to be a tough year for Iran’s economy and politics, maybe tougher than 2019. Hence, the pandemonium is likely to stay for some time more and wherever the pandemonium stays; it displays a worldly picture of hell.

The writer can be reached at @ArsimTariq