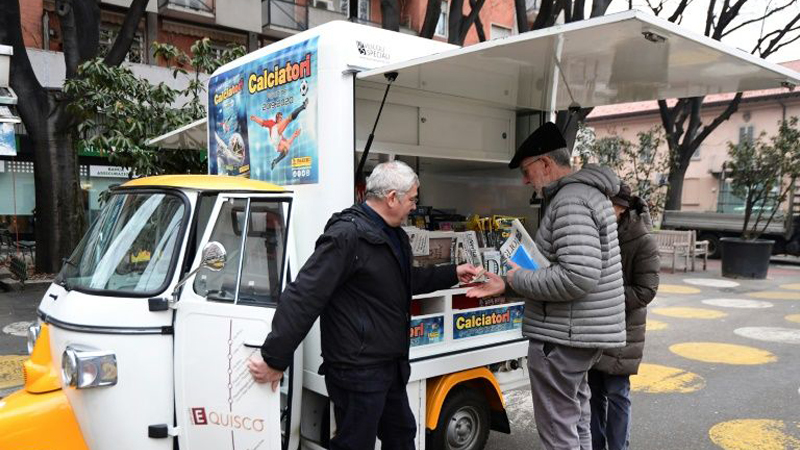 Every morning, the instantly recognisable whirr of Andrea Carbini’s three-wheeler fills this Milan square, where he throws open his mobile newsagent’s doors for a news-hungry and largely elderly clientele.

“Corriere della Sera!” “That’s two euros, have a nice day, see you tomorrow!” says Carbini, with the cheerfulness of newspaper sellers of yesteryear.

He promises a customer to put aside a newspaper, to find a certain book, he asks for news about the family.

There is so much demand that the yellow and white Ape (Bee) three-wheeled van will be late for its next rendez-vous in another nearby piazza.

“I come every day. The newspaper kiosk closed in July and fortunately the Ape has been coming for a month,” Maria Ricciardi, 77, told AFP.

“I don’t like the Internet. It may be necessary, but real culture is in books and newspapers.”

Since the local kiosk closed, “I’ve had to go for a long walk” to get a paper, notes 72-year-old Maria Malzani.

She and her typographer husband, who have always read newspapers, say the initiative is “fabulous”.

Carbini, 52, came up with the mobile newsagent’s idea to counter the disappearance of newsstands.

“Ten years ago there were still 650 in Milan, now there are only 450,” says Diego Averna of the Cisl trade union, pointing out that many are “just about surviving” thanks to the sale of public transport tickets or snacks.

The problem is national: from 2009 to 2019, Italy lost nearly a quarter of its newsagents, tumbling from 18,000 to 14,000, according to Unioncamere-Infocamere, the federation of chambers of commerce.

Simultaneously, newspaper sales are plummeting: just 2.2 million newspapers are now sold each day in Italy, down from 5.5 million in 2007, according to ADS.

Fewer sales can be blamed on the rise of digital media and a certain lack of youth interest in the press but it is “also because there is a lack of sales outlets,” said Giuseppe Ferrauto, managing director of the Cairo Editore group.

“That’s why an initiative like the mobile newsstand is something that we publishers must encourage,” he told AFP.

For now, former bookshop owner Carbini has only one route, stopping in four neighbourhoods where newspaper kiosks have recently closed.

But he dreams of expanding.

“What I’m doing is a provocation and I hope young people will take over. I shook up a situation where no one was doing anything,” Carbini says of his “Edicole Quisco”.

“People tend to think that the battle is already lost. But I think newspapers, even if a shrinking market, still have a future,” he says, stressing the importance of “safeguarding press freedom and the production of culture”.

The advantage over a normal newsstand is that the Ape avoids high overheads and has a high concentration of customers over a few hours.

Its clientele is mainly over 50 years old, but also includes some in their thirties and forties, and children, who come to buy figurines made by Panini, also a sponsor. “The Ape has an extremely important symbolic value in Italy, it represents the economic boom of the 50s and 60s,” said Carbini.