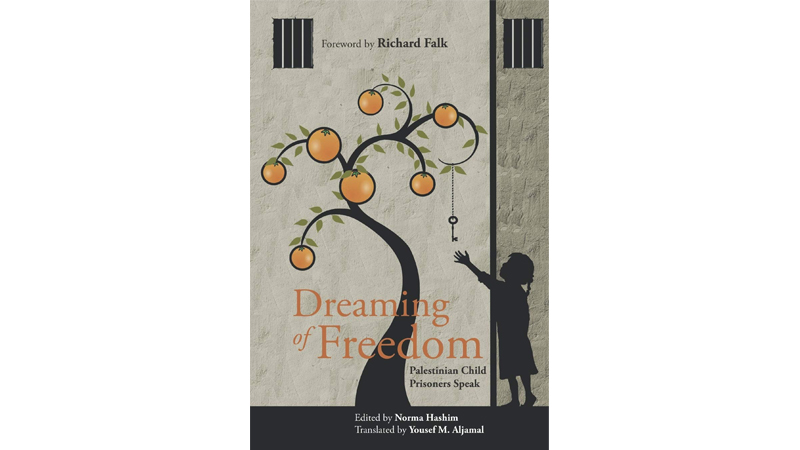 Edited by Norma Hashim and translated by Yousuf M Aljamal, the book Dreaming of Freedom, is a first-hand interviewed story of Palestinian children who spoke of the humiliation and terror of being grabbed in the dead of the night from their homes, of being tied, blindfolded, interrogated, beaten and held imprisoned for uncertain periods of time.

They express of being forced to sign confessions written in Hebrew (a language they do not know). This book (of 180 pages) is the compilations of 24 stories of Palestinian Child prisoners and it is a first person account of Palestinian children and throughout the book the author had tried to focus on the suffering of Palestinian children detained in Israeli jails. The main thrust of the book revolves round the importance of understanding the value of freedom.

The introduction of the book highlights the great trauma and tragedy faced by the Palestinian people in the form of killings, injuries, tortures, arrests, detention and daily based humiliation by the occupational forces of Israel. It further discusses the lack of commitment by the international law to safeguard the basic rights of Palestinian people. The book subsequently narrate the stories of these twenty four Palestinian child prisoners starting with the child of the Shuhada Street (Martyrs Street) who never want anyone to suffer like him due to Israeli atrocities. Following pages are wrapped with the painful, distressing and agonizing stories from the other 23 children aging between eleven and seventeen. The height of the oppression against the Palestinian children is such that a young boy (Mussallam Odeh) of 13 years old (who was interviewed for this book) was jailed 15 times. This is heart wrenching.

The book then narrates the story of a 14-year girl who says she was walking around the roses in her garden and experiencing the beauty of nature and meanwhile Israeli soldiers comes out of nowhere and arrested her even she does not know what were the charges against her. The author maintains that actually in most of the cases the Palestinian Children does not know what the allegations against them are. And this happens to this girl as well. Stepping outside the wall of West Bank, wandering into a closed military zone or raising a flag are considered crimes by the Israeli forces against the children. In most cases the Palestinian children are denied bail and held without legal representation. This speak volumes and one can imagine the intensity of state repression against the child-section of Palestine. Not only this some of the children are kept in house arrests for months together which makes them more tortured and vulnerable than those who are languishing in jails. Another story of a boy reveals that imprisonment is nothing new to them as they are subjected to thousands of violations and tortures every minute under the Israeli occupation. Palestinian Children are kept in detention centres and prison cells and are sometimes denied the food, water or not even allowed to use the toilet. Not only this, the book reveals how the Palestinian children and youngsters are tortured by electric wires, abused and humiliated in a worst manner, deprive them of sleep, spat on their faces and beaten up ruthlessly to the extant to make them confess the crimes they never did and to make them confess the names of their friends (even who never were indulged in any crime).

Tailpiece: What attracted me at the first instance was the title of the book in itself. Someone has rightly said that one will never understand someone’s pain until he/she feels it or the pain happens to him/her. Therefore, no one other than a Kashmiri can better understand the pain of these Palestinian children because of the fact that the people of Kashmir too are undergoing the state repression on a daily basis. The terms like brutality, torture, violence, occupation, resistance etc. are frequently noticeable in the book. If the book is properly contextualized, one can appositely relate the situation of Palestine with that of Kashmir where both are undergoing the tumultuous times and where the children are the victims of pellets, tortures and routine humiliation. The difference is that the brutality of Israel is already exposed before the world but the heart wrenching tragedies of Kashmiris are yet to be heard and acknowledged by the most part of the world. What Palestinian children are facing through Israeli occupation is similar what Kashmiris are facing through New Delhi’s repression. The book is a good read and every story of the interviewee takes the reader close to traumatic state of affairs and makes him realize the deep meaning of freedom vis-à-vis the ugly side of occupation.

The writer is a graduate of Aligarh Muslim University and can be reached at shahmunnes.amu@gmail.com