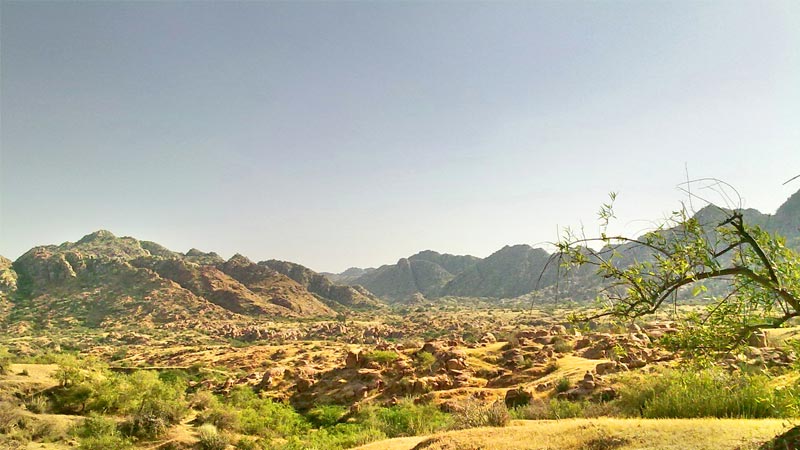 Karoonjhar, a historical mountain of Tharparkar is covered with world’s unique granite rocks as it constituted oldest rocks of earth’s crust and china clay. Karoonjhar hills are home to animals, birds and rare species, including peacocks, deer etc. It was the only source of water for humans, birds, animals in Nagarparkar. The mountain also stood as a symbol of civilization of indigenous communities and their rituals, culture, customs, traditions, folklore, songs, tales and thousands of years’ religious harmony. It is the identity of Shaheed Rooplo Kolhi, who fought British army and was hanged there.

The mountain was under threat because of illegal cutting for sale of precious stone. Human greed to extract china clay from the hilltop of Karoonjhar had already caused massive damage to the natural beauty of the region and deep ditches dug for extracting the clay.

Once covered with dense vegetation of mainly gugraal, the Karoonjhar hills have lost their beauty over the years. Deforestation of the Karoonjhar hills, which surround Nagarparkar town, threatened the very existence of critically endangered vultures. Karoonjhar is the only place in Pakistan where critically endangered long-billed vultures are found. The place is also home to white-backed vultures, which has been declared endangered by the IUCN. Deforestation is taking place in Karoonjhar hills, mainly due to collection of gugraal, which is exported for its medicinal properties. This activity has not only deprived a large area of the precious flora but has affected the habitat of vultures. A chemical is used to speed up the process of resin secretion from the plant. As the plant loses its resin, it dries up and dies. There are many herbs and plants grow in Karoonjhar, which are used in various medicines but there is no systematic protection.

In a study conducted by Karachi University few years ago, around 250 species were collected in their flowering and fruiting periods, and 62 of them were reported from Nangarparkar area for the first time. Samples of many species were taken for their proper identification. All were later preserved in the herbarium of the Plant Conservation Centre at the Karachi University.

According to study hills, sand mounds and sloping plains are home to a variety of plant species which are in abundance during the monsoon. Four seasonal springs including Achleshwar, Sardhara, Bhetiani and Gordharo flow from the hills and remain full during the rainy season. But as the season ends, they start drying, and with them, the annual plant species. The study also raises concern over the rapid disappearance of some highly productive medicinal plant species and warns that they might become extinct from the area if efforts are not made to conserve them.

The Sindh High Court has temporarily restrained the companies mining mineral resources from Karoonjhar mountains from mining activity. In a petition filed by advocate Ghulam Mustafa Hingorjo, who pleaded the case in person, the Hyderabad Circuit Bench put the respondents including the federal and provincial secretaries and companies mining the minerals on notice.

Given the significance of the Karoonjhar mountains, it must be declared as national park, as it meets the criteria for this status. This could be only sustainable way to protect hills, its trees and wildlife species, as large number of birds, reptiles and mammals were to be found in this area. With the declaration of national park, the required financial resources and safeguards could be ensured through management plan of the park. This would open the avenues for tourism and sustainable growth besides bringing all stakeholders to work closely instead of isolation.

The writer can be reached at napanhwar@gmail.com