Plastic Pollution – What is the Real Solution?

Plastic Pollution has emerged as a catastrophic problem not only in Pakistan but all over the world. Increased use of plastic has contributed to severe environmental problems with devastating effects on marine and terrestrial life.
The use of plastic substantially increased after 1965 due to its large-scale production & unique properties, therefore making it an integral part of our everyday lives. Look around yourself and you will not be amazed to find yourself in a plastic world. 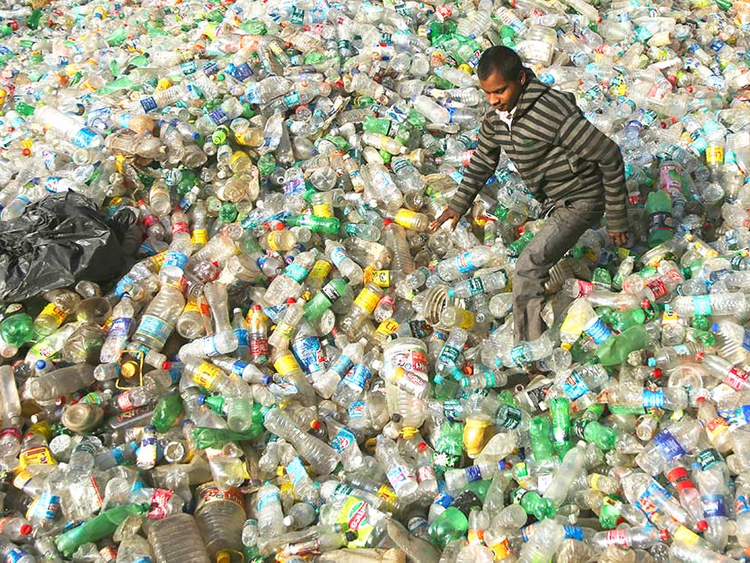 Due to high strength and impervious nature, it serves as an excellent material for carrier bags, flexible packaging and various other applications. Total consumption is about 5.5 kg per capita per annum in Pakistan. Its wide applications and properties are the reasons for its dominance in all the sectors.

Plastic Pollution
Why plastic has been the most terrible invention of the century, despite the fact that it has served as irresistible material. Plastic does not degrade and remains up to 400 years in the environment. Pakistan produces about 48 million tonnes of solid waste every year, that comprises 4.32 million tons of plastic waste only.

According to a study of WWF-Pakistan, 65% of the garbage littered at beaches of Pakistan consists of plastic waste that poses serious threats to marine life.

The number of incidents of marine animals trapped in plastic products in the sea is increasing consequently. 12 marine animal entanglement cases were reported by the Scottish Marine Animal Strandings Scheme (Smass) in 2019.

Approximately 100,000 marine mammals and 1000000 seabirds are killed by plastic pollution each year. The loss is permanent and also affecting the biodiversity of the planet; as more than 700 species are at risk of getting extinct just due to plastic.

To address the issue of plastic pollution, different countries have adopted different models and strategies. Most of the countries have opted for biodegradable plastics and materials to combat this issue.

Pakistan’s strategy to counter Plastic Pollution
Pakistan adopted Oxo-biodegradable technology as a strategy to resolve the issue of plastic pollution in 2017. Oxobiodegradble plastics completely biodegrade in the environment after their useful life without any harmful impacts on the environment. Hence, providing a solution to all the above-stated issues. The regulation was formed after careful considerations of all the alternative options & based on scientific pieces of evidence.

In 2019, another model was implemented in Islamabad Capital Territory by banning polyethylene bags and promoting biodegradable bags. The initiative was taken by the Ministry of Climate Change in light of the Prime Minister’s Clean and Green Pakistan vision. MoCC is working to ensure full implementation of the ban by strict punishments & heavy fines to the violators.

Authorities have neglected a crucial fact that polyethylene is not the only contributor to pollution in the country. Polypropylene and other single-use plastics are also major sources of plastic pollution. Non-woven PP, BOPP, CPP, Metalized films, WPP, and shrink wraps are widely used in products that are discarded in the environment after single time usage. The harmful effects caused by plastic waste accretion are drastically increasing day by day. Henceforth, their removal from the environment is very vital.

Polypropylene bags are non-biodegradable; as major commercial polymers, polyethylene and polypropylene are extremely resistant to biodegradation i.e. degradation by micro-organisms. In the current scenario; most of the suppliers are misusing the appearance of non-woven PP bags.

Non-woven polypropylene bags like fabric; however, they are purely manufactured from polypropylene-a plastic. These polypropylene bags in the market are falsely claimed as biodegradable & disintegrate into fragments to create microplastics. Microplastics become part of the food chain affecting life of thousands of terrestrial and marine animals. Due to their small size, microplastics cannot be collected and even seen by the naked eye. Hence, these bags will elevate the issue of plastic pollution instead of solving it.

Federal Authorities should devise a fair strategy to confront the issue of plastic pollution. If the decision is to ban; it should be implemented to all types including WPP, BOPP, PP non-woven bags & all single-use plastics and scientifically proven biodegradable options should be promoted.