* In an article titled Muhandra in the quarterly journal Timahi, Amrita Pritam refers to Ilyas Ghumman's stories as 'a Muhandara of today's stories from different and unique approaches' 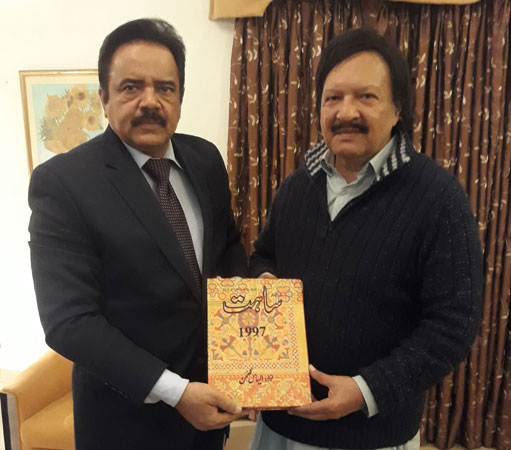 I was amazed at the volume and contents of a 722 page yearly Punjabi journal Sahet – 1997 presented to me by its editor Ilyas Ghumman the other day.

Ilyas Ghumman is an engineer with graduation in Electronics from NED Engineering College, Karachi but his passion is writing in Punjabi language and literature. He believes that Punjabi speaking persons are now settled beyond the borders of Western and Eastern Punjab. This phenomenon gets strength when one looks at the persons who take effort in collecting material for this magazine from Canada, UK and India and Pakistan. Ilyas’s passion can be judged from the fact that he learnt writing in Gurumukhi script at a very young age. He started writing in this script and his short stories started getting noticed as they reached East Punjab and beyond in no time. Notable writer to take notice of his works was none else than Amrita Preetum. Perhaps that is why the first item in the contents of this magazine is that of hers. It is a poem titled ‘Mulaqaat’ (meeting). It is an Urdu word. She could have used a Punjabi word like ‘Takra’ (encounter) or equivalent.

In an article titled Muhandra in the quarterly journal Timahi, Amrita Pritam refers to Ilyas Ghumman’s stories as “a Muhandara of today’s stories from different and unique approaches”. His story ‘Pind Di Lajj’ (honour of the village) refers to centuries’ old hackneyed customs and false sense of veneration. The story is about groom’s procession going to an adjoining village to marry and bring the bride. The opponents try to disturb the procession. They destroy the cooked food by eating the meat from the cauldrons, large utensils and throwing away the curry in the fields. They shout the slogans that where ever they went they trample the turbans of the opponents; a ‘muhandara’ in which everyone is looking for one’s identity. A servant namely Nihala of the lowest cast who was brought up on the leftovers of the landlords comes to rescue to save the respect of his owners. Ha manages to fill all the utensils with food, a miracle by Nihala. Ghumman according to Amrita Preetuum has the knack of saying the story with metaphors.

WHY A PUNJABI WRITER? — Ilyas was born in a village namely Satya in between Wazirabad and Gujranwala. He inherited literary atmosphere from his father Sardar Khan Ghumman, maternal grandfather Chaudhry Jalal Din, a close companion of Maulana Zafar Ali Khan. Ilyas opened his eyes in an environment where Heer Warris Shah, poetry of Baba Farid Shakarganj, Bulleh Shah, Shah Hussain and Mian Muhammad Bukhsh was read and recited in abundance. His elder brother Sarwar Ghumman through professionally a doctor was an ardent admirer of Punjabi literature. He was a Punjabi nationalist by birth. Ilyas considers him his mentor under whose guidance Ilyas compiled the collection of Punjabi proverbs and phrases. Ilyas’s uncle namely Chaudhry Ghulam Nabi was a leader of Punjab Mazdoor Kissaan Party and a friend of Party Leader Major Ishaque. As a Ravian he got under influence of Professor Munir Lahore, Head of Punjabi department. This milieu was very congenial for Ilyas to start writing in Punjabi. Ironically when he got admission in Daud College of Engineering & Technology in Karachi, he saw a slogan on a wall in saying ‘Ranjeet Singh Kaane Ki Aulad Kei Liye Yehan Koi Jagah Nahi’ {there is no place her for the children of Ranjeet Singh Kanna’. He got emotional that he was being made Punjabi by force. In reaction, he decided to develop a better understanding of Punjabi language and literature. He started writing in Punjabi. He was unhappy that at that time, may be one literary book used to be published in Punjabi every two years and that too with ugly get up. He continued knitting his stories ended up in writing and publishing 27 books to-date with national and international recognition.

Ilyas was born in a village namely Satya in between Wazirabad and Gujranwala. He inherited literary atmosphere from his father Sardar Khan Ghumman, maternal grandfather Chaudhry Jalal Din, a close companion of Maulana Zafar Ali Khan. Ilyas opened his eyes in an environment where Heer Ranjha of Waris Shah, poetry of Baba Farid Shakarganj, Bulleh Shah, Shah Hussain and Mian Muhammad Bukhsh was read and recited in abundance

Apart from being editor of Saher, Karachi, Sohni Dharti, Karachi, Monthly Ravail, Lahore, Monthly Meetee, and Yearly Sahet, he wrote science books in Punjabi. These are Radar 1990, Science 1992, Hisab Kitab 1994, Chemistry 1998, Biology 1999, Hisaab (mathematics) 2000, Electronics 2000 and Computer 2001. In this way Ilyas transformed his command on Punjabi language to write basic subjects in Punjabi language. After retirement from Wapda he plans to work full time for Punjabi language to get its due place in education sector.

Ilyas Ghumman’s stories have fragrance of our soil. In a story titled ‘sweets to half Peer’ translated by Risham Jameel Paul, he describes the sacrifices of a mother in raising her son in the city of Lahore, cooing meals for him and cutting her expenses from going to Data Darbar Shrine. Then she started giving money at another Peer’s shrine. ‘She told me about that imaginary Peer’s quality that if you one rupee in that Darwaish’s way, you have to spend half of it in God’s way. Instead of spending two rupees in different shrines, she used to distribute sweets of a penny among children living in the street” disclosed her son.

Struggle as an Activist:

In order to appreciate the role of Ilyas Ghumman as an activist of Punjabi literature, I shall refer to the impressions of great Pakistani writer Fakhar Zaman published in the journal ‘Timahi’ published from Bahwalnagar – Ilyas Ghumman Number. He refers to his telephonic conversation with Amrita Preetum who suggested him to read Ghuman’s latest story ‘Jaandian Rut Diyan Maiyaan’ published in ‘Nag Munni’ in India. Fakhar Zaman finds Ghumman as a creative person whose stories have a strong link with Punjab’s soil. He has strong link with Punjabi culture. His stories emit his strong practice, technique, outstanding diction, and modern approach while knitting his stories. One finds a lot while reading in between the lines.

He is well organized while working for the growth of Punjabi language and literature. In no time he developed an element of respect in the hearts of not only Pakistani Punjabis but also Punjabis in India, Europe, Canada and America. No other Punjabi writer matches the acknowledgment what he has received abroad. Generally speaking his collection of stories ‘Pind Di Lajj’ is enough to substantiate this impression.

Despite his over busy schedule, Ghumman has organized and participated in processions, Conferences, for the promotion of Punjabi cause. In his campaign, he acknowledges the contributions of his consultants and supporters; M. Masud Khaddarposh Punjabi scholar, Hamid Khwaja Painter, Rana Muhammad Tahir President of Punjabi Students Association DCET, Karachi. In Punjab, during his pro-Punjabi activities he acknowledges the support of Sibtul Hassan Zaigham, Muhammad Asif Khan, Shafqat Tanvir Mirza, Raja Rasaaloo, Syed Akhtar Hussain, Najam Hussain Syed, Fakhar Zaman and Ghulam Musrafa Bismil.

All Punjabi lovers await implementation of Supreme Court’s decision to make Punjabi language as part and parcel at primary level syllabus by the provincial government! He expects the younger generation to take up issue with gusto like he and alike did from their senior generation!