* Historically, Shikarpur was recognised as one of the most important regions for trade because of its strategic location in the subcontinent 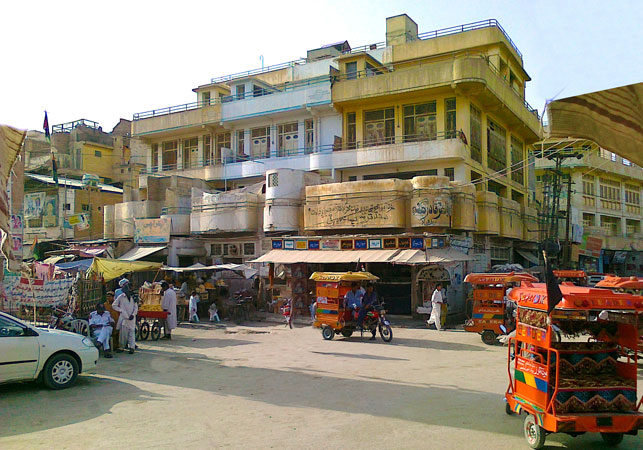 Sindh is also known as the Land of Sufis. It is counted in one of the most ancient civilisations. Its cities have engraved the histories on their walls. Sindh is full of many historical cities and each one of them has unique patterns of history. Some cities are known as the oldest cities in Sindh such as Larkana, Khairpur, Jacobabad, Hyderabad and Shikarpur.

The historical city of Shikarpur is located in lower Sindh, 29 kilometers west of Indus. The city is counted among the oldest and historical cities of Sindh. it has the oldest and cultural heritage monuments, hospitals, colleges, schools, and markets. It has one of the distinguished markets in Asia. The market of Shikarpur which is known as the “Dhuk Bazar” was famous around Asia. Moreover, The Dhuk Bazar(Covered Bazar) is a narrow street with shops on both sides and the roof covered with fine woodwork.

Historically, Shikarpur was recognised as one of the most important regions for trade because of its strategic location in the subcontinent. People from far places including Afghanistan, Burma, Geneva, Japan, Rome, Honolulu, and other countries used to do trade and travel. The trade was consist of cotton, metal, gold, embroidery, and carpets and other many things. It was the center of trade during the 17th century.

Trade was much simpler because of the city’s perfect location and was accessible to the people of Central Asia.

The trade was much increased during the dynasty of Kalhoras.

Shikarpur was ruled by Kalhoras and was founded by “Daud potas”. But Some historians claim that it was founded by the vanquisher of the Shakas “the Scythians”. There is a small controversy between historians over the region.

However, if one visits the shikarpur, he will find the people very generous and hospitable. People in the city work in numerous private and Government jobs. Shikrapur comprises a number of villages such as Karan sharif, Janno, sultan kot, jagar, and khanpur and many others. The dwellers of the villagers earn their living by cultivating various crops such as cotton, Puedes, Wheat, and Peas. etc. Except for those villages, Shikarpur has four talukas; Khanpur, Garhi Yaseen, Laki, and Shikarpur. Which made up the population of Sindh.

According to the census of 2017, the population of Shikarpur was 195,437. The major population is of Sunni and the minor is the Shia community. It is consists of many casts such as Sindhis in majority and brahvi and Urdu speaking in minority. There is also a small Hindu community. Due to the broad region and population. Shikarpur has given birth to many well-known personalities including poets, writers, and politicians.

One of the prominent personalities of Shikarpur is Shaikh Ayaz who is known for his tremendous Sindhi poetry. Saami is a great poet from Shikarpur. Many intellectual politicians also belong to Shikarpur. Allah Bux Soomro also hailed from Shikarpur, who was the first chief minister of Sindh before the partition of the Sub-continent. The Well-known politician, lawyer and author A.K Brohi (Allah Bukhsh Karim Bukhsh) belonged to Shikarpur. He also worked as a Minister of Law and Justice in the 1970s in General Zia-ul-Haq’s administration.

On the other hand, Shikarpur is notable around the country for her delightful foods. The mouth-watering Achar(Pickle) is well known for its spicy taste. And the sweet cold Kulfi Falooda of the Deevan Hotel located at the laki dar, which attracts the people from far places.

However, Shikarpur has been perceived as the “little Paris” of Sindh. Because of its countless monuments and historical forts. Shikarpur was constructed inside a fort and has seven gates and one window to guard the city. It consists of seven gates and one window named Lakhi-dar, Hathi-dar, Hazari-dar, Khanpur-dar, Civi-dar, Karan-dar, Naushero-dar, Wagono-dar, and Siddiqui Mari (Window). Those used to close at 8 pm. Despite monuments, there were parks for the amusement of the people.

Shikarpur has some eye-catching parks. The famous park is Shahi Bagh (Royal garden) which was built in 1871. It had hundreds of numerous flowers. If one enters the shahi bagh he can find a large green wooden pavilion standing tall in the center of the Shahi Bagh. It was designed by Perston Phel and was constructed by Sir W. Merewether. With a stunning garden and pavilion, it had also a zoo. The zoo had various species of animals such as cheetahs, lions, wild boars, bears, and other animals. But unfortunately, those later moved to the Karachi zoo.

Shikarpur has made a place among the historical sites of the world because of its monuments and other heart warning places. The monuments of shikarpur had got the attention of all over the world. It’s bungalows with bath tanks, monumental buildings which are a fine example of the glorious armature and other buildings constructed with the classical archaeological layout. The wooden Pavillion in Shahi Bagh (royal garden) is an impressive model of archaeological professionally.

Another archaeological edifice is C&S (Chella Singh & Sital Das Government Degree College) which was built on 17 July 1933. It was named C&S after two bankers of Shikarpur. The one was Seth Sitaldas, who donated RS. 1, 00000/ and other was Seth Chellasingh who donated RS.78, 000/ for the construction of the college. The college was inaugurated by the governor of Bombay before the partition of the Sub-Continent. At that time the number of graduates in Sindh was 77and 70 were from C&S Degree college Shikarpur.

Shikarpur has its own recognition throughout the world. The city was added in the world monument watch list 2008, 2010 and 2014. The historical buildings we’re protected by Sindh cultural heritage. According to the Sindh government, more than 1200 buildings are present in the Shikarpur. There are few people who are struggling to save historical sites. One of them is; Dr. Anila Naeem. According to her while addressing a seminar, UNESCO had confirmed 1,203 buildings in Shikarpur as cultural heritage. she is an academic researcher and professional in “Architectural Heritage”‘ and “Area Conservation”. She is currently working on a campaign named “Shikarpur Heritage Safeguarding Campaign” to protect its historical monuments.

Unfortunately, the title of Little Paris of Sindh has been taken away from Shikarpur. Many historical buildings have been demolished or the design has been completely changed by the residents. Shikarpur as being a historical site, everyone should make some struggle to protect the fading history. There’s also no adequate funding to protect those historical sites. I appeal to the Sindh government to wake up and pay heed to this remarkable city.

Shikarpur is small city and the capital of Shikarpur District in Sindh province of Pakistan. It is situated about 29 km west of the right bank of the Indus, with a railway station, 37 km north-west of Sukkur. According to the 2017 Census of Pakistan, its population is 517,400.