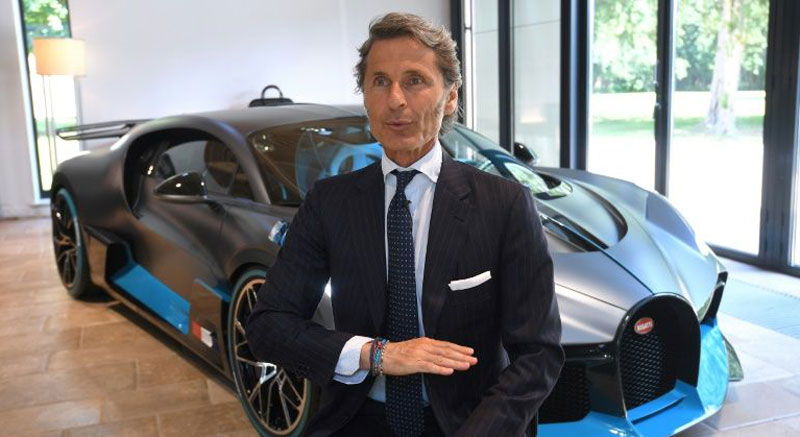 Supercar manufacturer Bugatti, fresh off one of its best years, wants the world to know it has taken environmental concerns to heart even as it prepares a next generation of heart-pounding — and gas-guzzling — speed machines.

The French automaker has implemented a series of measures to offset the carbon emitted by the 81 racers it produced last year, including a shift to biogas and other green energy sources to power its manufacturing facilities in northeast France.

But will Bugatti, which has hinted at “surprises” this year, be joining other luxury carmakers in shifting to electric or hybrid models?

The short answer: Not right now.

“For the next 10 years to come, only the W16 motor provides the emotion and the passion expected by our supercar clients,” Stephan Winkelmann, the firm’s chief executive, said recently in reference to its massive 16-cylinder engine.

Nonetheless, the Volkswagen-owned brand believes it can offset its own greenhouse gas emissions as well as those of its clients, a challenge admittedly made easier by its limited production runs.

Fewer than 700 Bugattis are in circulation worldwide, and on average they are driven just 1,200 kilometres (750 miles) a year.

That’s probably because the average Bugatti owner has a collection of 42 cars to choose from, the brand says.

“In 2018, that represented the equivalent of 1,380 tonnes of carbon dioxide emitted by Bugatti and its clients,” the firm’s managing director Christophe Piochon told journalists this week.

The firm has employed a full-time environmental coordinator since 2016 to oversee a range of carbon-offset efforts, including buying up parcels of the Amazon rainforest to prevent them from being cleared by loggers or farmers.

It has also planted 4,000 trees to help forests in its native Alsace region recover from a devastating infestation of bark beetles in recent years. “Bugatti is a highly visible brand, so it’s important for us to take these steps and set an example for the industry,” Winkelmann said.

While big business has jumped on the tree-planting bandwagon, the science underpinning it is under question, and such offset schemes have been derided as greenwashing that allows them to continue pumping CO2 into the atmosphere.

The car industry has come in for particular criticism as it is estimated to account for nine percent of total annual greenhouse gas emissions, with a recent Greenpeace report accusing it of trying to delay fundamental change towards zero-emission cars while raking in money with highly-polluting vehicles like SUVs.

While the typical Bugatti buyer is no eco-warrior, “lots of them donate to environmental causes, even though most people might not know it,” said Tim Bravo, the firm’s head of communications.

Green concerns certainly aren’t weighing on its business yet.

“2019 was an excellent year for Bugatti, the best since 1998 in terms of revenue, deliveries and earnings,” Winkelmann said.

Bugatti buyers — a Chiron sells for 2.5 million euros ($2.8 million) before taxes while the Divo speedster goes for a cool 5 million euros — are shelling out for performance as well as luxury.

Bugatti does not reveal the names of its buyers, though some have shown off their prizes on social media, such as football stars Cristiano Ronaldo or Karim Benzema, or the American boxing champion-turned-promoter Floyd Mayweather.