Snowfall in Gilgit-Baltistan to continue till Monday: met report 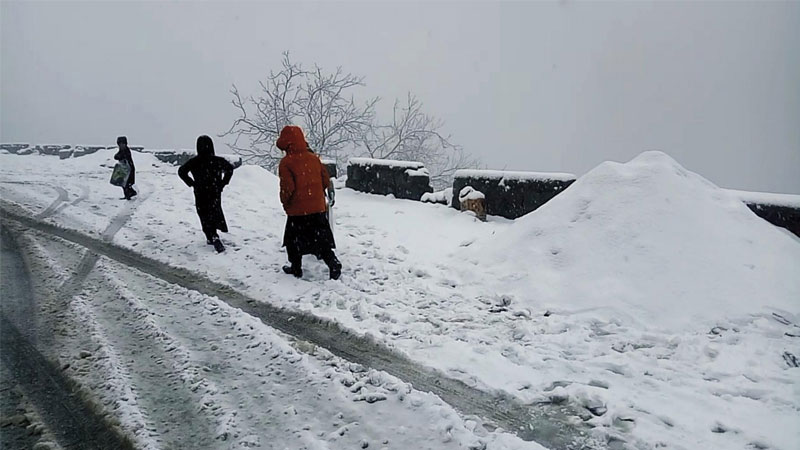 Fresh spell of rain and snowfall in Gilgit-Baltistan is expected to continue till Monday. According to Pakistan Meteorological Department, Snowfall recorded in Skardu, Astore, Kalam, Bagrote and Gupis during past 24 hours. The lowest minimum temperature in Pakistan reported in Skardu on Saturday with minus 20°Celsius, According to reports, in upper areas of Gilgit Baltistan minimum temperature has dropped to as low as minus 25 Celsius. The people have been restricted to homes due to fresh spell of snowfall. Gilgit-Skardu road has also been blocked due to land sliding. The passengers stranded at the road have been rescued by the military troops and transported by helicopters. Transport service in Baltistan has came to standstill owing to snowfall. Moreover, cold and dry weather is expected in most parts of the country today(Sunday). However, cloudy weather with light rain and snowfall over mountain is expected at isolated places in upper Khyber Pakthunkhwa, northern Balochistan, Gilgit Baltistan, Islamabad, Kashmir and its adjoining hilly areas. Weather remained cold and dry in most parts of the country, while very cold in northern areas. However, rain occurred at isolated places in Quetta, Kalat, Dalbandin, Ziarat, Chaman, Kalam, Mirkhani, Chitral, Bhakkar and Gilgit-Baltistan. Lowest minimum temperatures recorded at Skardu -20°Celsius, Astore -12°C, Parachinar, Bagrote, Gupis -11°C, Hunza -07°C, Kalam-06°C and Rawalakot -04°Celsius.