Karo Kari — The murder of honour in Sindh

Honor killing is a cultural reality in Pakistan as according to the UN about more than 1,000 women are killed in Pakistan every year in the name of honor. These are the cases that are reported whereas thousands go unregistered and unnoticed. Karo Kari or honor killing mostly occurs in rural areas of Sindh, where mostly tribal traditions govern. Sadly, Sindh province is on the top of the list in Pakistan with more honor death cases. This Karo Kari is primarily committed against women who are thought to have committed dishonor to their family by engaging in illicit pre-marital or extra-marital relations. In order to restore this honour, a male family member kills the female in question. However, investigations into the majority of such cases remain inconclusive bringing no one to justice but has allowed the acquittal of a few suspects. 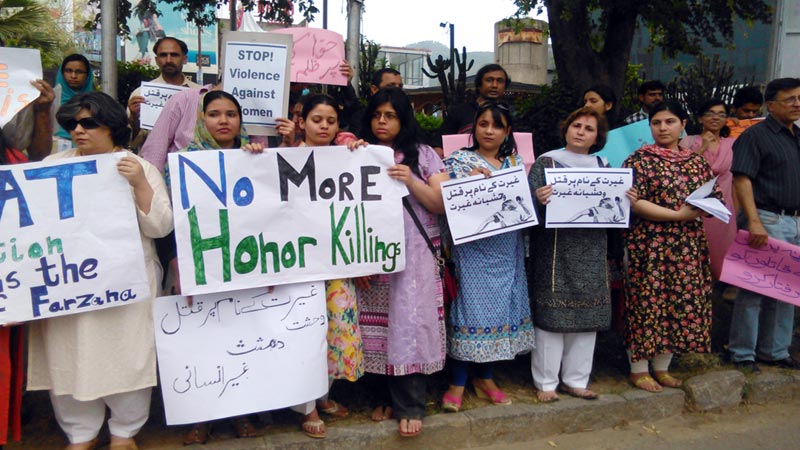 As per a report published by a human rights organization, 139 men and women became the victims of the tradition of Karo Kari in Sindh in 2019, while unreported cases were also big in number in Sindh. In Jacobabad, 32 people were killed, 22 women and 10 men. Shikarpur district stood second, where a total number of 25 cases was reported, and nearly 19 women and six men were brutally murdered. In Kashmore district, 20 women and three men were killed, while 11 women in Sukkur district and one male and seven women in Ghotki district were killed for honour.

The first month of 2020 has just claimed eight people are killed under the guise of the odious ‘Karo Kari’ crime in Sindh. Ghulam-ud-din Golo gunned down his sister Anela, suspecting her of having illicit relations wat village Jewan Golo in Bakhshapur. In another incident, Karam Ali allegedly shot dead his wife Reshma after declaring her Kari in the village Hazaro Sheikh in Karampur. Ubaid Mahar shot dead his wife Rukhsana Sheikh in Mirpur Mathelo. Haji Mir Muhammad, father of the deceased, told the police that his son-in-law shot dead his daughter after allegedly declaring her Kari.Ghulam Ali allegedly poisoned to death his wife Tania Khaskheli over Karo Kari allegation in Halla. Muhammad Bakhsh allegedly shot dead his wife Dur-e-Naz and Ali Dost Chandio over Karo Kari in the village Ali Nawaz Khokhar in Kubo Saeed Khan. In another incident, Muhammad Khan Marfani shot dead his wife Hazoora Khatoon in Shikarpur. The start of this year is not good. Sindh government is keeping mum on this particular issue.

What I have felt while living in Interior Sindh is that most of the families and villages see honour a personal issue and do not take kindly to state intervention, which adds to this problem. The Wadera (feudal) system is the main cause of this issue to streamline. These feudal’s don’t want the villagers to go to the police or other law enforcement departments. If anyone tries to come out from their influence then they charge them with a heavy penalty. It is in their interest to keep the people backward, uneducated, and economically dependent; to rule them through official government machinery and private bandits. Due to the massive power base of the ‘feudal,’ no one dare raise his/her voice against the landlord for fear of being socially excluded, economically crippled or facing terror. The existing undistributed feudal power and cruel exercise of that power by feudal lords is a major factor that supports honor-related crimes.

Ghotki, Jacobabad, Kashmore, Khairpur, Nausheroferoz and Dadu districts are governed by feudal, tribal and patriarchal values. The customs, traditions and practices are often an expression of these values; women are treated as objects, used for one’s own purpose such as provided as compensation to enemy to settle disputes, sold, bought, exchanged, damaged and killed.

I remember one case of a young female Rimsha who was killed at Khairpur Mirs by few feudal lords. She was hit by nine bullets using a 9mm weapon in the name of honour. Nothing has been done concrete on this issue rather false claims by the local elected representatives.

Saira Ahmed, a social activist, believes that apart from the flaw in the probe and the attitude of the families concerned, the police’s approach towards the ‘honour killing’ cases and overall criminal justice system need reforms. Sindh need greater reforms in the laws and bringing the culprits to justice instead of blaming the culture for the brutal trend.

However, on the other side the state is bound to protect that lives and property of all individual Pakistani citizens, no matter what related parties might say about the incident. This problematic mindset must also change if we are to eliminate the menace of honour killing within society. Tribes and families cannot see their heads as a replacement for judges and are not authorized to exercise judgement or pass sentences according to their own interpretations of various traditions, completely ignoring the law in the process”.

I believe that the laws have been made to prevent such barbaric practices, but as a next step, the police must be forced to investigate cases of honour killing and unauthorized tribal justice with due diligence; failing which a penalty should be imposed, as this is the only way to force the police to carry out its responsibilities. Alongside this, the state must also look to spread awareness regarding what the law says on this issue. These are long-term processes that will take time in ridding the country from the menace of honor killing, but the longer the state puts this off, the more likely are we to see further cases of honor killing in the future.

The writer is a social and political activist based in Lahore. He has done MPhil in Communication Studies