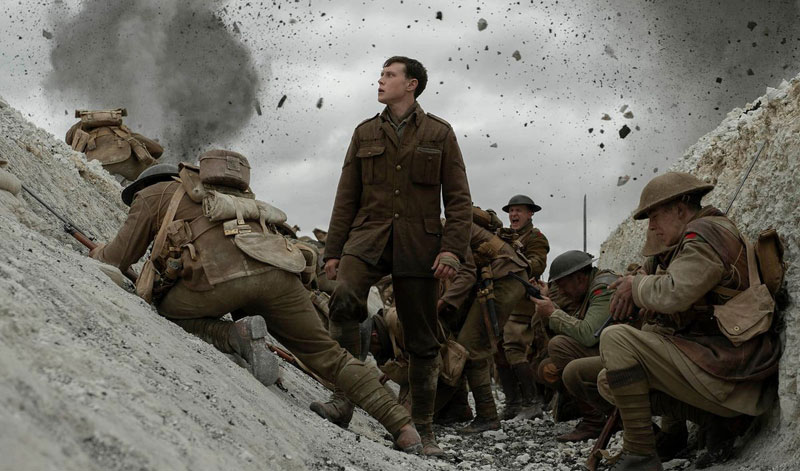 Director and producer Sam Mendes‘s ‘1917’ war film is based on two young British soldiers, Tom Blake and Will Schofiled, during World War I who are given a mission by General Erinmore to deliver a warning to Colonel Mackenzie of an ambush during skirmish, soon after German retreat to the Hindenburg Line during Operation Alberich in 1917.

The Germans are not in retreat but have made a tactical withdrawal to their new Hindenburg Line, where they are waiting to overwhelm the attacking British with artillery. If the duo fails, it would be a massacre; over 1600 men could lose their lives.

The film was made to be look with one continuous take, a technique first used by Alfred Hitchcock in his psychological crime thriller ‘Rope.’ Director Bella Tarr in his art drama film ‘Satantango’ also used the same technique with long takes and continuous movement of camera avoiding the one shot. But this long takes and one shot movement of camera was accomplished by the two times Academy winning director Alejandro Gonzalez Inarritu and three times Academy winning cinematographer Emmanuel Lubezki in their Best Picture winner Birdman.

The cinematographer chosen for 1917 was none other than Roger Deakins, who has received 15 nominations, winning once from Blade Runner 2049. It is Roger Deakins 4th collaboration with Sam mendes, other three were Skyfall (2012), Revolutionary Road (2008) and biographical war drama Jarhead(2005). Roger Deakins is famously known for The Shawshank Redemption(1994), A Beautiful Mind(2001), The Reader(2008), No Country for Old Men (2007), Prisoners (2013) naming few. He is also known for his work with Coen brothers and Denis Vileneuve. The use of single shot was brilliant as it brings the viewer along the barbed wires, debris of war, dead bodies, and dead horses and flies buzzing on them. Cinematography is riveting to the eyes and is surely a second Oscar win for Deakins. 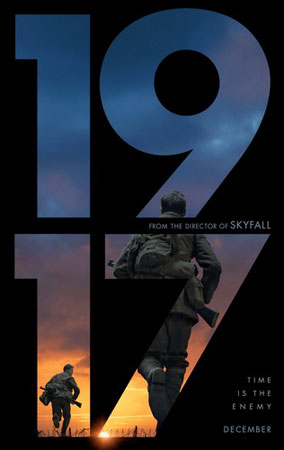 1917 is WW-l battlefield the subject which hasn’t been covered in long time but it lacks emotions that we have witnessed in Saving Private Ryan (1998), Schindler List (1993) and The Pianist (2002). Acting wasn’t as good as in mentioned movies- in these movies actor drew you in with their performances to feel the emotion, horror and starvation -especially the opening battle scene in Saving Private Ryan, and pogrom done by Nazis in Schindler List and hunger and horror in The Pianist.

The set feels very much like a breath of air back, thanks to Stanley Kubrick’s Paths of Glory (1957) whose ornate chambers of the generals oversaw the debris and waste of those lives. Locations and soldiers are bombed into pieces, and the layouts justify the madness era of blood bath and with enticing and powerful influence of background music the senses of gritty war gives goose-bumps.

There were some flaws in 1917, when Blake and Schofield were in bunker where they were tripped by a rat and explosion erupts. Explosion was so significant it forces the entire large bunker to collapse but those soldiers just walk out without any scratch. Further when Schofield was chased by two German soldiers in a desolated town, they both were unable to shot him with their rifles and he was only 20 yards away in the straight lane. And who just drops the gun, which is barely a hope for survival, in the war? Some scenes must have been avoided. But above all it’s an endeavouring movie with no slow and boring parts; audience is enthralled with the journey from the first minute, it has brilliant cinematic night bombardment shots. 1917 doesn’t glorify war only but demonstrates valiantly the vulnerabilities and fear that a person could feel in these situations, especially the horrifying scene of Schofield when his hand found the hole in chest of dead body. 1917 renders much of a survival movie like Christopher Nolan’s Dunkirk (2017).

1917 is a massive technical achievement. The Camera tracks this pair with smooth good looking one continuous shot for 110min. Despite its not exactly one shot but it tricks the audience. Kudos to the Editor Lee Smith, who had bridge those scenes in order to make this look like a single fluid shot. From the Cinematography to direction, score and editing it absolutely a top notch war film. People on social media who are taking lightly and making jokes and memes about World War-III after recent conflicts between Iran and America should watch this distressing film and get an insight of how terrible and horrendous war can be. War is not a joke, it destroys and plunders everything. Soldiers who are affected by war in aftermath are haunted by the painful shrieks of their friends and hallucination of bombardment chased them till eternity.

Philosopher Plato writes, “Only dead have seen the end of war.”