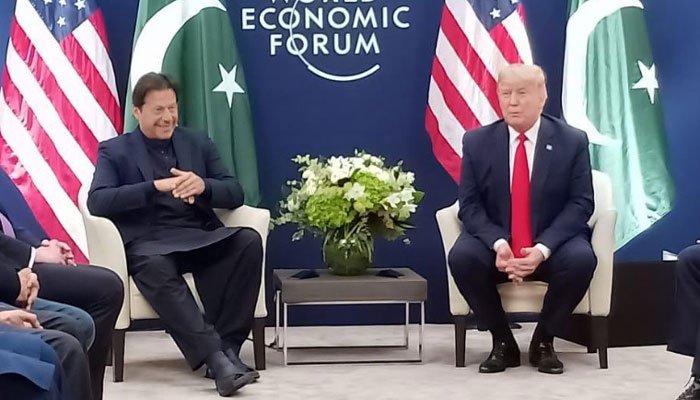 “US President Donald Trump has assured us that he will soon visit Pakistan,” the foreign minister said in a statement issued hours after a meeting between Prime Minister Imran Khan and the US President on the sidelines of the WEF.

The foreign minister is among the members of prime minister Imran Khan’s delegation during the visit.

The foreign minister said during the meeting, Pakistan raised the issue of Financial Action Task Force (FATF) and the prime minister informed president Trump over the steps taken by Pakistan in this regard.

Earlier, US President Trump again offered to play the role of a mediator between Pakistan and India on the matter of Kashmir and said the US is keeping a “close watch” on the matter.

“What’s going on between Pakistan and India … if we can help, we certainly will be willing to. We have been watching it very closely and it’s an honour to be here with my friend,” he added.

The prime minister said that the US and Pakistan were on the same page as far as talks between the Taliban and the Afghan government were concerned.

He said Pakistan’s issue with India was also an important one.”We hope the US will play its part in solving [tensions] because no other country can,” said Prime Minister Imran.

He said it was always hoped the US would take part in resolving the issue, “because no other country can”. Imran is one of at least three leaders Trump is scheduled to meet at Davos. The others include European Commission President Ursula von der Leyen and Iraqi President Barham Salih.

The US president avoided responding concretely to a question by a reporter whether he would “also visit Pakistan” when he makes a trip to India, instead saying, “Well, we are meeting right now. I wanted to say hello.”

Trump said that from a relationship standpoint, the US and Pakistan “are getting along very well.” “We have never been closer with Pakistan than we are right now.”

The meeting comes against the backdrop of Foreign Minister Shah Mahmood Qureshi’s trip to the United States, where he met with his counterpart to defuse regional tensions.