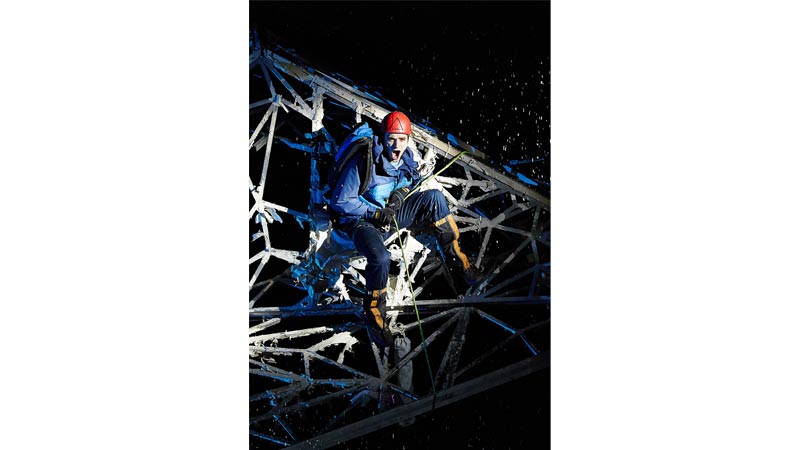 You may have heard that anything is possible in theatre in as far as the audience is willing to indulge in the fantasy you want them chase.

But you have to showcase a convincing fantasy; it has to be a gripping, thrilling, and exciting to seduce the senses of the audience to stick to the story start to end. I have seen strange things happen on stage-so much so I have seen a mouse king lead the attack with his army of rats in a girl’s dream-but it has to be convincing.

“Touching the Void” stretches the limits of what can be done in theatre to the extent that it made me wonder if there are limits to a theatrical production. In the silence of Duke of York’s Theatre, you could sense the audience rooting and cheering for Joe Simpson that Josh Williams performs impeccably to safely reach the base camp and not to give up. It almost felt that Sarah, Simpson’s sister, was voicing the desires of the audience when he was hallucinating in his descent in pain. Mind plays strange games when it is put through pain of this magnitude and it comes to the fore by virtue of a dialogue between the brother and sister.

The story is based on Simpson’s climb on the west face of Siula Grande situated in Peruvian Andes with his partner Simon Yates. On their way down, Yates as played by Angus Yellowlees had to cut the rope when Simpson fell into the crevasse in the darkness of the night.

The story is based on Simpson’s climb on the west face of Siula Grande situated in Peruvian Andes with his partner Simon Yates. On their way down, Yates as played by Angus Yellowlees had to cut the rope when Simpson fell into the crevasse in the darkness of the night

While walking to the theatre, I constantly asked myself: “How on earth will they showcase a mountain range, forget about climbing it?” Ti Green overcomes the challenge by creatively using chairs attached to the wall to depict a snowscape that the two mountaineers audaciously climbed from the stalls to the upper circle in pursuit to lure the audience. If the audience is on your side, a mere climb will create the image of ascending a mountain range. The set designer does another impeccable job of creating a labyrinthine iron set that evokes a sense of the mountain range that the two climbers embarked on reaching the pinnacle of taking a route that no one had ever pursued before.

You can have the best of sets in the world, but you need good actors who can visibly convince the audience of a difficult climb. Simpson’s character posed an additional difficulty, because when he fell through the void, his leg broke and in that he had to reach the basecamp trying to overcome all trials and tribulation along the way and in that he also had to battle his fears, which Williams acted out like a pro. He was sweating and looked visibly in paid as if he was really in Simpson’s shoes. It was flawlessly to the extent that the two ladies sitting close to me sighed is relief and said “this was the longest three hours of my life”-that is how engrossed they were.

Touching the Void is an exhilarating watch based on the Simpson’s tale that he narrated after recovering from his injuries and a must watch.