The curious case of a military boot 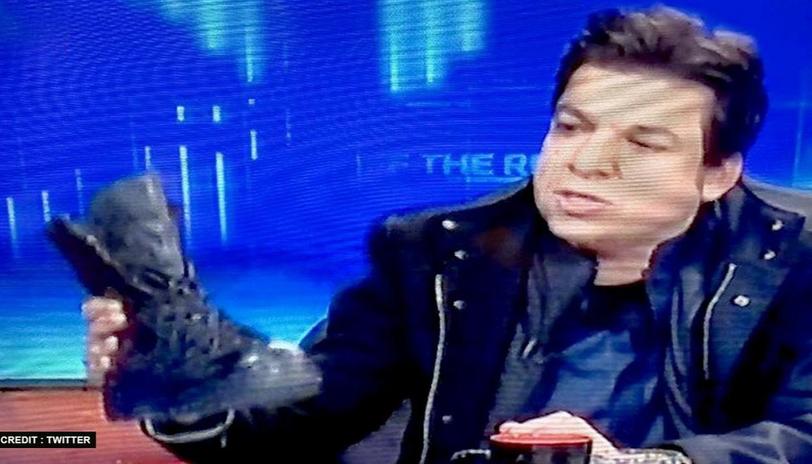 Pakistan Electronic Media Regulatory Authority (PEMRA) has banned Off the Record for 60 days which is a violation of freedom of the press.

According to the article The 5 Principles of Ethical Journalism on the website Ethical Journalism Network, independence is a core value that precedents while conducting reporting as Abbasi did not during the show affiliate himself with any political party. Vawda has carried out a freedom of speech and given his argument on live television which in any way should not directly co-relate with Abbasi’s right to air his show.

PEMRA has been unfair in conducting a ban on Off the Record. Vawda seems relentless, ignorant and shows no remorse on giving his perspective, there should be action taken on Vawda rather than killing Abbasi’s air time on ARY. Abbasi did allow the boot to keep sitting on the table and did not give any firm reaction to Vawda to remove it as it goes against the rules of basic ethics of behaving in public yet Abbasi still reserves the right to air his show as it violates free expression. The standards of maneuvering a show have gravely fallen due to Vawda’s behaviour.

According to “About the press and other media” in Law of the Republic of Latvia on the website Likumi, there shall be no interference with the media and it has the right to information from the state and public organizations. In any way, the show has not broken any laws or showcased prohibited material to the public which is one of the clauses for the termination in Latvia.

By showcasing a military boot, Vawda has politicized the forces. PPP leader Sherry Rehman disapproved of Vawda’s behaviour. “This can’t be normalised, no matter what the point of the parody,” she said on Twitter. “Disappointed and disgusted that public discourse has sunk to this level. It is everyone’s right to critique another’s actions but, this plumbs new depths. Cheap thrills just got a whole lot cheaper”.

With Sherry Rehman’s statement, it is evident that Vawda did cross a line of procuring misdemeanor on a public platform. By appearing on Capital Talk on Geo TV, Vawda shows further obstinate conduct by responding to his stunt as a question that was yet to be answered by the spokesmen of PML-N and PPP.

Abbasi has been on the wrong side of the punishment which should be reevaluated. Vawda should not be allowed to make TV show appearances until he apologizes to the audience on his propitious performance. Free expression is underrated in Pakistan and censorship is quite common. By not succumbing to self-censorship, Abbasi has taken a stand in letting the guest speak or do as they please. PEMRA has not taken a wise decision as this further complicates the relationship of journalism with censorship.