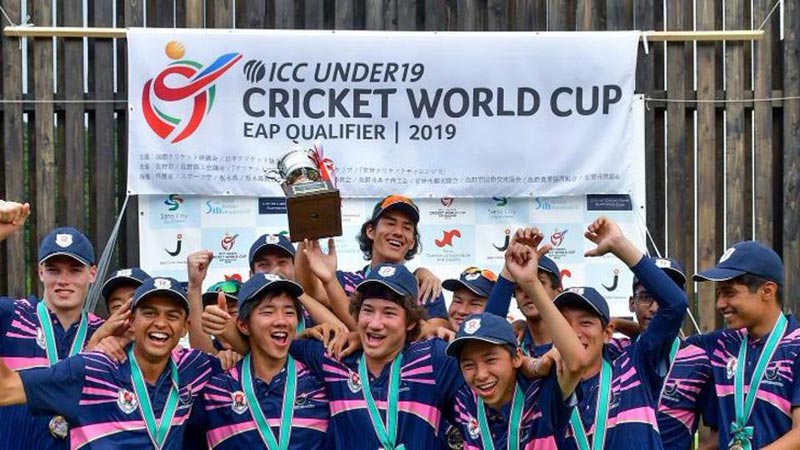 TOKYO: Cricket is barely on the radar in Japan, where baseball, soccer and sumo wrestling dominate the sporting landscape, but all that could be about to change after its under-19 (U-19) team qualified for the World Cup in South Africa. It is early days yet, of course, with the Japanese Cricket Association (JCA) founded in 1984 and made an ICC member only in 1995. The U-19 side was founded in 2017 and took part in 2019’s East-Asia Pacific qualifying tournament to get some practice. After a 170-run win over Samoa in their opener, however, they went undefeated to book their place in the U-19 World Cup, which starts on Friday. The team includes five players of Indian origin and several with mixed heritage, reflecting Japan’s slowly increasing cultural diversity. “Cricket is an international sport and with the changing Japanese domestic demographic, this is what the future is going to be,” said JCA chief executive Naoki Alex Miyaji, who has a Japanese father and Scottish mother.

Miyaji pointed to the success of Japan’s rugby team at the 2019 World Cup, where a squad featuring 16 players born outside the country reached the quarter-finals for the first time. “We need to change and see that traditional Japanese thinking is not going to help Japan in the future. Japan needs to open up a bit,” Miyaji said. “We need to learn (from) … the really good reception from the Japanese people after the World Cup. Those players … are Japanese, they speak the language and they represent the values that people can relate to.” In a bid to increase the number of people playing cricket from the current 3,000, the JCA have targeted two “Cities of Cricket” – Sano, which is 80 km (49.71 miles) north of Tokyo, and Akishima, which is to the west of the capital.

“Rather than throw a massive blanket over Tokyo and capture everyone we can, we have gone for a more targeted approach,” said the JCA’s head of operations, Alan Curr. “We got cricket into the schools and set up the junior Cricket Blast programme. It is six-a-side, fun cricket where everyone gets a bat, everyone gets a bowl. It is all about being inclusive and having a laugh.” The programme has produced 11 of the 14 players in the under-19s squad including Kazumasa Takahashi, an all-rounder who debuted in Japan’s senior team the day after his 15th birthday.

Living the dream: Japanese cricket is keen to differentiate itself from the harsh, disciplined approach to training at junior level in baseball and other more popular sports. “We want to be seen as a Japanese sport, of course, as we are a Japanese organisation ultimately, but there are parts of Japanese sport we aren’t particularly fond of,” Englishman Curr added. “Kids should be kids.” Curr recently took the squad on a whirlwind 10-day, five-match tour of Australia to prepare for the World Cup and vice-captain Neel Date said he was living the dream. “Playing international cricket in some form was always a huge dream for me, and the under-19 World Cup is making that dream a reality,” the 18-year-old said. Date, who has Indian heritage but has lived in Japan since he was an infant, said his love for cricket had begun to rub off on his Japanese school friends.

“For them, my name has almost become synonymous with cricket,” said Date. “They are immensely proud of my pursuits and I know they will be following my cricket in South Africa very eagerly. “They may be even more excited for the World Cup than I am.” Regardless of how they perform in South Africa – where they have been drawn in a pool with Sri Lanka, New Zealand and defending champion India – the players hope this is just the beginning for cricket in Japan. “It will be a matter of utmost joy to see not just expats but also Japanese kids playing cricket in the park like we did when we were 10,” said Date. If I get to see this sight 20 years from now, and know that I contributed a tiny fraction to make the situation of cricket in Japan that way, it would be boundlessly satisfying to experience.”