Sunday mornings do not normally start like this. At 9am sharp, we march across the crisp snow to be greeted by a dozen dogs, yapping and jumping. These are Alaskan huskies, especially bred to charge across the icy wastes, sleds in tow.

We are on the final day of our long weekend in central Norway during which we have skied cross country, past lakes and forests, trekked up and down slopes in snow shoes and enjoyed a torch lit, horse drawn sleigh ride.

When it comes to the dogs, my wife, Lucy, insists on taking the reins while I lie inside the sledge, wrapped in furs. No sooner do we turn the first corner than we take a flyer and Lucy tumbles into the snow. I burst out laughing as I end up on the ground.

Now that it’s my turn to take the reins, the dogs guide effortlessly along the track. At least that’s my version.

From the moment we step onto the train in Oslo, hugging the banks of the country’s largest lake, Mjosa, and past the Olympic town of Lillehammer, we’re closer to nature than on any of the downhill skiing experiences we’ve done.

Our journey ends in Venabu, close to the national park at Rondane. Just outside are a few huts to rent and a couple of ski hotels. Ours, Spidsbergseter, is run by the third generation of the same family.

Cross-country skiing is something Norwegians do with consummate ease. They start at primary school and are still at it six or seven decades later. A two or three-hour hike on skis is considered a normal Sunday outing. On our first morning, Julia, our guide from the hotel, reacquaints us with the basics. I had crosscountry skied before, but I might as well have been a beginner. 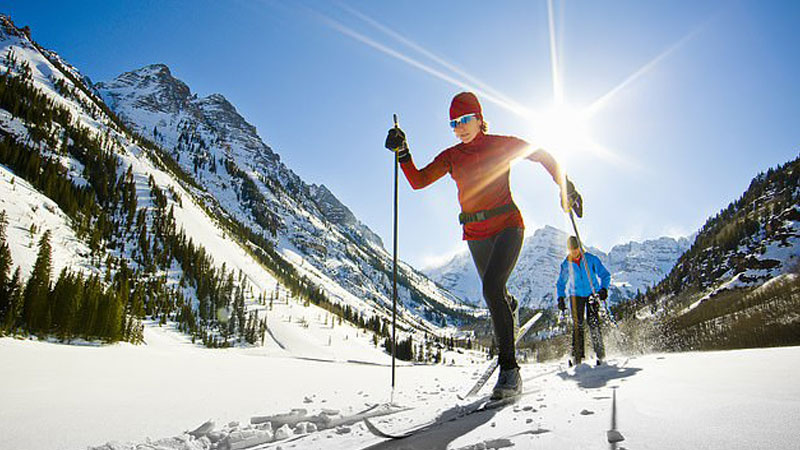 The skis feel like matchsticks, with no grip. We are told to thrust forward, left leg with right arm and vice versa, lifting the heel for momentum.

Once I get the hang of it, I look up and admire the birch trees as the huge silken skies engulf me. Even though it’s a holiday weekend, we go for long periods without seeing a soul.

On our second morning, we are on our own – and decide on a 12-mile route. A couple of hours later, we are bathed in sweat, worn out and still far from home.

We are soon overtaken by an energetic family of four, who tell us they come every year from Aberdeen. They share their chocolate bars with us and show us a shortcut – up a steep hill.

By the time we make it back, I’m being overtaken a succession of Norwegian pensioners, offering a clipped ‘good morning’ as they breeze past.

Despite this humiliation, the world of cross-country skiing seems so appropriate our increasingly eco-conscious world. After all, who needs ski lifts and chic resorts, when all that’s is a pair of matchsticks on your feet and strong lungs?