As he is about the face an impeachment trial, US President Donald Trump will be able to tout a trade deal with China 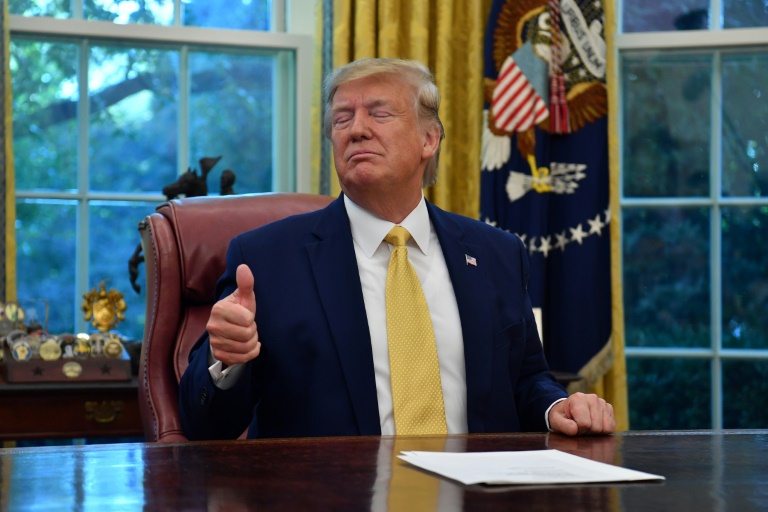 The world’s two dominant economic powers, the United States and China, are poised to sign a trade truce Wednesday that will allow businesses around the globe to breathe a sigh of relief.

Although tariffs on hundreds of billions of dollars of two-way trade will remain in place, likely at least until after President Donald Trump faces reelection in November, some of the uncertainty will go away.

And just as he is about to face an impeachment trial in the US Senate, Trump will be able to crow about a victory with his “phase one” agreement that includes pledges from China to beef up purchases of American crops and products, at least in the short term.

That has boosted stock markets worldwide in recent days, as it takes the threat of new tariffs off the table for now.

“He’s delivering on all his promises, and he is building a great economy for American companies and American workers,” Treasury Secretary Steven Mnuchin said late Tuesday on the eve of the signing.

I think phase one is an enormous step in the right direction,” he said in an interview on the Fox Business network.

However, the most difficult issues remain to be dealt with in “phase two” negotiations, including massive subsidies for state industry and forced technology transfer.

And even the achievements in the deal take the relationship back to where it was before Trump took office, restoring elements he scrapped.

“The US-China phase-one deal is essentially a trade truce, with large state-directed purchases attached,” economist Mary Lovely said in an analysis. “The truce is good news for the US and the world economy.”

Still, the trade expert with the Peterson Institute for International Economics, cautioned that “we will continue to see the impact of this in slower investment and higher business costs.”

US officials have said they will release details of the agreement set to be signed at a White House ceremony on Wednesday.

After announcing the deal December 13, the US canceled a damaging round of new tariffs that were due to kick in December 15, and promised to slash in half the 15 percent tariffs on $120 billion imposed September 1, on consumer goods like clothing.

Mnuchin dismissed a Bloomberg report that the initial agreement could include provisions to roll back more tariffs on China after the election.

“The tariffs will stay in place until there is a phase two. If the president gets phase two quickly, he will consider releasing tariffs. If not, there won’t be any tariff relief,” Mnuchin said on Bloomberg TV.

“It has nothing to do with the election or anything else.”

Washington said Beijing agreed to import, over two years, $200 billion of US products above the levels in 2017, before Trump launched his offensive.

Trump has repeatedly touted the trade pact as a boon for American farmers, saying China will buy $40 to $50 billion in agricultural goods.

US farmers were hit hard by the tariff war — notably on soybeans which saw exports to China plunge to just $3 billion from more than $12 billion in 2017. The Trump administration paid out $28 billion in aid to farmers in the last two years.

But many economists question whether they have the capacity to meet that demand.

And Lovely raised a question about the wisdom on relying so heavily on the Chinese market.

“It also means Chinese retaliation could be reinstated, dampening farmers’ willingness to invest to meet the very hard export targets in the deal.”

US and Chinese officials say the agreement includes protections for intellectual property, and addresses financial services and foreign exchange while including a provision for dispute resolution, which Mnuchin said will be binding for the first time.

Trump in August formally accused China of manipulating its currency to gain an advantage in trade and offset the impact of the tariffs.

The label was removed earlier this week.